Holiday Shopping for the Archiphile: Computer Part cities; photography books up to 50% off, 3D Chicago, and something for someone who has everything

Still shopping for the holidays?  (I usually wait to start until the 26th) 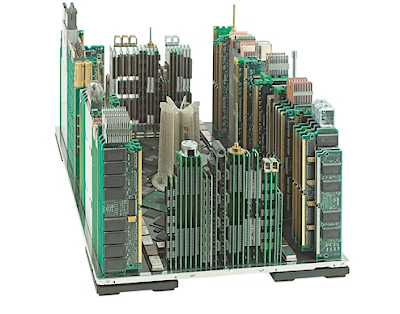 click images for larger view
Via Rib Bone Production's Andy Spyrison, we bring you the work of Italian artist Franco Recchia, which scavenges the innards of computers to create abstracted cityscape sculptures, named after New York's Manhattan, Fifth Avenue and Central Park, Tokyo's Pechino District, Boston and Pitsburgh.  No Chicago yet.  It looks like you can actually buy them on-line.  Prices range from  $2400 to $8100.  Maybe there's some Chicago computer geek with a lot of old boxes to tear apart who might want to test the market with their own more popularly priced creations.  If you're out there, let me know.

If your heart is set on Chicago, and you're comfortable with "some assembly required" taken to the max, there's the 4D Cityscape Chicago 831-piece jigsaw puzzle, complete with 127 plastic buildings, now on sale at the shop at the Chicago Architecture Foundation.  To me, the great temptation would be to redesign the city, jamming selected buildings into alternative locations, or just be able to contemplate a Chicago skyline cleansed of its worst structures.  (Maybe you could resell them on eBay as the "Chicago bad buildings collection".)

And if Chicago's not your cup of tea, there are also 4D Cityscape puzzles for London, Toronto, Las Vegas, New York and Washington DC.  No Pittsburgh.  I've already written that for the month of December, the CAF shop is offering free shipping on orders of $50.00 or over, but it gets better.  CAF members get 25% all purchases during Members Month in December.   If you're buying a lot of gifts, getting a membership could pay for itself.  (Which reminds me, I still have to redeem that coupon for membership that I got on Groupon a few weeks back.)

Elsewhere, we've also written on giving the gift of art from the ArchiTech gallery. I'm pretty sure every Chicago area museum has its own array of great gifts, but the book store at the Museum of Contemporary Photography at Columbia College is upping the ante with a Holiday Book Sale offering "up to 50% off nearly all books! Some books are just $5! (Exclamation points from the original!) It runs through Friday the 10th, 10 a.m., to 5:00 p.m., at 600 South Michigan. "cash or checks only please."

And one, last Neiman Marcus-sized idea*

You can actually get a little plastic version of Santiago Calatrava's Chicago Spire in CAF's 4D puzzle, but for that special someone for whom only the best will do, how about . . . a hole . . .

No, we're not talking about sex reassignment surgery for your significant other, but the only surviving trace of Great Gatsby Garrett Kelleher's insanely ambitious dream for an 2,000-foot-high, Santiago Calatrava designed Chicago Spire. As the Trib's Mary Ellen Podmolik reported yesterday, the Irish developer  has now officially lost control of the property, as a Circuit Court judge has allowed the project's lender, Ango Irish Bank, also in deep doo-doo, to appoint CB Richard Ellis to oversee the property as it goes through foreclosure.

What says "I Love You" better than a 76-foot-deep hole at the side of a rushing expressway?  You might even considering licensing one of the winning ideas in the Chicago Architectural Club's Mine the Gap competition from earlier this year to gussy it up.


But I'm warning you now: it's going to be a royal pain to wrap.

*taken from an ad placed by Warner Brothers to begin selling tickets to the Palace Theater's 1964 run of the film version of My Fair Lady, nearly a year before the opening.  Image-starved and text heavy, it concluded with the "Neiman Marcus-sized" suggestion of simply buying out the theatre for a personal showing for yourself and your closest friends.