Of timelessness and kitchen timers (and really bad video): Michael Graves in Chicago


As you can see from the above video, done in my usual seasick-on-a-listing-ship style, last Saturday, March 24th, Dean of the Notre Dame School of Architecture Michael Lykoudis and Richard Driehaus presented architect and designer Michael Graves the 2012 Richard H. Driehaus Prize honoring "lifetime contributions to traditional, classical, and sustainable architecture and urbanism in the modern world."
Although the event at times veered into a ritualistic Counter-Reformation excoriation of the errancy of modernism - held appropriately in Benjamin Marshall's classically informed John B. Murphy Auditorium - meets a general  these-kids-today, let-me-tell-you gripe session, there was both uncynical celebration and a cogent expression of the classicist viewpoint.
WTTW's Geoffrey Baer hosted a panel discussion with Graves, author Elizabeth Barlow Rogers, awarded at Saturday's ceremony the 2012 Henry Hope Reed Award, given "to an individual working outside the practice of architecture who has supported the cultivation of the traditional city, its architecture and art through writing, planning or promotion,"  and New Yorker architectural critic Paul Goldberger
In introducing Michael Graves, architect and planner Andrés Duany talked about the reaction when Graves's design was unveiled for the Portland Building , the calling card for the Post Modernist movement . . .

. . . the fury of the architects of Portland, the kind of attack.  The young don't know and the old sometimes forget the courage that it took to break the certainties, and what it was like to be met with opposition, with innuendo, and with silence.  And he has always been extraordinarily courageous all his life in what I now understand from Vincent Scully is the great open mindedness that Post Modernism represents.  He is a hero in that regard.

The current teachers, the teachers now, lead the students - to themselves.  "Be like me."  Which is alright, if you've done it 10,000 times, but some of the teachers I know are not even in their 30's.  They're saying "Be like me."  And it's like the children leading children.  It's absolutely astounding.  And so the kids pick up the most awful habits of ego and very, very partial knowledge.  "If I can just get that one gimmick published, which made my teacher famous, there I shall also be.". . . The tragedy is that they're never taught how to learn.  What Michael did was not tell us what he did. He taught us what he had learned,  what he had learned from others.

Graves, himself, talked about a student who was having problems with a project for a residence that used the open or free plan, setting the master bedroom next to the living room, placing kids listening to the radio against parents trying to sleep.   "I have no way to give them acoustical closure," Graves said the student told him in despair.  "The space just couldn't handle it, nor could my plan."


I said, "Did you ever try making a room?" You have to know that those were blasphemous words.  You could not make a room.  You had to make space.

Both Duany and Graves talked about the Stockholm Public Library by Gunnar Asplund as a prime example of the continuity of history into contemporary architecture, where you rise up into the great reading room.  "You go through an Egyptian door," said Graves, "as if that's the beginning of civilization.  You go past a Greek rail.  And finally up into a Roman room."

Graves also talked about having just visited, for the first time, Renzo Piano's Modern Wing at the Art Institute of Chicago. 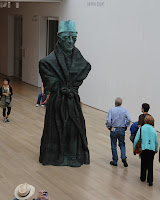 I am struck by the difference in the way he would do something and some of us do something of like size.  Not that it's a bad building.  It's simply a building without a soul.  I took that long walk along the passage that lets on to the galleries on the side and I thought, it's empty. There's only a rather odd piece of sculpture of Hamid Karzai.  . . .  I thought that in the old days, this would have been the hall of armor.     We don't do that anymore.   I suppose there's no reason for them to build the Modern Wing again, another addition, because they have this to fill up now.

Don't take that as negative criticism, folks.. . .  Think of that long corridor at the Art Institute and the one at the Metropolitan Museum in New York.  The difference, the way clerestory light then infuses the space and gives particularity to that below it is something we all learned from lessons of other people. 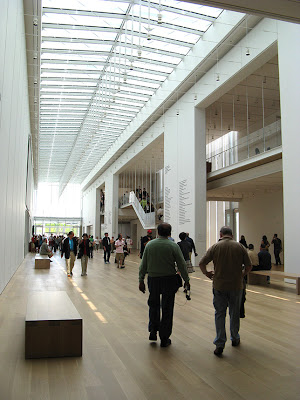 What I missed at the Art Institute . . . There wasn't the moment when light came in at a specific place.  Everything was general . . . The whole thing is the window.  That's like saying the whole thing is a wall.  There are good walls and bad walls, but most good walls have windows in them.  And there are specific places relevant to your body drawing your body next to the window  In Renzo's building, it starts at your feet, and ends at the slab above.  It starts at the wall and ends at the wall. ...... It isn't right.  It somehow should have been joyous, and he thought by making all that light, it would be joyous. And I'm sure people love it.  Some people really, really must love it.  Because it makes no mistakes.  That is one way of doing it.  And it isn't wrong.  It just could be righter.

There was also discussion of Grave's designs of household products, with Baer bringing a copy of the famous teakettle Graves designed for Target, and Goldberger lauding the way Graves reimagined those products in a "slightly cartoon-like but very affectionate way, and also very user-friendly, to say that the utilitarian kitchen object can also be emotionally engaging and connect us to a larger tradition is the message I think those pieces have."

My interest piqued by Grave's discussion of design, I went over to Bloomingdales to compare kitchen timers.  To the left is the DesignWright timer made for Joseph Joseph ($13.99), in the middle the Michael Graves timer designed for Alessi ($40.00).  To the right is the ladybug timer from Kikkerland that I picked up for my mom for about $8.00 at Bed, Bath and Beyond.  The Graves Alessi timer - much bigger than the Joseph Joseph - is charming, but I wound up buying the Joseph Joseph and not just because I'm cheap.

I suppose you could say that, compared to the Graves, there's a learning curve for the hockey puck, but it's pretty short.  You wind it up by turning the top, which then displays the time it's set for.  With all due respect to Michael Graves, it's no more difficult to tell top from the bottom than in Grave's design.  You master the difference the moment you take it out the box.  With two screws and the designer's name and small text stamped in plastic, the bottom proclaims its underside status clearly.

And you don't necessarily have to look down at the top to read it.   Since it's round, you can easily prop it up to see it from a distance, and because the time being counted is represented in white as a diminishing visual fraction of a round clockface, you have a good idea how much time is left even if you're not close enough to read the numbers.  The only real flaw I found is that the bell isn't very loud.  Graves described the design as clever, which wasn't meant as a complement.

Actually, when I asked the extremely gracious sales assistant at Bloomingdale's which timer she usually    recommends when asked, she said it was neither the Graves or the Joseph Joseph, but a simple digital timer with big digital numbers: more than a little homely and completely unfashionable, but easy to read and easy to operate.

I get a little different message than Graves does from his story about Armani and Joseph Joseph.  There's a difference between a designer phone - someone like Giorgio Armani adding another trinket to his branded universe - and a phone whose design is thought completely afresh by a genius like Jonathan Ive.  Real design is not an applique, but an essence.  I get the impression that in Grave's view, the original Blackberry smart phone would be better because it was traditionalist.  It had a keyboard just like a typewriter, and it's basic profile was not unfamiliar.  But it was more of a graft than a synthesis.  The keys were teeny tiny, the display small.

Enter the iPhone, which actually took the time to reconsider what a smart phone was and could be.  The mechanical buttons were replaced by a touchscreen, which could, in turn, be much larger than that of a Blackberry.  Like a good Beaux Arts plan, there was an easily understandable path back and forth through its increasing number of functions.  It replaced the traditional contagion of drop-down menus with the swipe and a single button.  When the iPhone first came out, there was no shortage of analysts who were sure it would be a failure, because it was different.  Yet it triumphed, because it was better.  Not as uplifting as timer shaped like a ladybug, maybe, but close. 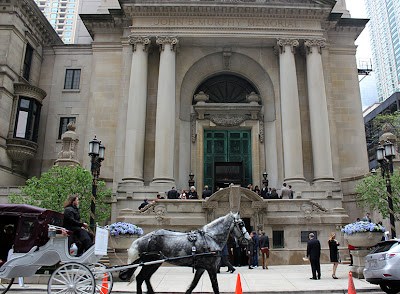 An excellent writeup of the event and interesting commentary. Thanks to your previous posts, I was able to attend on Saturday.