click images for larger view
Spring was in the air Wednesday - for all about two hours.  What better time not to do necessary work?   So, the March calendar isn't quite ready yet.  I forgot to feed the cat and he gnawed away the "M" key on my keyboard.  I don't think it agreed with him, 'cause when he thew up, it was only an "N". Maybe the rest will come out later.

So here's a heads-up that today, Thursday, March 1st, the Commission on Chicago Landmarks holds its monthly meeting at 12:45 p.m. in the City Council chambers, 121 North LaSalle, Room 201-A, marking still another month of being missing-in-action on the most important preservation issue currently in play in Chicago:  protecting Bertrand Goldberg's iconic Prentice Hospital from Northwestern's determination to destroy it for an empty lot.

Over at the Millennium Room at the Chicago Cultural Center, 78 East Washington, at 12:15 p.m., Friends of Downtown puts on its monthly brown bag luncheon lecture (white bags also ok, clear plastic, no - nobody wants to have to look at all the stuff you're about to eat).

Ty Tabbing of the Chicago Loop Alliance will "present a talk on the history and the remake of State Street over the past two decades, including the removal of the mall."  Tabbing had written to us last November, when we had some rude things to say about the Alliance's Lightscape project, that the Alliance's Pop-Up Art program, using the windows of empty storefronts as temporary galleries, was still a going concern, and he's proven true to his word.

Pictured at the top of this post is a Pop-Up display of Scott Williams "past and present screen printed posters that have a heavy r&B/soul feel.  His posters have gained a cult following here in Chicago."  It's on display 24/7 in the street-level windows of the long-empty Holabird and Roche Century Building at 202 South State, owned by the Federal government.  With the new canopy and display windows, the GSA has turned what was once a derelict corner with rotting scaffolding into a handsome Loop amenity.

There's also, Artists Without Borders, the work of Liz Miller and Baltazar Castillo in the windows of the former Borders store at 150 North State.  I was looking at the work in one of those windows when a guy came up to me - "Hey, I see you looking at this.  You know, I was in the alley across the street over there by the theater and I looked down and I saw this piece of wood and it was shaped just like a dagger.  It looked just like this art in the window here, see?  I was thinking of just laying it down in front of the window, but then I said, nah, that wouldn't probably be right." 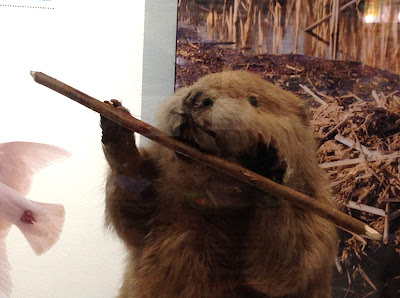 from  the exhibition, Loop Value: The How Much Does it Cost? Shop, at the Chicago Architecture Foundation, 224 South Michigan


So I have to go back to the calendar now, or maybe just lie down.

Lie down. Can't do nuch when you're N key has been chewed into an N but a hungry cat.