CTA's Attack of the Street Walruses

This is what $100 million looks like.  It's a rendering of the replacement 8800-square-foot mezzanine for the Red Line Clark and Division subway station, originally opened in 1943 and largely unrejuvenated ever since.  That's up from the $86.6 million price tag quoted in a CTA press release just this past January.  If the new station lasts as long as the old one, and assuming half of those using the station will be boarding and paying a fare, it will cost 50 cents for every one of the 4,000 per-day passengers over the next 70 years.  (The CTA is projecting usage will double.)   But then again, a CDOT flyer distributed by 42nd ward Brendan Reilly this past weekend quotes a cost of $41.3 million, so we've already made over half of the expense disappear. 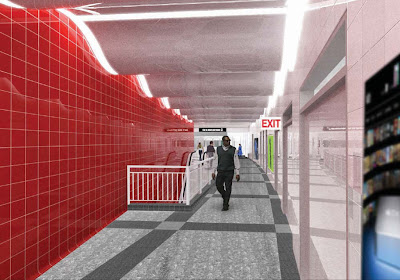 As with the Chicago and, most recently, Grand stations on the Red Line subway, the contrast between the old, dank and dreary stations and their replacements is like night and day.  The platforms, while constrained to the original size, appear more spacious and welcoming, and the mezzanines are, in physical fact, vastly increased in size and openness.  Below ground, everything is sleek and modern.  It's only when you move above ground that you get this . . . 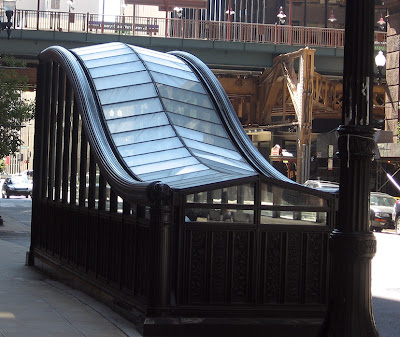 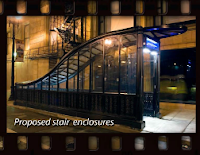 Call it Daley retro.  Word got out during the reign of Richard M. Daley that the mayor was partial to "traditional" design, and while the rap wasn't entirely deserved, the result was a lot of unnecessary pandering with such things as the Botero-limbed bus shelters designed by Robert Stern, and the street enclosures for escalators and stairs up from the subway.

The best that can be said about them is that they're lighter than the box they came in . . . Other than that, could anything be more maladroit for a city that prides itself on its design?  Encountering one of these objects is like walking down the street and finding a giant walrus lounging on the sidewalk, loudly braying at passersby.

Is this really the best we can do?  As proven by the recently opened Ross Barney Green Line stop at Morgan Street, and this design concept for the intended Loop L station at Washington and Wabash . . . 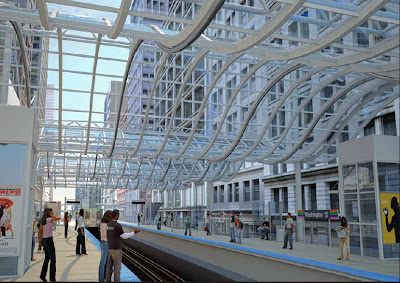 . . . the answer is, clearly, no.  The way they dominate the sidewalk view, these subway entrances are more than just enclosures - they're emblems, and brazenly dishonest ones, at that.  They misrepresent the bright, streamlined design to be found in the actual station below.  In this "less is more" city, they're like giant billboards refuting Chicago's pretensions to architectural excellence.  On pain of fines, you're expected to clean up after your dog no matter how big the turds, but these huge, stinking - and inescapable - excrescences seem to enjoy blanket immunity. to plop at will. 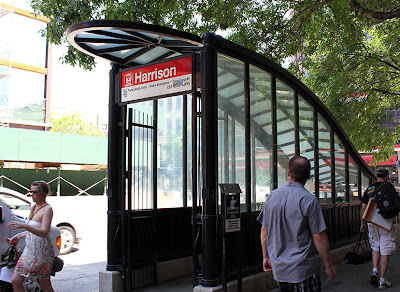 At these prices, the CTA and CDOT need to step up to the plate.  Chicago deserves better.

I believe that the Clark & Division stop is being moved one block to the west (for reasons I'm not clear on). That is why the station is so expenxive. It is completely new, rather than just a renovation. I'm assuning they will keep the old station as an auxillary entrance, but I could be wrong.

As I read it, the LaSalle entrance is an addition. The existing Clark and Division mezzanine will remain and be renovated.

I share the same sentiments for those "street walruses" but I have to say that it's important we keep at least one of the 1940's stations. Some may feel dark and gloomy, but give it a decade or two and their moderne design will be appreciated for their historical value just as much as the Quincy brown line. Especially as stations like the Monroe Blue Line represent the first era of the underground transit system in Chicago.

i agree with anon - while the original stations definitely need some updating. i really love the over-sized subway tiles with the station name embossed in them.

I agree, I love the Art Moderne stations and believe they should be restored and not altered, adding handicapped access. I hate the dated contraptions they put on top of all the stations they do major work on. Restoring Clark and Division would leave enough money to restore many of the other beautiful Moderne stations. I might be alone on this, but I hate what happened at the Apple station at North/Clybourn. It has lost all its character-once it looked like it was part of the London tube now it looks suburban. Love the new Morgan station!

I agree about the stations already looking dated. The wall tile at the station level of the newly renovated Grand/State station is not very attractive. It looks as if it were installed in the 1990s, but no, the CTA just installed it.

Rularle 13The extension to LaSalle, presumably with a block-long pedestrian tunnel, makes little sense to me. Why put a street to mezzanine elevator there instead of at Clark street?

While pretty renderings are nice, it would be very useful to see schematic plans and sections to make sense of what the City plans to do here.

The LaSalle mezzanine will include NEW access to the platform. You will not be able to go between mezzanines except via the platform. I believe the new entrance is intended to better serve the rapidly-developing areas to the west and avoid the complex, costly construction staging that happened at Grand.

Lynn, there is a very attractive Modernist station entrance at Lake and Wells. The mezzanine at this location is also very modern. It's a pity we don't build more like this. Also, Logan Square and Belmont are vintage Modernist subway stations.

ardecila said... "The LaSalle mezzanine will include NEW access to the platform. You will not be able to go between mezzanines except via the platform. I believe the new entrance is intended to better serve the rapidly-developing areas to the west and avoid the complex, costly construction staging that happened at Grand."

An interesting challenge getting across the southbound tracks to the platform! It could be done with a deep pedestrian tunnel like that at Jackson, but I've not seen that mentioned. Again, drawings would be good to see.

Very disappointed with the mezzanine level. I, too, wish they would simply restore the design that is there now. Tired of the designs employing undulations to convey modernity--looks quite silly.