Jeanne Gang updates Freud: Will Tell - Not Ask - "What Mammals Want" at the Logan Center 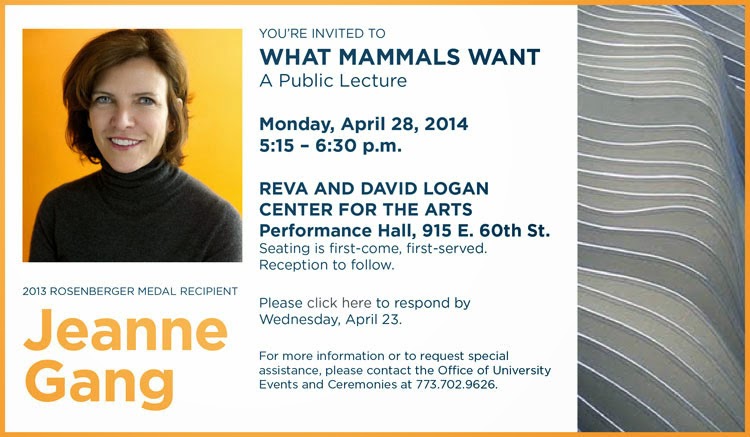 Sigmund Freud finally admitted he didn't have a clue . . .


The great question that has never been answered, and which I have not yet been able to answer, despite my thirty years of research into the feminine soul, is 'What does a woman want?'

Was it that he didn't know or that, push to shove, he wasn't all that curious?

Alexander Pope wrote, “The proper study of Mankind is Man” but his words became less an invocation for deepening human knowledge than a license for an geometrically accelerating stream of narcissistic rationalizations for our appetites and aggressions.  Now that our technology is giving us an unprecedented and frightening domain over the earth's ecologies, might we be better off, as we send species after species hurling towards extinction,  spending a little less time in infatuated self-contemplation and a lot more studying the living things with which we share not just the world but the fundamentals of our animal nature?

To sell a great story, a great headline is half the battle, and architect Jeanne Gang has certainly picked a provocative one for her April 28th lecture at the Reva and David Logan Center for the Arts on the University of Chicago campus.  The flyer, shown at the top of this post, sends mixed signals.  First it says seating will be first-come, first served, and then in the very next paragraph asks us us to click to respond to the invitation by April 23rd.  The flyer is a jpg, so clicking the link goes nowhere.  If we get more information, we'll pass it on.
I have no idea what a lecture called “What Mammals Want” will be about.  Almost certainly it will nothing to do with my own musings.  But when an architect declares they are going to give a talk that has neither “Form”, nor ”Autonomy”, “LEED”, ”Theory”, “Parametricism” or even “Architecture” in its title,  and it references humans only by their parent class, well, that's a very interesting proposition.

Gang was last year's recipient of the U of C's Jesse L. Rosenberg Medal, recognizing achievement “deemed of great benefit to humanity.”  Yet, Gang will be at the Logan Center Performance Hall, 915 East 60th, at 5:15 p.m. on Monday the 28th, telling us - not about humanity - but about the Mammals.  And what they want.  And what it might have to do with us.

Mammal is not a species.