Schizoid Plaza: What Does Illinois Center Want to Be? Another Answer Emerges


It was last August when we last wrote about the changes at one of the best-kept secrets in Chicago - the raised plaza at Illinois Center.  While the cold and unwelcoming shopping arcade on the lower level has long been the object of disdain and revulsion, the under-used plaza just one story up was the saving grace of Illinois Center, a collection of look-alike glass box office towers begun under the office of Mies van der Rohe and completed by his successor firms in the 1970's. 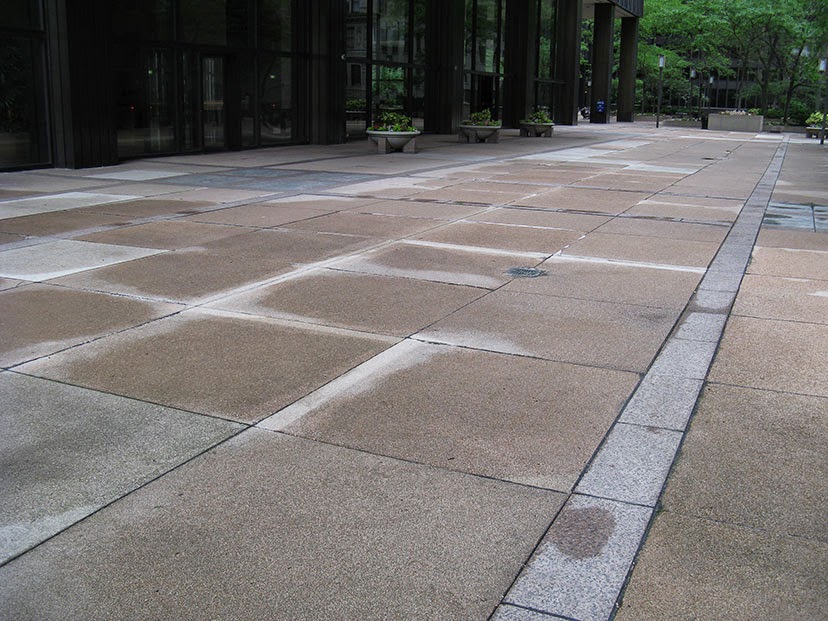 Down through the decades, the plaza's original paving, following a geometric pattern that synced with the Miesian grid of the buildings, grew derelict through wear and poor maintenance.  The first renovation came in 2011, when the paving on the northern half of the plaza was ripped out and replaced with a seamless - and boring - carpet of herringbone pavers.

Last year, work began on the south half of the plaza, a collaboration between Goettsch Partners and Wolff Landscape Architecture.  It's still under construction, but after many long years of being shuttered, the great stair on South Water Street is now open again.  We're still waiting to see if the day-glo magenta seating depicted in the rendering actually materializes, but we thought we'd give you some early views of how the thing is turning out. 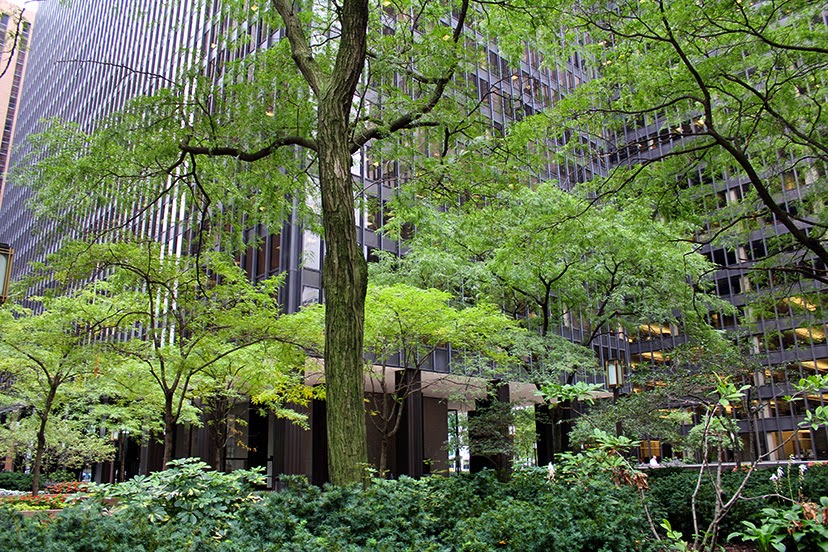 First of all, I really miss the old trees.  Rising, like the towers, high above the visitor's line of sight, they were the objects that provided the brawny counterpoint the taut Miesian minimalism buildings needed.  Unlike the grid-like curtain walls, the trees achieved their own minimalism, but with gloriously irregular, almost improvisatory expressions of form, their decoration not I-beams but a velvet canopy of an infinite variation of green leaves.  The loss of those trees is tragic. 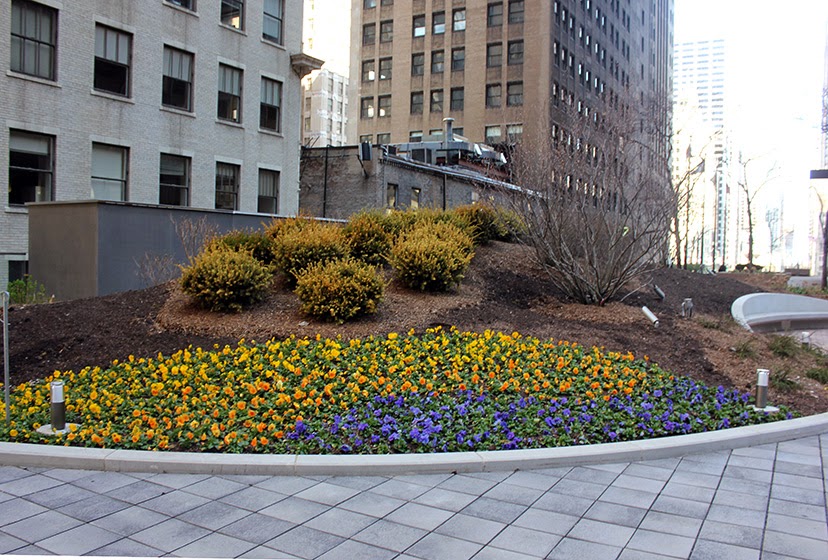 The new plaza design offers up a very different kind of counterpoint.  Rectilinear and flat gives way to curving and bermed.  The rounded, seeping forms override the grid with flowers and shrubs   Long concrete benches, that probably looked more graceful in the drawings that they do in reality, form the hard backbones that anchor the soft, amoeba-like planting islands to the plaza. 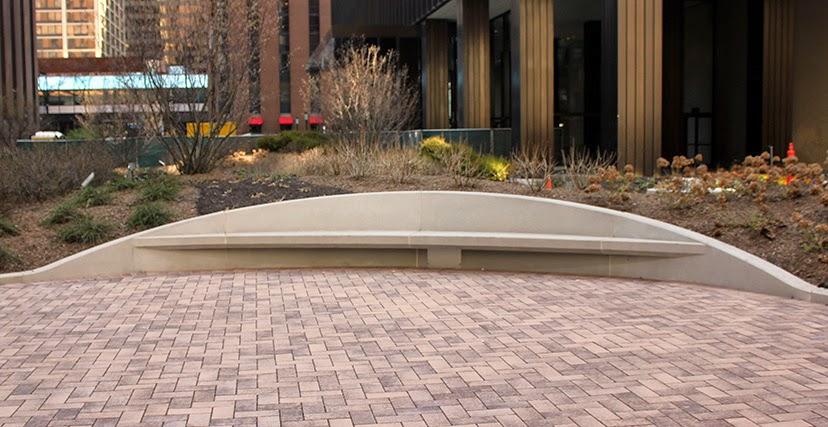 The new design has a passive-aggressive relationship to the buildings. While the old trees were strong enough to compete with the buildings as self-contained installations, the new layout is clearly subservient.  Replacing a rigid geometric pattern of paving that was read instantly and then disappeared from consciousness, there's now a complex interplay of form and materials that defies quick visual resolution.  At the same time, the new design is as insistent as a fog, seeping into the building itself as it wraps around perimeter columns. 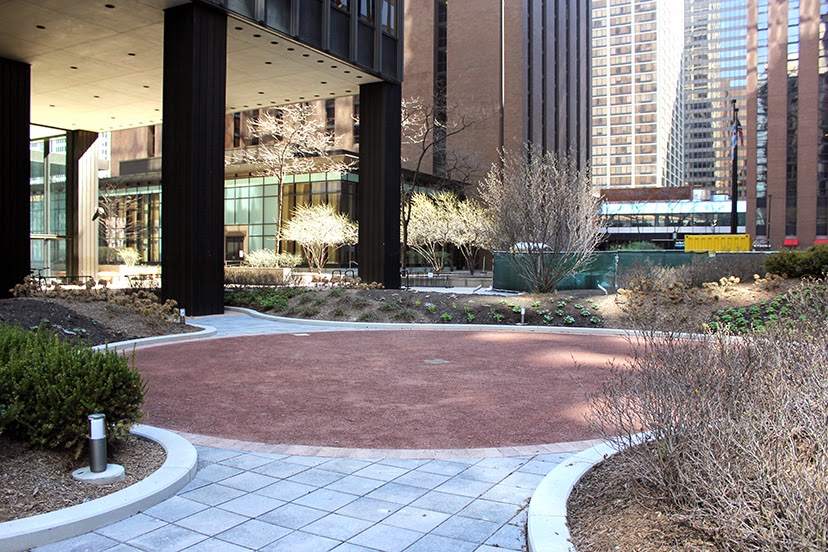 It's too early for a final judgement, as the construction is far from finished.  This past Saturday, the plantings were still incomplete, the shrubs had yet to blossom, and work continued on a massive new steel and glass canopy along South Water. 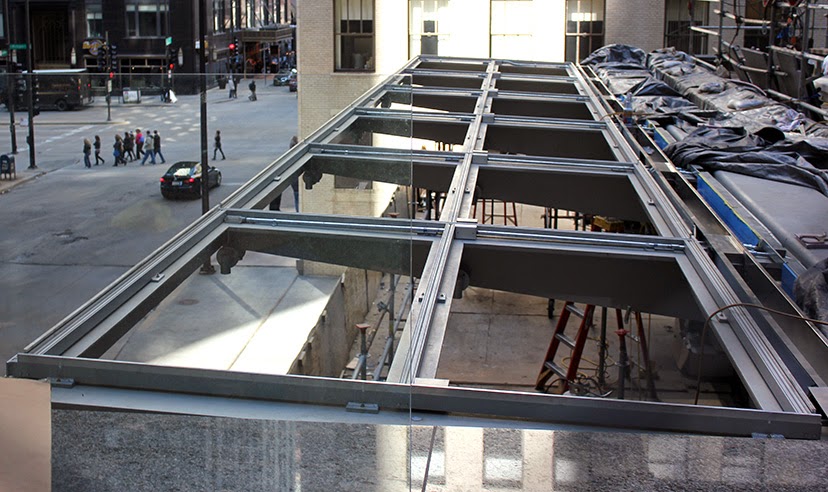 The Illinois Center plaza has become the ‘battle of the landscaping concepts.’  For now, at least, tucked away in a far corner, there's even a remnant of the original Miesian geometry . . . 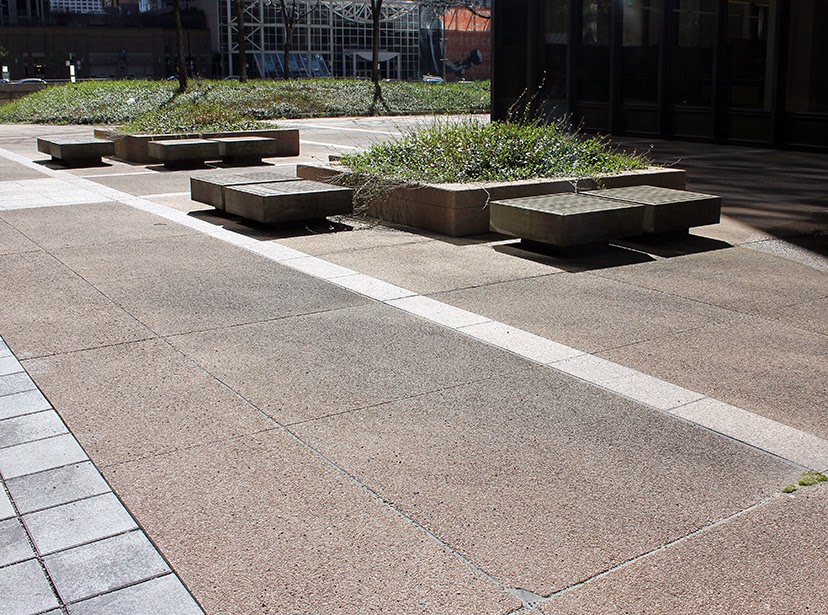 The north half of the plaza along the river showcases the carpet-bombing school of paving - complete with temporary wicker furniture - still waiting for the more active public uses, from exhibitions to outdoor cafes, for which it seems custom-made. 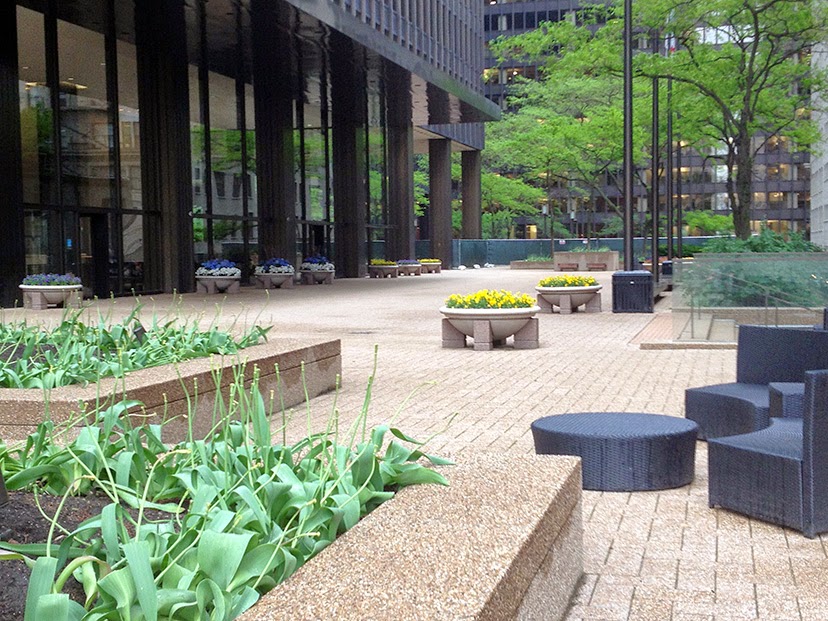 The new southern half, with its clearer relationship to the street below and more irregular plan, now brings a different approach to the party, at once more conventional and more subversive to Miesian purity.  Start writing your angry comments now, because I think I like it. 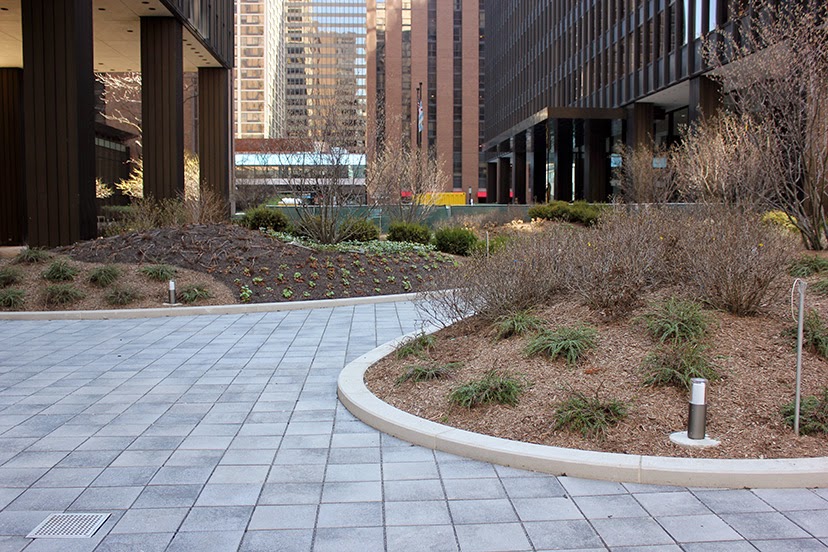