In anticipation of a public meeting on the project on Monday, 42nd ward Alderman Brendan Reilly on Friday released a couple of preliminary renderings for a new 45-story, LEED-certificed hotel project pairing up White Lodging Services with developer Albert Friedman.

When Crain's Chicago Business first revealed the project in February, the site identity was pegged to 740 North Rush, the former Crain's Communications headquarters building best known as home to a very busy Giordano's pizzeria.  As now revealed by Reilly and the renderings, however, 740 isn't being slated for annihilation but truncation.  About half of its Superior Street elevation is set to be demolished for the new tower.  This is not unprecedented.  The landmark 1872 Delaware Building at Randolph and Dearborn, for example, not only had floors added to it in 1888 - several of its easternmost bays were demolished to make way for the Oriental Theater Building. 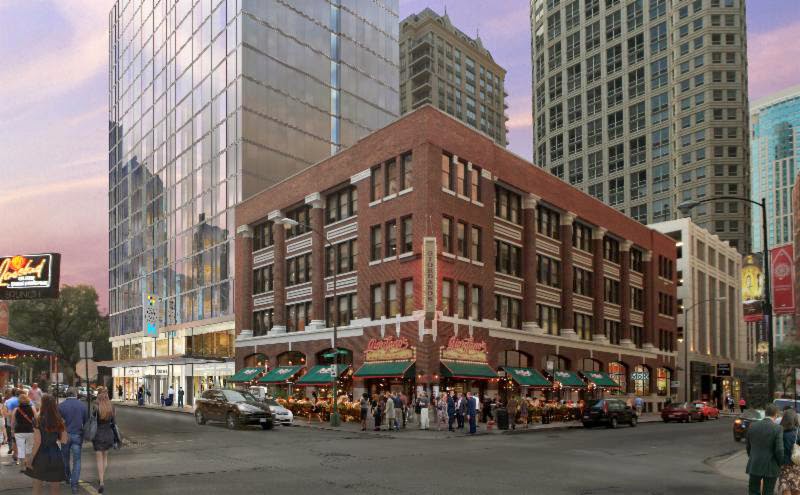 Even less lucky is the blocky seven-story stone-faced structure with three large displays on the ground floor (was it originally an auto showroom?) that currently serves as Giordano's annex.
The Superior Street entrances to the building have been long sealed up.  It seems to be built around a central courtyard, with its footprint extending all the way north to the alley, cutting deeply into the back of 740.
It looks as if the new building will go all the way west to Wabash, which would also spell doom for two older buildings - one which until recently was home to 1492 Tapas, the other what looks to be an 1870's rowhouse housing a number of businesses including Intuition Astrology (do you think they saw this coming?)  At the corner of Wabash, there's a surface parking lot, and a small Chicago Archdiocese garage that once bore signs on the driveway reading “Thou shalt not park here”.  (Update: a reader is reporting that site does not include the buildings closest for Wabash)
Friedman is expanding beyond his usual River North territory, which he transformed from a skid row of seedy bars, decaying lofts and hotels to one of Chicago's trendiest districts of upscale bars, pristinely renovated lofts and - just last year - a Friedman development of three different hotel brands - an Aloft, a Fairfield Inn, and a Hyatt Place - all sharing a single site. 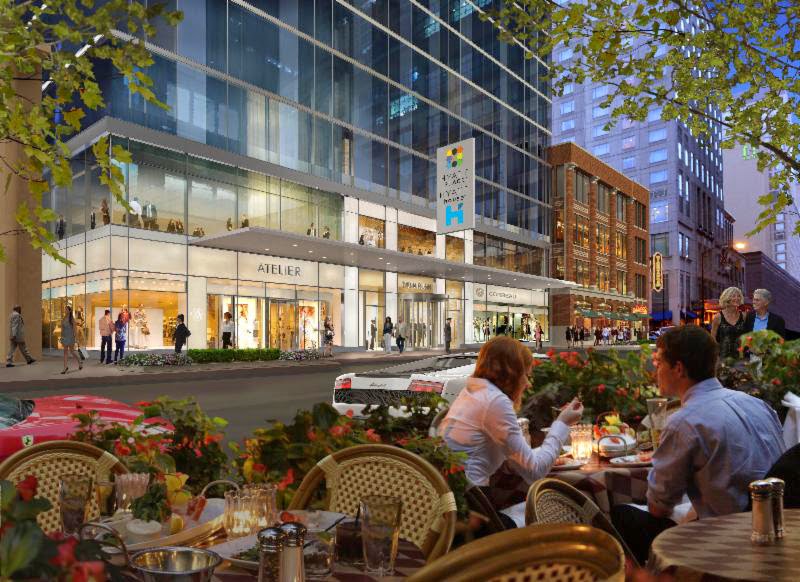 A similar mashup is planned for Superior, countering the high priced Four-Star Peninsula right across the street with an extended-stay Hyatt House and mid-priced Hyatt Place.   At least in the preliminary renderings released by Reilly, the design of the new 45-story tower is numbingly generic, but at least we get to keep the delightfully funky 740 with its long arcades of three-story rounded columns done up in the same brick as the rest of the facade.  In full along Rush, in sample along Superior. 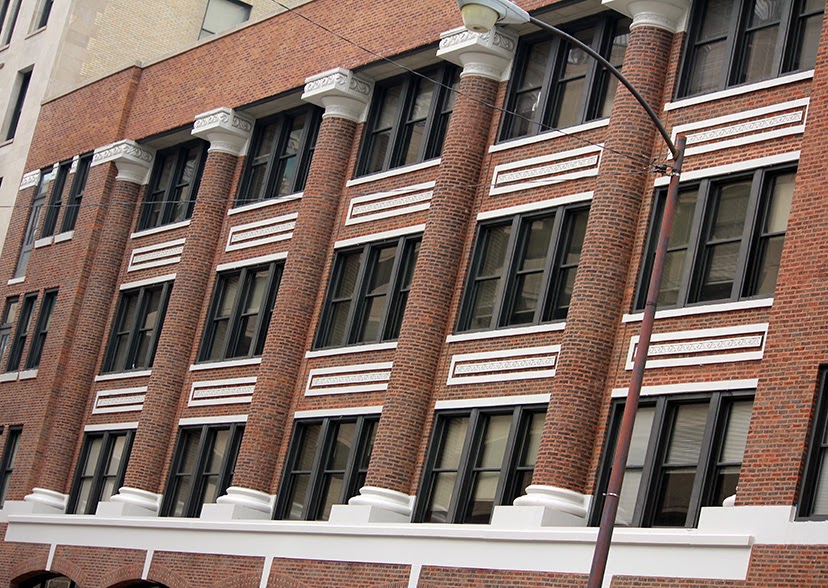 I, for one, would prefer a partial facadectomy to truncation for 740, in order to keep the symmetry of the original design. I think it could make a great podium building along the lines of the Hearst Tower. And, I dunno, they could put a pool on the roof or something, too.

The townhouses are not part of the project. they will remain untouched.