Call it the Facebook syndrome.  The noxious flower, originally cultivated on television by Fox News, has exploded, through social media, into a blanketing culture of perpetual outrage.  No topic is too fallacious or inconsequential to inspire a tsunami of angry screeds - Obama's birth certificate, vocal fry in young women, lap dancing squirrels . . .

And what is Chicago really, really mad about right now?  A set of five 20-foot-high letters that Donald Trump is affixing to the riverward side of his elegant 1,170-foot-high telescoping tower, designed by Adrian Smith when he was at SOM. 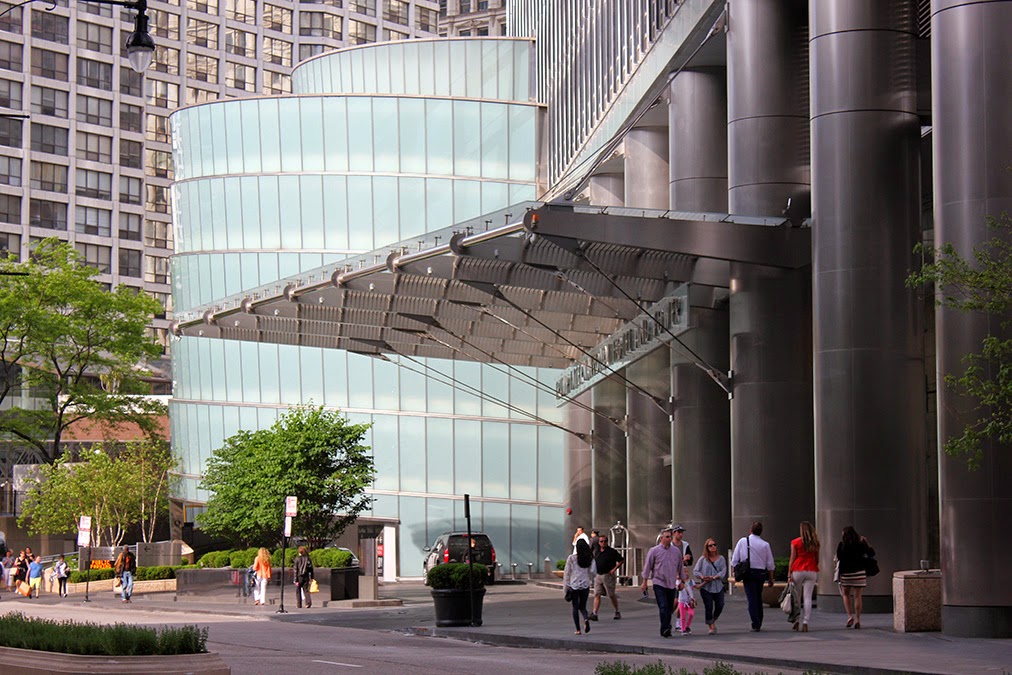 And it's true, the sign scars a handsome building.  You normally don't want to bring attention to the continuous strip of metal louvers of a service floor interrupting a sleek glass curtain wall facade but that's exactly what the 141-foot-strip of letters does, drawing your eye to a visual interruption that would otherwise be subsumed into the larger mass of the building.  We still have to see how the sign will be affected by the LED back-lighting that's part of the design.  It might soften the blow.  It might make it worse. 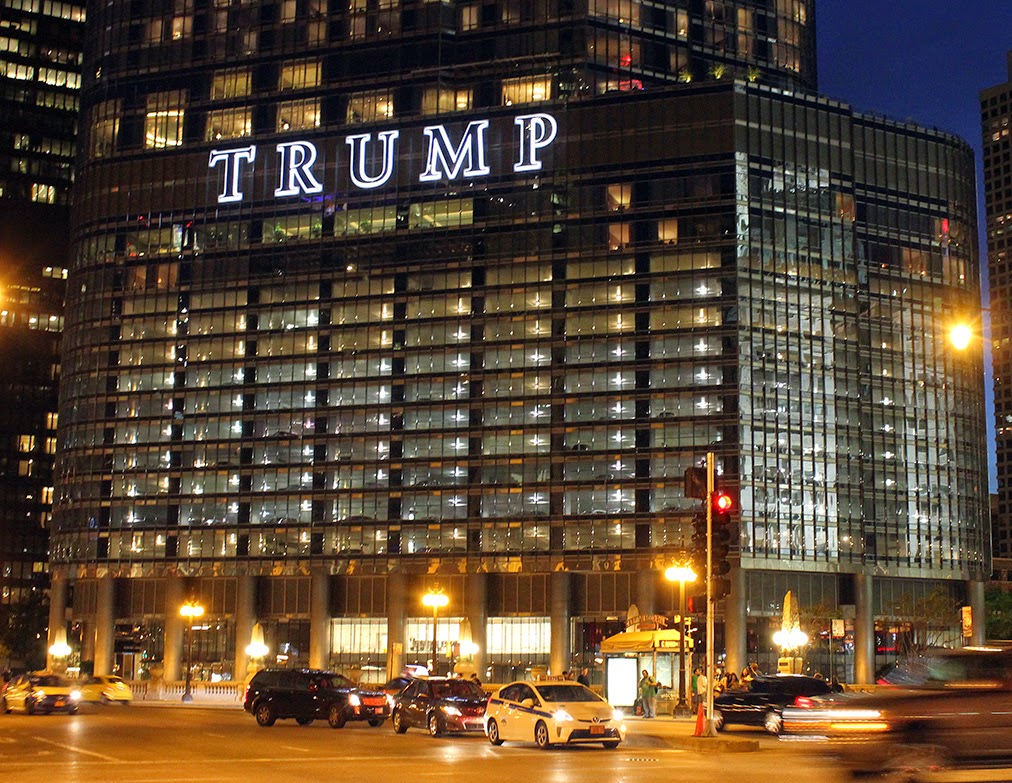 What's evident even now, however, is that the actual letters look astoundingly cheap, like those you'd find in a child's magnetic letter set, bleached of color. 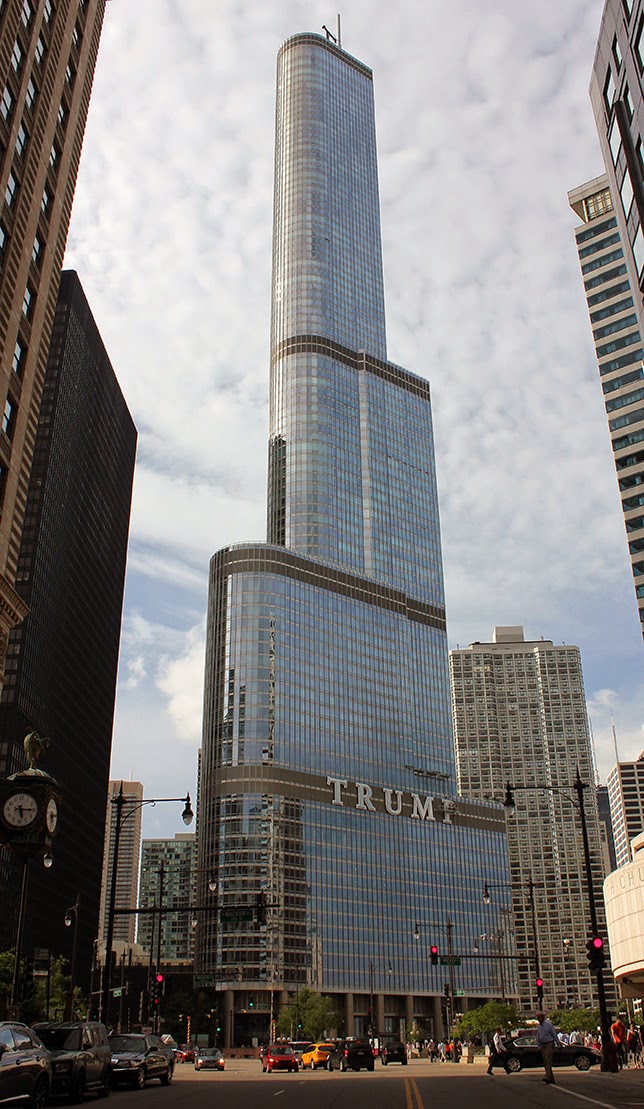 Controversy over the sign has been building ever since it was announced this past February,  but once the actual letters appeared in a couple stacks on the lower level of the Trump Tower riverwalk early in May, the topic has built to a viral meme of increasingly hyperventilating outrage.  Everybody has to get their two cents in.   Chicago Tribune architecture critic Blair Kamin has taken on a Bob Green-like obsession with the topic, writing column after column and making himself the star in an epic battle with the irascible  developer, who has taken the bait by referring to Kamin as a third-rate architecture critic who he thought had been fired.   The Sun-Times's Neil Steinberg felt compelled to enter the fray with his own lengthy screed, calling the sign “noxious” and comparing Trump to Oxymandias.  You get the idea.


Although it took several weeks after the sign going up for him to finally notice it, Chicago Mayor Emanuel has “smelled the meat a'cookin” and moved himself to the front of the anti-Trump line, pre-empting the battle into a “faceoff" between billionaire and scrappy mayor that has taken the media carnival national.   It's send-in-the-clowns time, with idiots of all stripe appropriating the Trump sign as a piece of evidence certifying whatever's their personal scandal-du-jour, with a special Looney Tunes award to right wing pundit Jeffrey Lord, who blithely proclaims “This is about zapping Donald Trump the Obama opponent who dares to intrude on the private political preserve that is the President’s hometown.  There’s nothing more to this little if telling episode than that. ” 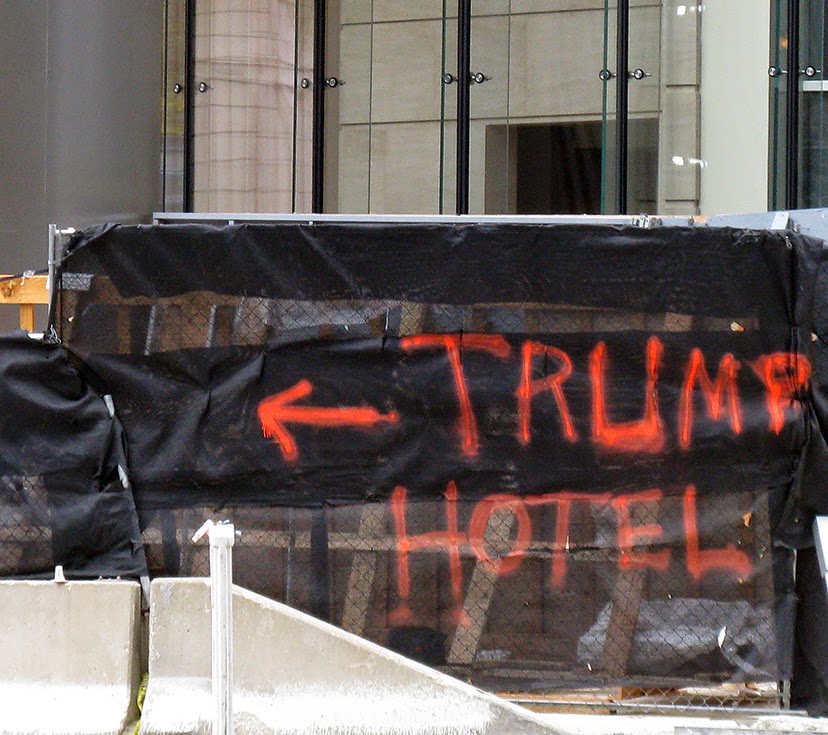 Trump has responded in kind claiming what he's doing is no different than the beloved Hollywood sign, only better.  He compared his sign to the one on the old Chicago Sun-Times building, which Trump Tower replaced, referring it to ”the ugliest sign Chicago has ever seen”, echoing a tweet 42nd ward alderman Brendan Reilly issued to defend his own non-action on the sign . . .

They're both banking on everyone's lack of memory.  In fact, the Chicago Sun-Times sign was actually a not-inelegant relief from what was essentially a metal-faced services bunker at the top of a unfairly-maligned structure that was a showcase building of its day . . .
The unending commentary on Trump's sign has become like one of those amusement park attractions where you poke your head into a hole in a wooden flat imprinted with the images of various celebrities so you can have a picture taken of yourself inserted into the scene.  As important as they may be to those in the frame, there's only so many of those pictures you can see before wanting to shoot yourself. 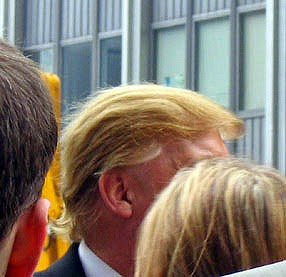 And what does it all accomplish?  To send Donald Trump into a seventh heaven.  Once again he gets his inane observations and sour visage plastered across media stories throughout the world.  He's the
the idiot-King whose empire is kept flourishing by a capable staff who have mastered how to work around their boss and and extract the random good ideas from the daily mound of egomaniacal manure. 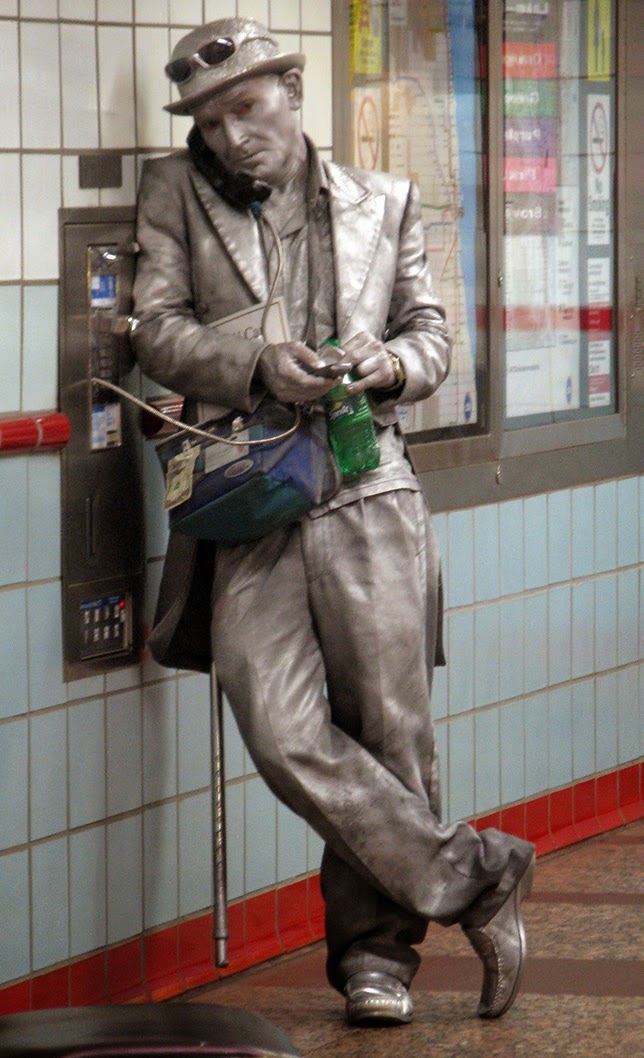 Trump is little different from the street performers you see on Michigan avenue, soliciting spare change from  passersby by dancing, pounding on plastic bucket drums, or painting themselves gray and posing as statues. He just does it on a far larger stage, a trash-talking, cuckoo's nest-crowned living billboard, running on hyperdrive 24/7,  a king-of-all-media busker trolling for attention.  Attacking Donald Trump is like whipping a masochist - the intended victim winds up enjoying it far more than you ever could. 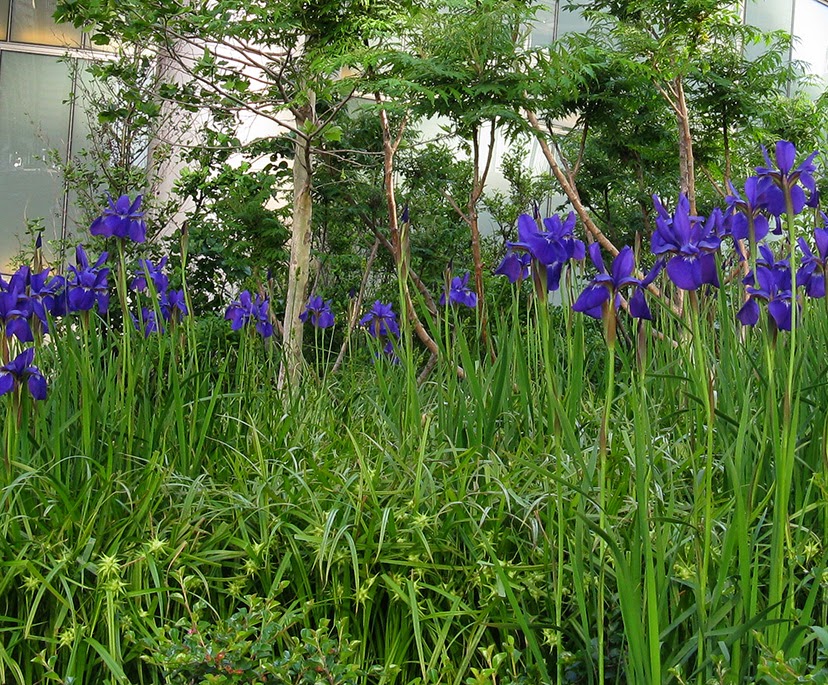 You want outrage?  Start with this, right beneath that sign.  When Trump Tower opened, it gave the city a superb new riverwalk, featured truly outstanding and unique landscaping by Hoerr Schaudt featuring plants native to our area.  Little more than a year later, Trump ripped it all out for a cheap generic replacement featured large swatches of rocks.

Want more?  Go down two levels and look at all the Trump Riverwalk's storefronts.  None of them have ever had a tenant, nor, does it appear, are they likely to anytime in the future.  In 2012, Trump told Alby Gallun of Crain's Chicago Business that he basically intended to keep everything empty until the kind of upscale retailers who could meet his rent fell into his lap. “I'm in no rush,” he proclaimed, and now, two years later, nothing has changed.  While the Wrigley Building plaza has undergone a stunning restoration that has made it a magnet for new retail, Trump's stores remain empty.  Trump seems willfully blind that his Riverwalk's primary users are not the Portofino crowd he imagines, but normal people like you and me boarding a water taxi or tour boat.  God forbid we have a place where we could sip a cappuccino on the terrace or get a (gasp!) ice cream. 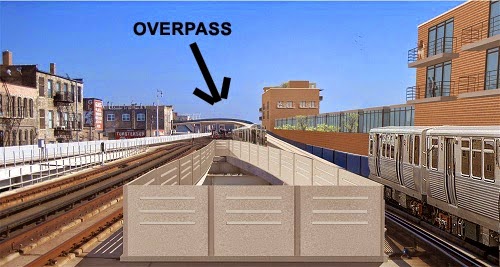 Rahm and Forrest Claypool are pleased as punch that we're exhausting ourselves in a frenzy of disapproval over Trump's sign, so we won't notice how they're about to decimate the Lakeview neighborhood around the Belmont ‘L’ stop with a wide-swatch demolition of buildings for an ill-conceived roller-coast overpass.  Could we slice off just a bit of the Trump outrage for this? 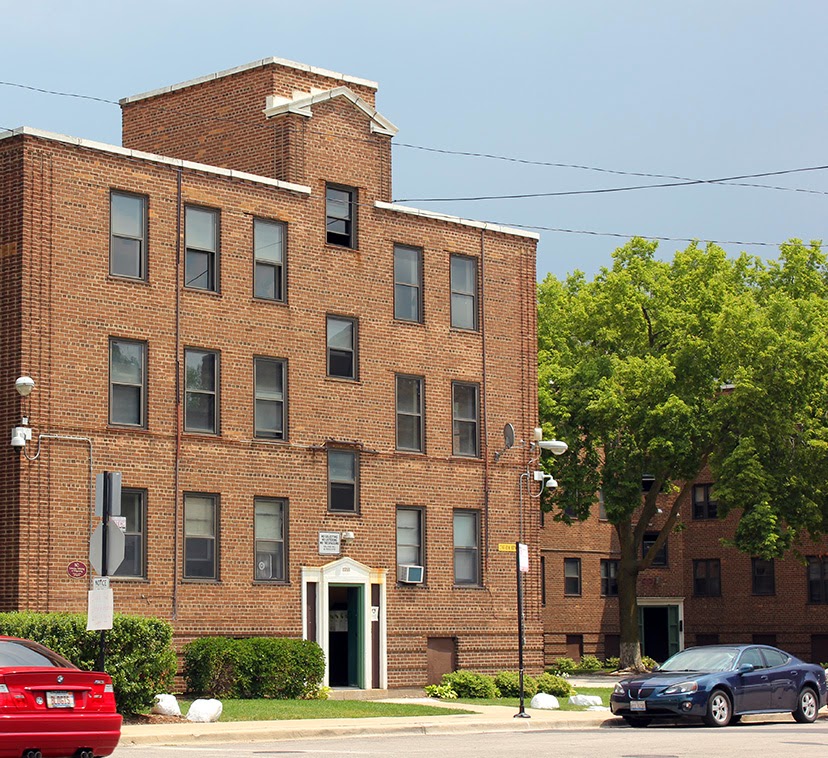 This week's Chicago Reader has a great report by Maya Dukmasova on how the CHA is pushing redevelopment of the landmark-quality Lathrop Homes to push out the poor and make the area safe for affluent developers.  I wrote about it two years ago, and nothing has changed.  If not actual outage, could we at least peel off a modicum of interest amidst our all-consuming obsession with really big letters?

Then there's the way that Rahm, facing potentially bankrupting pension costs, is assiduously emptying out Chicago's TIF accounts for things like sports stadiums, city-owned hotels, and still another $60 million selective-enrollment high school to make sure not a penny is left to help us out on the city's financial crisis.   A little outrage might be in order here, but you can be sure Rahm is more than happy if we prefer, instead, to be watching him and the Donald slug it out. 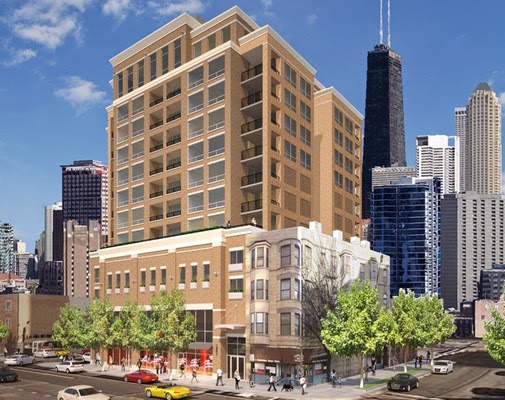 Or how about the fact that Chicago is on the cusp of a new residential tower construction boom that's awash in architectural mediocrity, with not a single one of the buildings looking to add anything to Chicago's global reputation.  Couldn't we get mad about that?  Just a little?

I'd write more, but I have to stop to check out Facebook and Twitter for the latest on the Trump brouhaha.  I suppose I should be outraged, but mostly it just leaves me a little sad.

You're the first critic I've seen to call contemporary Chicago architecture mediocre. I've been saying that Chi has fallen behind NYC and other cities for a while but all people want to talk about is Aqua.

New York City:
•Rafael Viñoly's 432 Park Avenue is
monstrously out of scale.
•Christian de Portzamparc's One57 is
ugly and cheap looking.
•Jean Nouvel's Tower Verre is the
anorexic version of Chicago's Hancock.
These three examples are the reason people want to talk about "Aqua."
Grass is always greener on the other side.

I don't worry about it. The sign is as temporary as the flesh on the man himself. Someday he will be gone and the building will come into someone else's possession. They will remove the lettering and many Chicago bloggers will share their joy in it's removal.

Getting upset over the sign is exactly what this guy wants. As long as we're talking about him - good or bad - he's satisfied.