It's only a week ago that the news broke that Chicago has been chosen by film-maker George Lucas as the winning location for his $400 million Lucas Museum of of Narrative Art.  We'll be weighing in on the topic over the next few days, but we already have a press release announcing the winner of an unofficial George Lucas Museum Design Contest, sponsored by VIATechnik, a Chicago-based firm offering “estimating, LEED Coordination and BIM modeling services to Engineers, General Contractors, and Developers.”
First place went to recent IIT School of Architecture grad Mircea Eni, currently interning at Krueck+Sexton for the summer.  Eni's proposal circumvents the growing controversy over placing the museum on a lakefront site by lifting up the entire building above the landscape.  According to Jury member Mike Ellch of Related Midwest, as the site is on “a museum campus meant to be enjoyed by everybody” the winning design “has a park that is accessible to everyone, and this is very important to this design, that's why we liked it."  Architect Carol Ross Barney, another juror, referred to the winning design as “taking you to this almost dreamlike level as a great story is being told.  There is this idea of being lifted up, and the illusion it creates is quite nice.”

Filling out the jury was Daniel Peddicord of Pepper Construction and Brian McElhatten of Arup Chicago.  CEO Danielle Dy Buncio said that VIATechnik launched the competition about a month ago, after Lucas made known his interest in Chicago as a potential home to his project.  “We wanted to host an unofficial contest where aspiring designers and architects could showcase their talents and passion for the Star Wars Franchise and its maker George Lucas, while helping Chicago become a destination for what will assuredly be an iconic Museum.”

Second Place recognition went to Andrew Issac Ng and Laura Kiyokane, both recent grads of the University of Michigan's Taubman College of Architecture and Urban Planning . . . 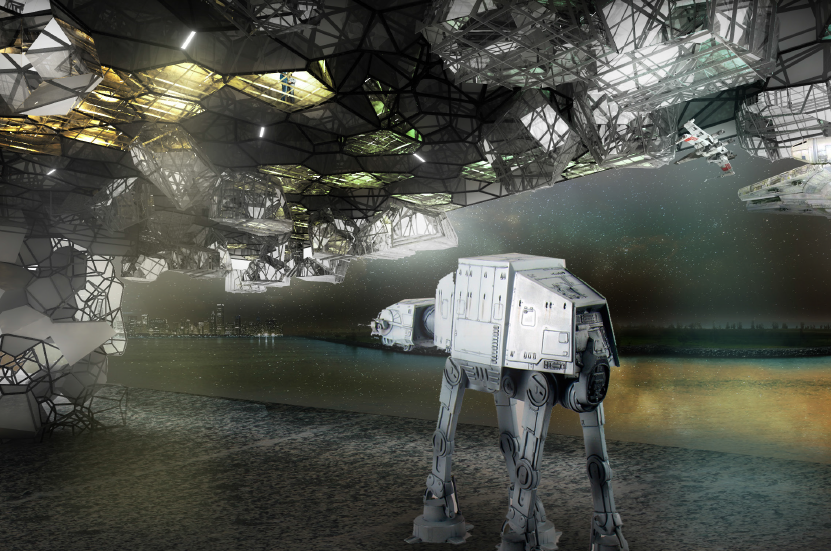 . . . with a honorable mention to marketing manager Rodney Marmilic and architect Eddy Stambulic, the Australian duo collectively know as the Womp Rats . . .

Did the Michigan Taubman team really just propose a picture from the movie?

I sense a great disturbance in the force.

More training Mircea needs. Much
Mircea has to learn.

Here's a thought: rather than making the Lucas Museum visually compete with (let alone be compared with) the Museum Campus, how about creating a Museum Campus II on the old Michael Reese site, and plop down the new Chicago children's Museum that wanted to invade Grant Park a few years ago? Thematically, at least they'd go together (do we really think there'll be much for grown-ups at the Lucas?).

With one museum at one end of the site and the other at the other, there would be more than enough room in between to create new green space -- a nice park with playgrounds, a skateboarding course, a rest area, maybe a combination ice rink and water feature that kids can wade in, parking for food trucks, gently curving roads and dedicated bike paths, MANY trees and nice landscaping, and plenty of parking (underground). That Reese site is ugly as sin right now and going to waste. Put the Lucas there, provide some amenities for the neighborhood, and stick the kiddie museum in there, too. Works for me! Read further here: http://bit.ly/1pRjdPS