In 1888, wealthy widow Harriet F. Rees had architects Cobb and Frost build her a mansion on Prairie Avenue, Chicago's "Millionaire's Row".  She lived in it for only four years before her death, so she didn't get to see her posh neighborhood abandoned by Chicago's 1% for Potter Palmer's new Gold Coast along the lakefront four miles to the north.  She didn't see what was once the city's most desirable neighborhood transformed into a raw manufacturing and industrial district.   By the time the house was designated an official City of Chicago landmark in 2012, it was a lonely presence amidst the lofts and scrap yards around it. 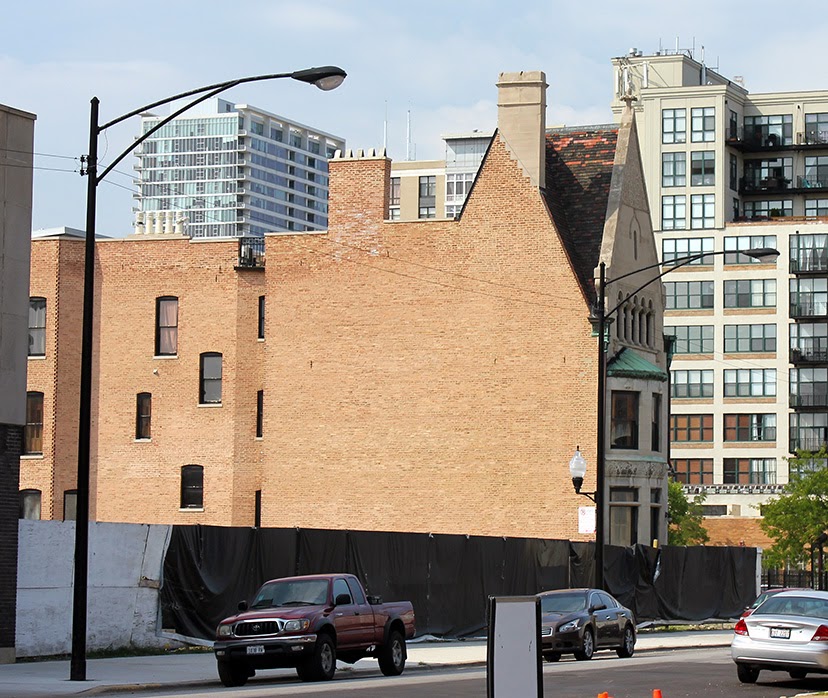 It was also in the way of one of Mayor Rahm Emanuel's most favored, if questionable, projects: a new sports stadium for DePaul University.  And so it had to go.  If this was the project of one of the city's clouted real estate developers, the Rees house would already be rubble.  Fortunately, it fell under the purview of two of Chicago's greatest money laundering systems - the TIF program and McPier - which are staggeringly adept at transforming general tax revenues and fees due the city into free-spending private mega-projects with massive fat contracts for all the usual suspects.

On Saturday, the Harriet F. Rees house sat in anticipation at a rotated angle to its original siting.  And if you're around 21st and Prairie on Tuesday (or Wednesday - reports vary) you can watch the spectacle of the 762-ton house being moved to a vacant lot a block and a half to the north.  According to an excellent report by Dahleen Glanton in today's Chicago Tribune, the house now sits on 29 remote-controlled hydraulic dollies with 232 wheels. Steel beams enwrap the building to keep it from falling off.  A pathway of nine-inch stone has been placed atop the asphalt roadway to facilitate the move. The home's 200-ton coach house was already moved last month. 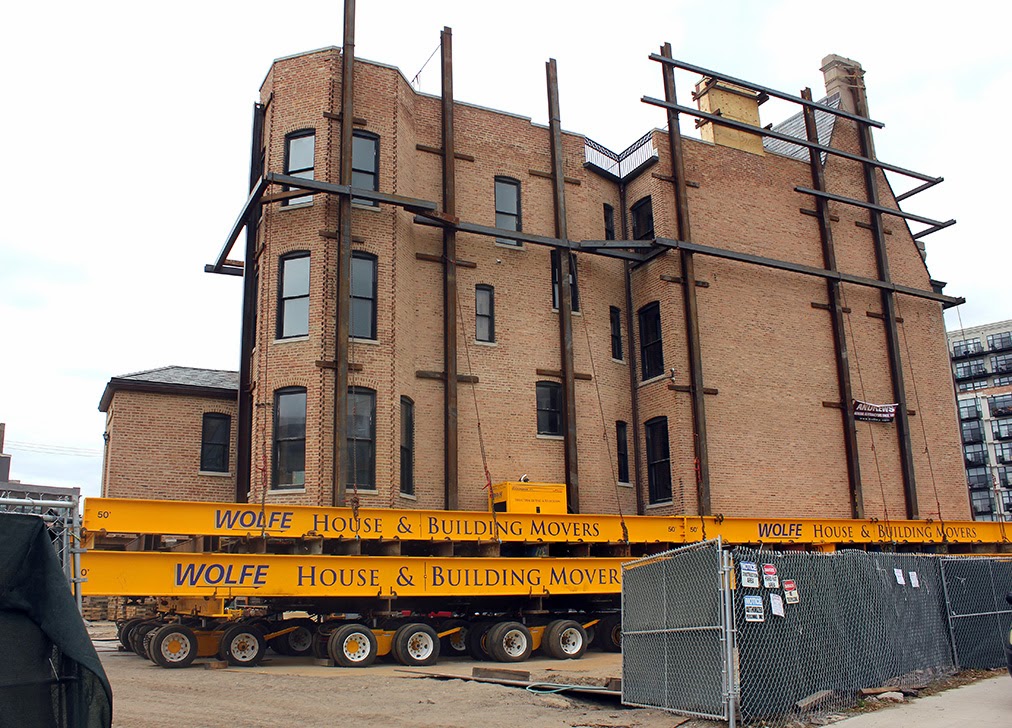 Bulley and Andrews was hired by McPier for the project, with engineering firm Thornton Tomasetti also playing a major role. 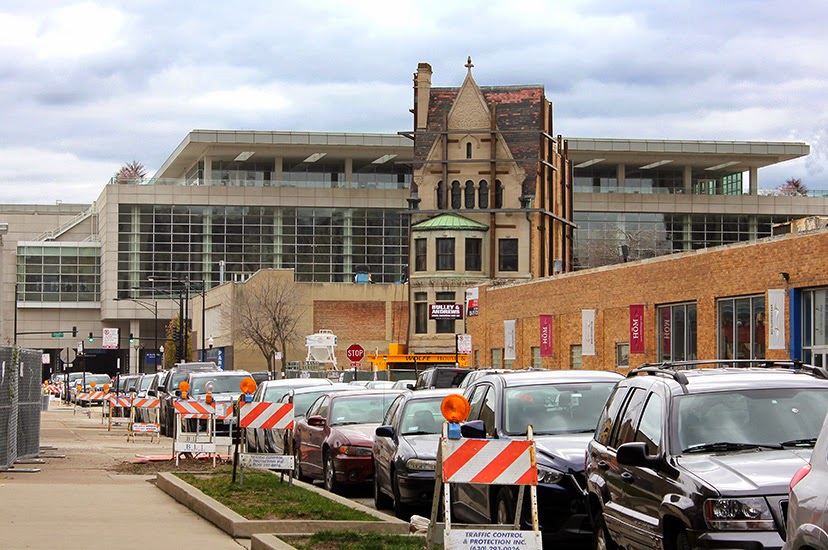 A Chicago landmark saved rather than demolished - it's a great success story.  So why do I have this nagging pain  in the pit of my stomach?  As with pretty much everything McPier is involved with, the Rees house move is a massive money pit.  According to Glanton, the move is costing $6 million.  The plot it's being move to cost $1.9 million.  And the house's current owners are being paid $450,000 in compensation for their substantial inconvenience.     That's right, dear taxpayers - we are paying over $8 million to move a house that we don't even wind up owning.

The Harriet F. Rees house is worthy of its landmark designation, but it is not in the same league as the Louis Sullivan/Frank Lloyd Wright designed 1891 Charnley-Persky house, now home to the Society of Architectural Historians.  Charnley-Persky suffered major damage earlier this year from a burst sewer pipe, and it's been putting together a successful campaign to fund the needed repairs. $5,000 from the Driehaus Foundation,  Another 5,000 from Alphawood.  A $10,000 challenge grant from Cynthia and Been Weese.  So far, $36,000 has been raised.   You can donate online here. 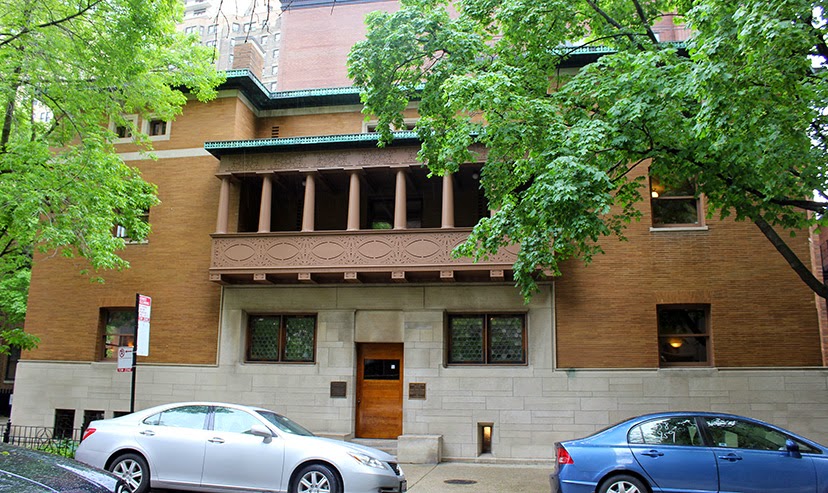 The Harriet Rees house is a middle-grade landmark by a prominent Chicago architectural firm.  Charnley-Persky is a masterpiece by two of the most important architects in the history of design.  It just doesn't have a sugar daddy like McPier.  In Chicago, even when it comes to preserving our priceless architectural legacy, it's still not what you are, but who you know.

Despite its continuing pretensions of being a global player in the art of architecture, Chicago remains, in many ways, a provincial cow town.  In this post, I've discussed how that plays out in the architecture of our past.  Later this week, I hope to be writing about the Lucas Museum, and how it plays out into our future.

Well, I guess the Landmarks Staff meant it when they said " money is not a concern of ours"

They obviously meant it.

Huge amounts of money have dropped from the sky for the restoration, and even recreation of some of Wright's great works. Many of these were regarded as lost causes 25 or 30 years ago. The Darwin Martin house has raised or will raise $45M, the Westcott House was a heap of rotting wood, crumbling plaster, structurally precarious and utterly beyond hope...yet it has been fully restored. There are now so many owned by non-profits or private owners that have been or are being lavishly restored it's hard to believe. Then the David Wright house saved by the largess of an unknown donor at the last minute.

Are the big contributors to the cause of Wright and Sullivan tapped out? Surely the Charnley House needs nothing like $8 million to undo the recent damage. Isn't the Charnley House, despite this damage, a great work already firmly in the "saved" category? Does the lack of imminent destruction fail to inspire donors?

What part of the story have I missed?