In the late 1970's, with Mies van der Rohe dead for nearly a decade and so-called "Miesian" architecture at its greatest point of power, architect Stanley Tigerman declared war with a single photo montage . . .
"Two of us," Tigerman recalled last Thursday at the Chicago Architecture Foundation,  "James Ingo Freed and I, were sitting one night in my office, drinking. And I made this collage.  And he gave me the backbone to do it. I really was a bit of a coward. I didn't want to do it , but it was definitely confrontational. I was an incredible admirer of Mies van der Rohe, but I always had problems with the sycophants, the acolytes after Mies's death, who ran the school into the ground. Because they didn't add to the syntax of language in the way that they should have done." 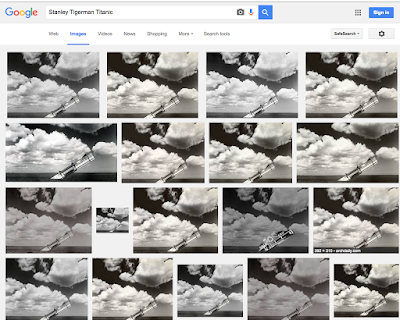 Since then, Tigerman's image has itself become iconic, a key symbol of the rise of post-modernism and the emergence of a new generation of architects with very different ways of thinking. Nearly 40 years later, with Chicago's first Architecture Biennial launched with full force, architect and designer Elva Rubio thought it might be time for an update.
"Elva persuaded me to do another one now," said Tigerman.  Last week's event, held around a table imprinted with the original Titanic image, included the unveiling of Tigerman's 2015 update, the architect in conversation with both Rubio and a panel of clients, and a display of office artifacts. 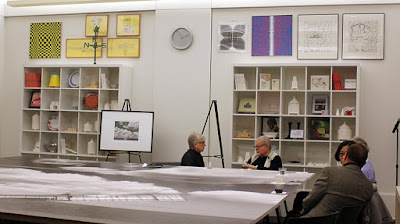 "If you look at the wall," explained Rubio, "basically this is Stanley's office here, that you allowed us to kind of pull out and bring to the public which is absolutely amazing, kind of a patchwork of their lives, he and Margaret, and all the different accomplishments.  You can see the range is astonishing. It's writing, it's product design, ideation, architecture, urbanism, so it's quite a prize . And it's a very small piece of what is there." 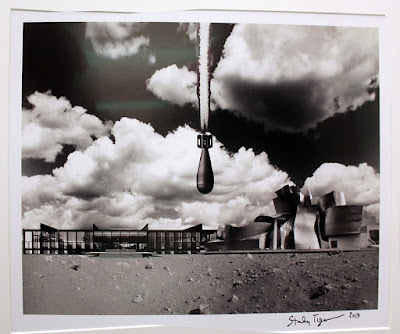 Tigerman had talked repeatedly about the struggle inherent in one generation taking over from the previous.  He recalled his last evening as Co-Director of Archeworks, the alternative design school he had founded in 1994 with Eva Maddox, at an event that had been named "Passing the Baton". He strode to the podium with a briefcase, from which first pulled a conductor's baton.  That is not what he meant, he said.  Then he pulled out the kind of baton marathon runner's pass one to the next.  That is not what he meant.  Finally, he pulled out a large hunting knife.  That is what he meant, he said, just before he striding out of the building never to return.

Of course, the violence that Tigerman referred to repeatedly is less a matter of tearing flesh than an Age of Innocence kind of genteel evisceration.  Indeed, even the imagery of Titanic 2015 - a bomb falling from the sky about to obliterate both Mies's Crown Hall and Frank Gehry's Bilbao museum should be seen as a kind of a McGuffin spurring discussion about succession. 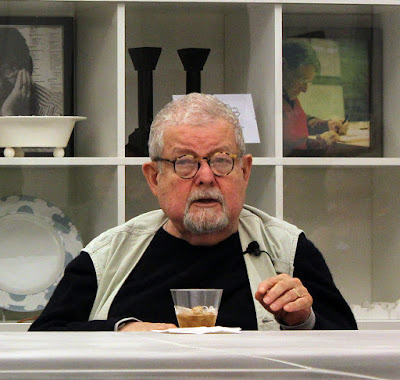 "I thought about an icon," said Tigerman, "and the problem with an icon is it becomes iconic. It's emulated, and thereby watered down . . . The problem with an icon is that people are so overwhelmed by it that they then use it as a referent to then do something . As opposed to having a tabula rasa, a clean sweep. Nothing on your drawing board. You start again anew each time."

"There are originals, and there are copies. So I have a problem with an icon. I mean, I love Frank Gehry and I certainly love Mies van der Rohe. Obviously, Bilbao has become iconic. And it's not about signature work.  Not about Frank replicating or redoing something in a similar certain way. It's about something becoming an icon. Something becomes so staggeringly important that it inhibits one from finding one's own series of icons. So that's what this is about. It's got nothing to do with bombing Crown Hall or Bilbao at all."

"It's the problem of using those referents as inspiration. Inspiration is there in the emptiness of your drawing board or your computer . . . You try to do something each time out of the barn that's new. Not to be different. But just to try your hand at it. Inevitably, there will be things on your mind. Architects always have agendas. Architects are not simply, as Frank Lloyd Wright referred to himself as Louis Sullivan's pencil. They're not the client's pencil. The client comes to you because they're hoping that you have an idea about something. And when you hold up an icon, and that becomes the referent, then the client in a way becomes diminished."

"[Mies] was not going to be held hostage to the vicissitudes of clients. He had a 20-man office. He had 20 people. He had 20 people when he died. And he didn't expand it to 21, or drop it to 19. That was his team. And he wasn't going to have somebody come in and say, oh, we're going to overturn everything to accommodate them."
"Mies was a role model for me. Why do you think I've lived in a Mies building for 45 years? Because he was a really terrific architect. And it was a challenge to me to wake up every morning in a really good building . They're going to drag me out horizontally. That's where I'm going to end my days. Because he was my role model. He was my Abraham."

"Architecture is optimistic. The forces are always there to diminish you.  Building commissioners, zoning administrator, often clients. to diminish the work of the architect . . . You have to have a very strong stomach, and a very strong backbone.  You have to be stunningly and optimistically inclined to cause something to be built."

"It takes a wonderful client to make a really good building to transpire. So it is about optimism. You have to convey that optimism to your clients and everybody in the world, who will make light of what you do. Trust me."
Tigerman had special praise for the Chicago Architecture Biennial, "which I'm thrilled by. 120 architects from all over the world, all six continents, that [Graham Foundation's] Sarah Herda and Joe Grima, the former editor of Domus, put together with the help of a consulting group that included [Chicago Architecture Foundation's] Lynn Osmond and a number of people. But they did it. And so what you see at the Cultural Center is this thrilling youngest generation , which is thrilling because they somehow have coalesced and they're not quite as back-biting as one finds in New York.
"Not all of it is wonderful. A huge proportion is quite remarkable. . . . Not everything is happy ending stuff. They get full marks, as far as I'm concerned."

The exhibitions Currencies of Architecture and Celebrating an Icon continue at the Chicago Architecture Foundation, 224 South Michigan.  Concurrent with Celebrating an Icon is a series of panel discussions which continue next Thursday, October 29th, with a Chicago Educators evening including Penelope Dean of UIC, Vedran Mimica of IIT and Ben Nicholson of SAIC; a November 12th event with Carol Ross Barney; SOM's Brian Lee on November 19, and a closing party and auction on December 4th.  More information here. 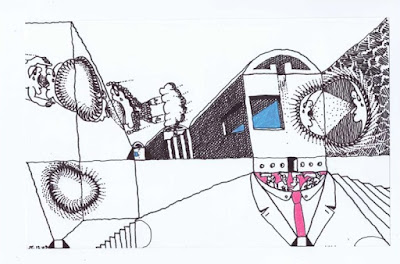 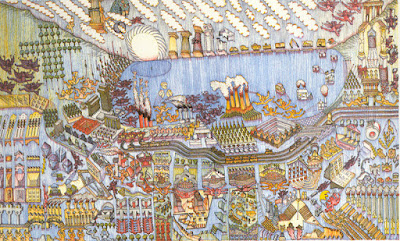 The Architect as Zelig: Tigerman's Ceci n'est pas une reverie, at the Graham 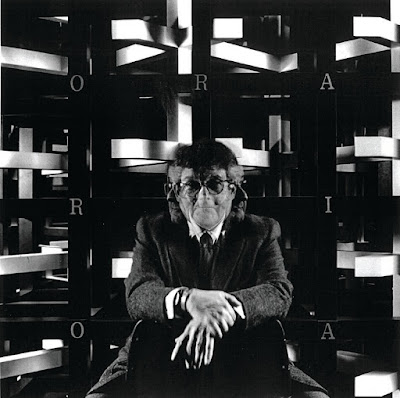 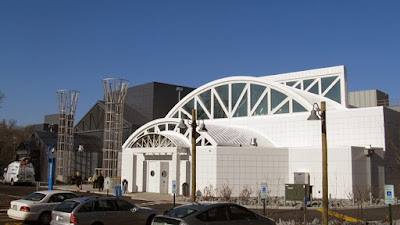 As he receives a Lifetime Achievement Award from AIA Chicago, a Stanley Tigerman Miscellany

Really interesting history here. Those images are definitely iconic nowadays. Thanks for sharing this!