Little Houses on the Lakefront: The four kiosks of the Chicago Architecture Biennial

What's an Architecture Biennial if you don't actually build stuff?  There are a number of full-up houses constructed inside the Chicago Cultural Center, but that wasn't enough.  The Chicago Architecture Biennial also seeks to colonize the Chicago lakefront with a series of four pavilions. The idea is to upgrade the poor quality of the 40+ small buildings that serve the vast numbers of people visiting Chicago's 20 miles of beaches and parks lining Lake Michigan.

As noted in a tweet from Trib Architecture critic Blair Kamin, the worst of these are fairly wretched . . .

While, in truth, a large number of others are not without their charm. 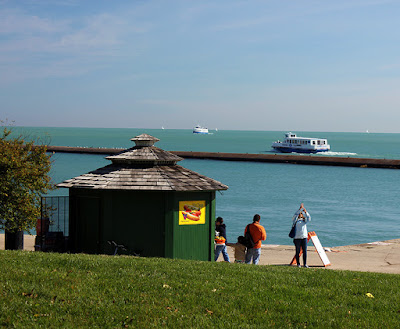 For the Biennial, however, none of the four kiosks are in their ultimate intended locations.  That's supposed to come next summer.  None of them are in or near the Cultural Center, either.

The farthest flung is at IIT, one of three schools that partnered with the Biennial, the Park District, and the City of Chicago in creating kiosks.  Call the Cent Pavilion, it's the work of Chilean firm Pezo von Ellrichshausen, the first winner of the Mies Crown Hall Americas Prize for Emerging Architecture (MCHAP), created by IIT Dean of Architecture Wiel Arets. The Cent Pavilion is described as . . . 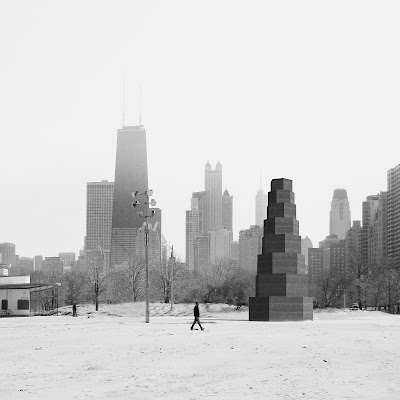 . . . a 40-foot tower meant to convey silent and convoluted simplicity. It repeats the same angled design over and over, resulting in an opaque monolith. When its commercial function ceases at the summer’s end, the kiosk will complement the verticality of Chicago’s iconic skyline year-round.

At IIT, however, the tower is confined to its structure, sitting in front of Mies van der Rohe's iconic Crown Hall . . . 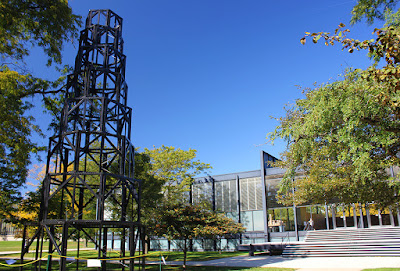 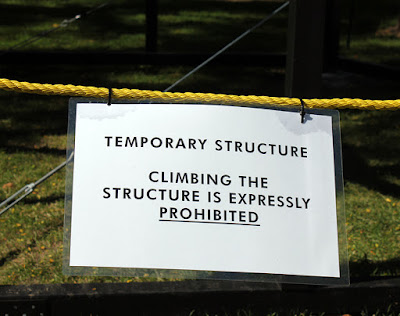 Instead of the ultimate stack of hat boxes, in this context it almost seems like an homage to the nearby smokestack of IIT's power plant . . . 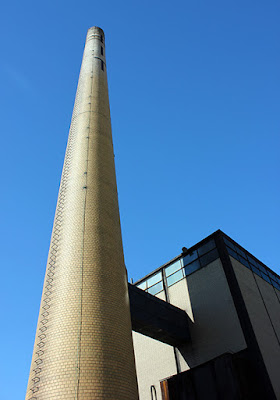 The other two school-partnership kiosks are much closer to the Cultural Center.  Across the street, in fact, in Millennium Park, just off to the crowds taking in Anish Kapoor's Cloud Gate Sculpture.  Summer Vault, a partnership between UIC,  Paul Andersen of Independent Architecture and Paul Preissner of Paul Preissner Architects offer up the kiosk that's the closest match to the original concept. 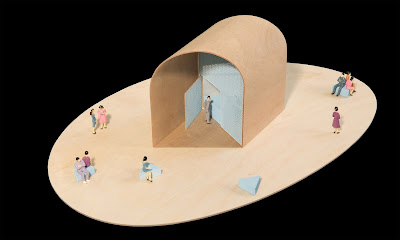 . . .basic geometric shapes—a 12-foot-diameter barrel vault, a parallelogram, triangles—combined to create a curious, freestanding hangout within the park. The interior of the skewed vault is divided into two triangular spaces—one enclosed by expanded metal screens and doors, and one open to the air but still within the vaulting. This two-part plan allows for commerce and community to occur simultaneously. It also reflects the kiosk’s Persian origins as a 13th-century garden pavilion, while embracing its contemporary use as a seasonal commercial front and festive park retreat. Its openness allows year-round use, so that it remains active even in its retail slumber during the Chicago winter. 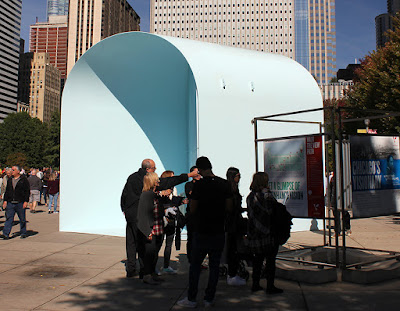 Interestingly enough, the built kiosk is currently the one closest to its original concept, and also the one the public has the most problem getting its hands around. 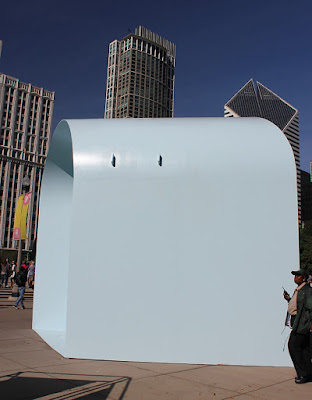 . . . possibly because there's no real activity in the kiosk right now, and because the metal screens that subdivided the kiosk seem a bit too fence-like. 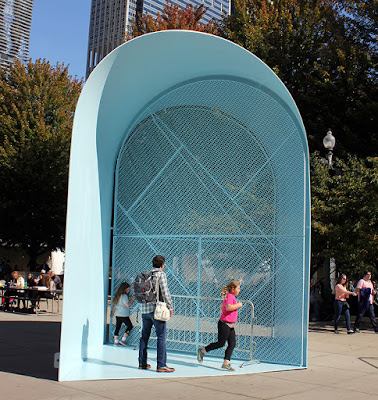 Kids, however, seemed to have no problem in being drawn to exploring it.

In contrast, Summer Vault's neighbor, Rock, by Kunlé Adeyemi in partnership with The School of the Art Institute of Chicago is the least completed kiosk - an isolated series of fragments - and the most popular.   Ultimately, it's supposed to be a Fallingwater-styled construction cantilevered over Montrose beach . . . 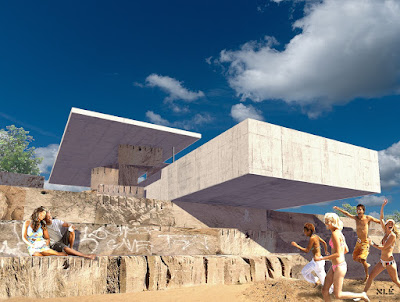 For the Biennial, however, it's a collection of rocks of the type of rocks that have historically been Chicago's seawall against Lake Michigan, until the Army Corps of Engineers get holds of it and makes it all a smooth expressway. 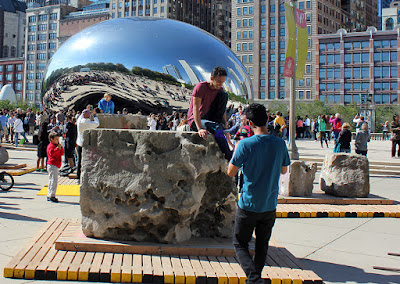 Some of the rocks include spots of color from the unofficial paintings and graffiti that come when people use the rocks as a canvass.

At Millennium, what seems to have made the rocks hugely popular are their picture-taking potential, perfect for everything from selfies to family portraits. 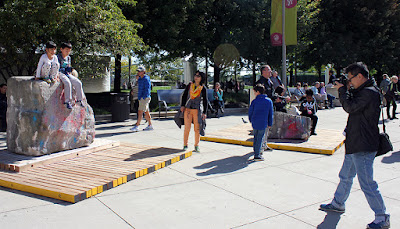 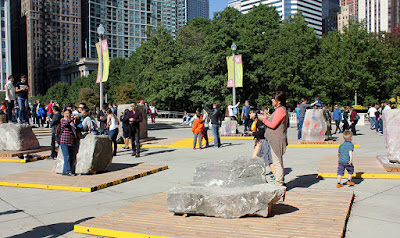 The design of the last kiosk is the result of an international competition with a $75,000 first prize.  You can see the runner-ups here, and other entrants here. 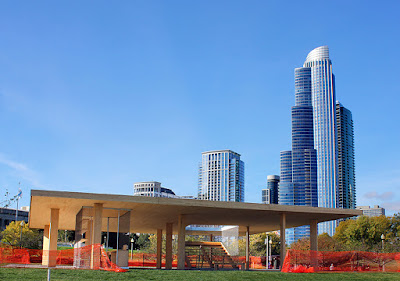 . . .  is a quest to build the largest flat wood roof possible within a limited budget. Using Cross-Laminated Timber, a new carbon-negative engineered lumber product, in the largest dimensions commercially available, the kiosk aims to provide an excess of public space for the Architecture Biennial and Chicago beachgoers. 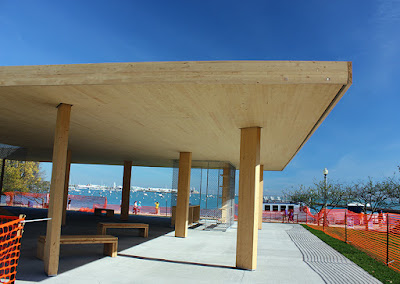 This weekend, the plain wood and simple lines of kiosk, located on the Museum Campus just south of the Field Museum, was in competition with a cordon of orange plastic mesh, presumably there to protect from the hordes running and viewing Sunday's Chicago Marathon. 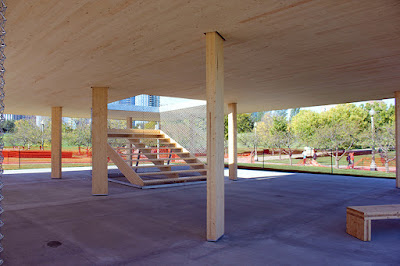 The 56-foot square structure currently is a bit surreal, with a set of stairs going nowhere.  Other renderings show visitors using the stairs to access the kiosk's hovering wood roof slab. 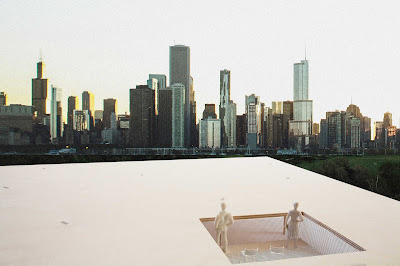 From the viewing platform, the roof becomes a new artificial horizon, shutting out the foreground and emphasizing the vertical Chicago skyline above an abstract floating plane. 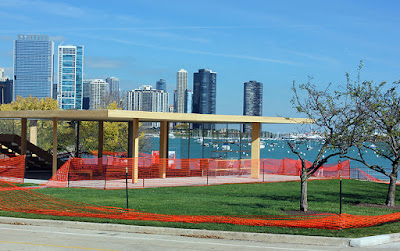 The kiosks are scheduled to be on display through the close of the Biennial in early January. 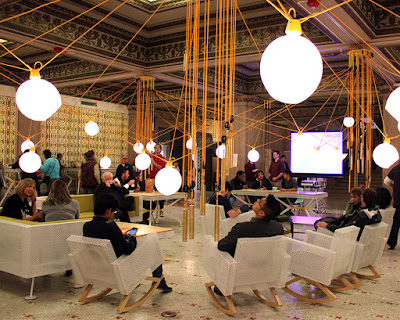 Carnival of Possibilities: A Photographic Tour of the Chicago Architecture Biennial