Just months ago, the Fulton Street Market district was declared an official Chicago architectural landmark, protecting contributing structures spread out on over two dozen city blocks.  Above is the front of one of the newly protected buildings. 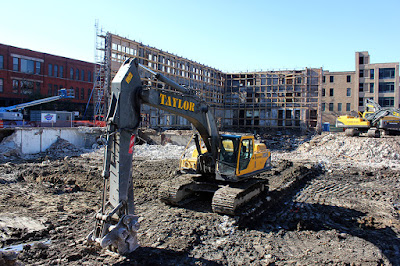 And this is what's behind.  Could there be any more accurate symbol of the current transitioning of one of Chicago's most historic districts? 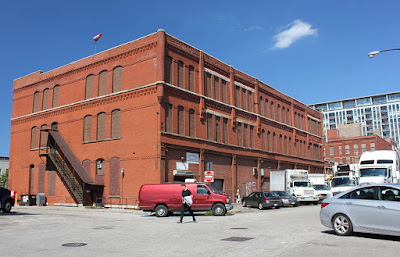 This was one of what could be argued to be the two most important buildings in the district, each facing the other down a 252-foot length of the 800 block of west Fulton Street.  In some ways, they were the real beginning of the district.  They were constructed in 1887 by the Fulton Street Wholesale Market Company, a co-operative of 22 small meatpacking firms. 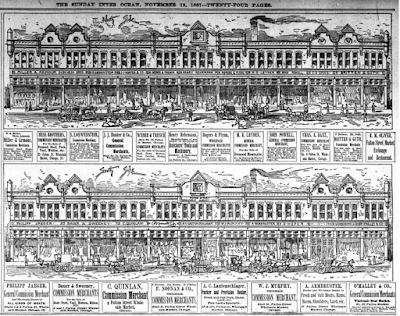 Architect William Strippelman designed them in the Romanesque Revival style he had studied at the University of Marburg, before he emigrated from Germany to the United States to serve as a draftsman in the Union army.  In 1868, he settled in Chicago, where he would spend the balance of his life and career. 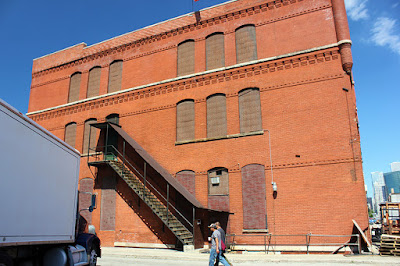 As recounted in the Landmark Commission's indispensable history of the district in the official Landmark Designation Report, Strippelman added a third story to both buildings in 1903.  By then, they housed not just the independents, but the branches offices of of "Philip Armour, Gustavus Swift, and Nelson Morris, the nation's 'big three' packer and global brand names in the early twentieth century,"

A mid-1960's fire consumed a large chunk of the twin on the north side of the street, with the damaged section replaced by a featureless two-story structure listed as "non-contributing" in the designation ordinance. 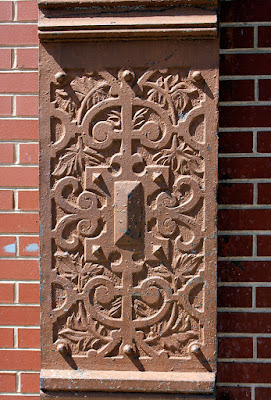 Fulton Market continued to be a going concern for over a century and a quarter, even as the centrifugal force of the Loop dissolved under the dual crushing forces of white flight and suburban sprawl, with neighborhoods immediately adjacent to the west and south spending the 60's and 70's becoming "problematic."  In the 21st century however, the central city is again compacting.  While troubled outlying neighborhoods like Englewood continue to depopulate, a massive gentrification continues in and around the Loop.  The near west and near south sides are headlong into the process of being re-secured as safe, upper middle-class territory. 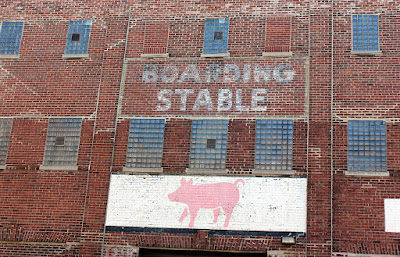 With nearby west Randolph Street transforming into an avenue of upscale restaurants, Fulton Market's comparably cheap land and rents made it a magnet for galleries, shops and still more restaurants.  Initially, the new imports and the meatpackers and poultry, fish, eggs and butter merchants lived in an uneasy equilibrium.
Then the dam broke.  The owners of the massive, 12-story tall Fulton Market Cold Storage building, the district's visual marker since the 1920's, sold out to developer Sterling Bay, which begin stripping the structure's facade to create a massive new office building where Google is consolidating over 500 Chicago workers currently dispersed among multiple locations.  Fulton Market is now a hotbed of development activity.  Hotels and club and residential developments join the mix of newcomers. 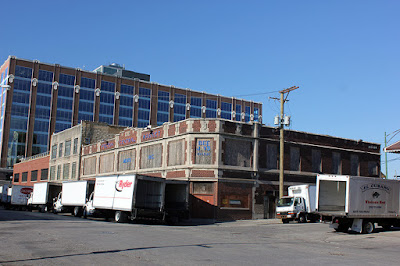 When many Fulton Market businesses fought the creation of the landmark district, they cited the added costs of complying with its provisions when they needed to modify their buildings, but left largely unsaid was the elephant on the forklift:  everyone could see big money was coming into Fulton Market.  Not unreasonably, they wanted their fare share when it came time to move on. 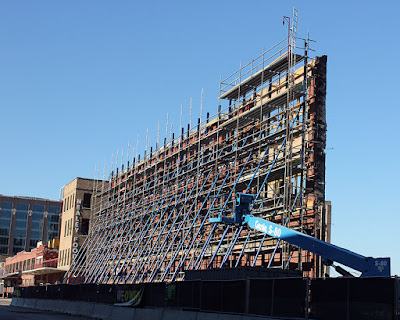 That time is now.  It was a shock to come upon the 1887 North Fulton Street building this past Sunday and see it demolished down to a taxidermy remnant.  A shock, but not a surprise.  Although actual meatpackers may be a vanishing presence, developers, in the words of the late deal-maker/shoebox collector Paul Powell, can "smell the meat a'cookin."  Money is the river that levels all obstacles in its path. 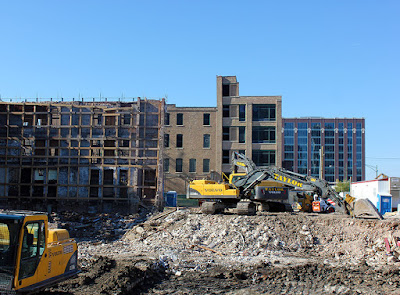 Behind that forlorn Fulton Street facadectomy is both a $20 million, 60,000-square-foot project and the story of the origins of money and power in the early 21st century.  The project is the Chicago outpost of Brooklyn Bowl, which began in 2009 inside a former 1880's ironworks foundry in the borough's Williamsburg neighborhood.  Claiming to be a the world's first LEED-certified bowling alley, the complex also includes a bar and a music venue that attracts such top acts as The Roots and Elvis Costello.  After branching out first to London and Las Vegas, Chicago is the next link in their chain.

The story of money and power is that of local powerhouse Don Wilson, who began as a eurodollar options trader at the Chicago Mercantile exchange, and within seven years built up his own firm, DRW Holdings LLC, into a company with 500 employees.  Becoming fabulously wealth, he  branched off into real estate, with impressive results.  In January of this year he sold for $14.1 million a building at 1003 North Rush that he had bought for $12.4 two years before.  In February, DRW sold the former 1938 Esquire Theater, which it had gutted and transformed into a high-end retail building, for $176 million.  DRW had bought the property in 2010 from the Anglo Irish Bank, which had acquired it by foreclosing on a $33.2 million loan. 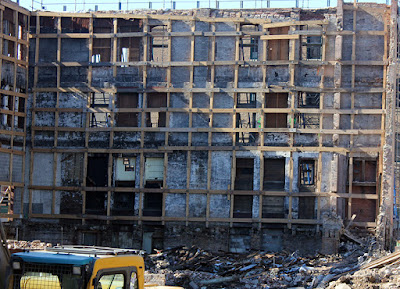 Originally the Fulton Market project had included a 17-story, 200 room hotel, but now Brooklyn Bowl is the primary tenant, fitting its 24 lanes and 600-person concert stage into a three-story structure designed by local firm OKW Architects that will also feature 18,000 square feet of retail.

In Williamsburg, Brooklyn Bowl kept what seems to have been a fairly unremarkable foundry building and gutted it for their build-out, drawing heavily on recycled materials.  In Chicago, DRW has traded off demolishing a newly designated landmark building by agreeing to keep its facade.  Undoubtedly, that process is not inexpensive, but it's pretty clear it's looked on as little more than a sop to landmarks in order to get the desired tabula rasa on the remainder of the site.  In the only rendering for the new building I've been able to find, the historic facade is basically an afterthought, shunted off to the side in favor of an emphasis on the cheerful mediocrity of the new building's faux industrial facades.
Within two years, I would expect that nearly all of the businesses that gave Fulton Market District life for over a century and a quarter will have relocated.  Corfu Foods is now in Bensenville, Fulton Market Cold Storage relocated as Hasak Cold Storage in Lyons.  Barring an economic crash halting development in its tracks, the neighborhood will become one of the most vibrant in the city, but the "market" in Fulton Market will be long departed, gone the way of Cap Streeter's steamboat, a visceral reality reduced to the abstraction of a branding device.  The lovely restaurants will remain and multiple, the sourcing of the food they serve now another abstraction, the physical reality of the process banished safely out of sight.

Like a blue-legged centipede, the supports of the salvaged facade put Fulton Street's last survivors on notice: the tentacles of a very hungry progress will soon be reaching their way. 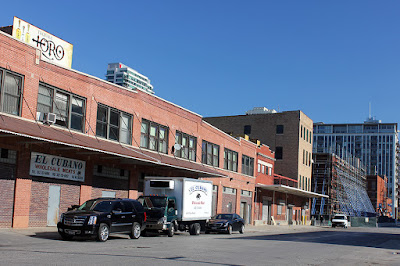 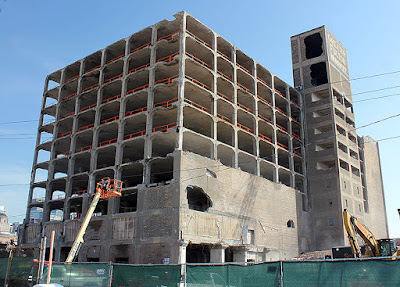 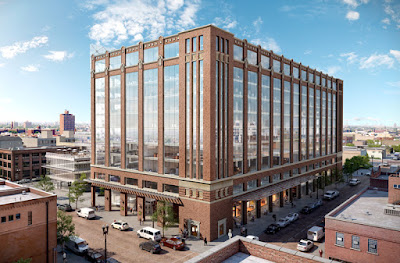 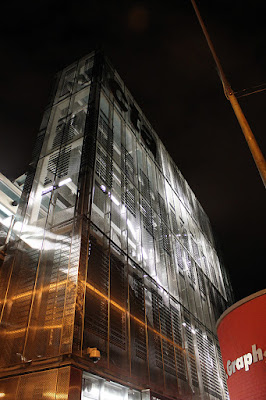 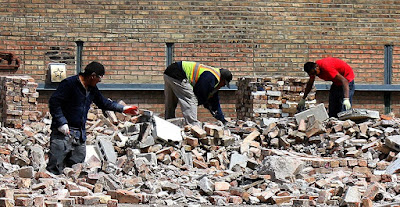 Very interesting photos here. Can't wait to see more of this as things come along. I am really liking the color of that brick actually.

I've been working in the West Loop since last winter, and even in that short time there's already been so much change. I take a long walk every afternoon, taking photographs, and I'm glad to have shot photos of this building and the separate packing plant behind it (now also demolished) while I still could. I find it curious that this building is getting a facadectomy, while its twin across the street was presumably structurally sound enough to be fully restored. The landmark ordinance seems pretty irrelevant if it allows one of the most historic buildings in the district to be torn down to just its facade. And the Fulton Market Cold Storage building, for all of the ballyhoo over its redevelopment, has been rendered beyond recognition - surprising, given how well Sterling Bay treats most of its vintage properties.

Change in any neighborhood is inevitable, especially one this close to the Loop, but the city is in real danger of losing one its most unique areas unless it forces a slowdown to the redevelopment mania.