Late Thursday evening, Chicago Tribune architecture critic Blair Kamin released five renderings presented to the Chicago Department of Planning and Development for the long-rumored new Apple Store in Chicago's Pioneer Court along the north bank of the Chicago River just east of Michigan Avenue.
Apart from a bravura free-standing glass staircase, the original Chicago store, opened in 2003 at the start of Apple's retail juggernaut several blocks to the north,  placed more emphasis on sustainability than spectacle.   The proposed new 20,000 square foot store, in contrast, would be more in line with the company's current vogue for epic architectural expressions.  According to Kamin's report, it was designed by the world-renowned firm of Foster + Partners.  It  would have a 6,500 square foot footprint, and redefine the relationship of the plaza to the river. 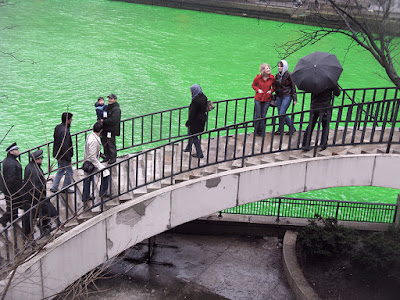 Currently, that link consists solely of a elegantly curved but constricted winding staircase.  In Foster's design, it's replaced by wide Spanish steps more in the line with the larger staircases found along the newer portions of the riverwalk to the east.  The huge roof over the glass-walled structure would cantilever in all directions but, perhaps most importantly, would stretch beyond the edge of the plaza to shelter the river walkway below.  In the renderings it has the appearance of wood, but would actually be reinforced with carbon fibre. 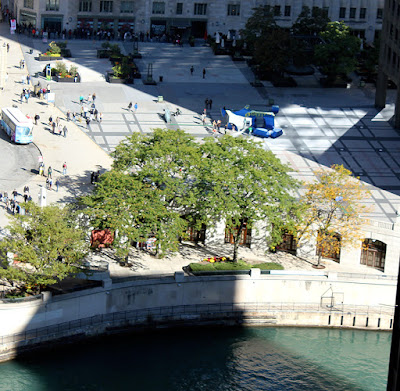 Pioneer Court's current rather anonymous riveredge would be replaced by a calling card 32-foot curtain wall, horizontally segmented between a 14-foot section above plaza level, and an 18 foot section beneath.  From the riverside view, it reads as a cutaway section of a one-story structure and its capacious basement.
Strangely enough, the new store would be something of a return journey for Pioneer Court, constructed in the 1960's.  The site is said to have once held the residence of early settler Jean Baptiste Pointe Du Sable in the 1770's, and later the larger riverfront factory of the Jap Soap Company, which stretched north also to the doors of Tribune Tower and turned out 50,000 tons of soap each year.
After an interim period as a surface parking lot, Pioneer Court was constructed in 1965 to link Skidmore Owings and Merrill's new Equitable Building to Michigan Avenue.   A cleaner version of the Apple proposal, a large Miesian entrance pavilion was part of the original design, bringing people down into the retail arcade beneath the plaza.
Pioneer Court was redesigned in 1992, removing both the entrance pavilion and the fountain, inscribed with the names of 25 Chicago Pioneers that gave the plaza its name.

By being placed along the southern edge rather than centered on the plaza, the Apple Store, even as it strengthens the relationship to the river, unbalances the geometry of the plaza.  The plus side is that there would still be a large open area to the north of the store, which could continue to be home to such spectacular, if controversial installations as J Seward's Johnson God Bless America, a supersized version of Grant Wood's American Gothic . . . 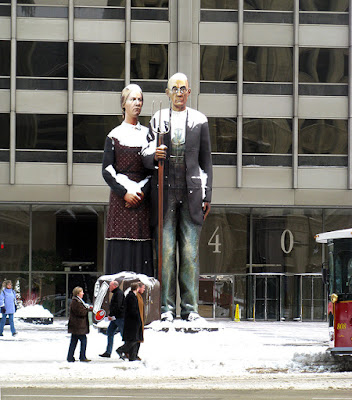 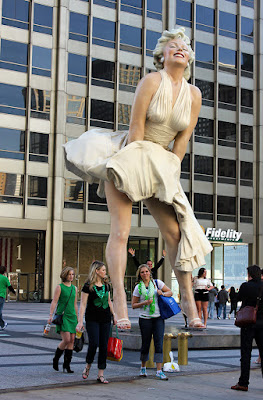 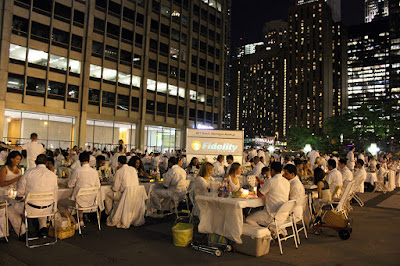 It would be good to get a better idea of what the inside of Foster's design will look like - there are no interior views among the five renderings accompanying Kamin's story - but from what we can see now, the Apple Store at Pioneer Court looks to be a pretty good deal both for the plaza and for creating a stronger, more generous civic linkage to the river at the beginning point of the Mag Mile.
More:

A Short History of Pioneer Court, its Shortfalls and Potential
(Click on time for permalink) 12:12 AM