From Guns to Steel Skeletons, Blanc to Mies: Interchangeable Parts and the Beauty of Design 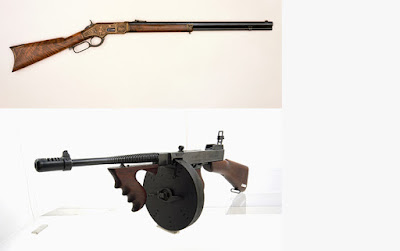 As we've mentioned before, our current conditions, including architecture, derive from being at the culmination of the Age of the Supply Chain, whose defining impulse is bringing the widest range of goods to the broadest number of people over the farthest geographic range using the minimum of human labor.

One of the key components of this process is the standardized, interchangeable part.  It's expressed clearly in the modern architecture of the grid and skeleton frame.  A modern skyscraper is, at its essence, a collection of standardized, interchangeable parts, assembled into modules that in themselves are repeated to the compose the pre-defined extent of the building.

While Eli Whitney, with his cotton gin, may have been the first person to make interchangeable, standardized parts an integral part of design, he was not the initiator.  That honor most often goes to French gunsmith Honoré Blanc, who developed the basic idea but was met with an uniform lack of interest from his countrymen in making it reality.  No less than Thomas Jefferson invited Blanc to migrate to the United States to be able to carry out his innovation, but to no avail.  And so it's Eli Whitney in the textbooks.

There is no underestimating the role of war in furthering technology, and so it should not be surprising that it was in the context of creating reliable firearms that the idea of interchangeable parts first found fruition.

Tomorrow, Tuesday, November 10th, curator Ashley Hlebinsky of Wyoming's Cody Firearms Museum will lecture on From Protector to Perpetrator: Demystifying Firearms, the last of a series of Taboo Subject lectures organized by School of the Art Institute Professor Ben Nicholson.


The design and manufacture of firearms stands as one of the great achievements of the Industrial Age. The process pioneered the "American System" of manufacture that standardized mechanical reproduction on a massive scale. Gun and ammunition design has its own logic and, when demystified, can inform other disciplines. Ashley Hlebinsky will discuss the ways in which firearms are stigmatized in culture and how those perceptions can lead to obfuscation of the distinction between firearms and firearms violence in history.

Yeah, I know.  My first reaction was a kind of dumbfounded "WFT?" as well.  Yet if the Defense Department gave us the Internet (sorry, Vice President Gore), as well as numerous other core technologies we all depend on, a look at guns from a design standpoint might be a fairly essential perspective in understanding how we got where we are today.

Email ThisBlogThis!Share to TwitterShare to FacebookShare to Pinterest
Labels: Ashley Hlebinsky, Ben Nicholson, interchangeable parts, SAIC, School of the Art Institute of Chicago, The Age of the Supply Chain