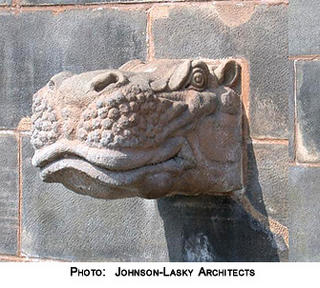 On October 15th, the Richard H. Driehaus Foundation honored nine preservations projects with its Preservation Award. Top prize went to the Renaissance Initiative, Inc., which has rescued 10 historic structures in Danville. Other honorees included the 1920's era American Bankers Building in Jacksonville, and the Hinsdale project that saved the endangered R. Harold Zook Home and Studio and moved it to a village park two miles to the south of its original location. The Landmarks Preservation Council of Illinois has done an exceptional job of documenting these projects on their website. There's a brief one page description of each project, accompanied by a slide show that documents it in photographs from start to finish. Particularly good is the slideshow depicting the rescue of a little known civic gem, the 1903 Jackson Park Animal Bridge, from a state of vandalized disrepair to a complete $6,200,000 reconstruction and restoration in 2003 that made the bridge and the numerous animal heads new again and secured their future new generations of delighted visitors. In another sign that Chicago's architectural institutions are finally coming to terms with the power of the internet, the LPCI site does an exceptional job of documenting the honored projects and illustrating the actual process of restoration.