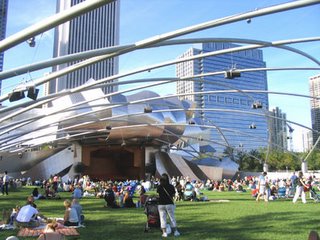 Blair Kamin has a good story in this Sunday's Tribune on how the AIA's 2006 Regional and Urban Design Honor Award recognizing Chicago's Millennium Park gives the biggest credit to Skidmore Owings & Merrill, which is kind of like an giving the award for the Mona Lisa to the guy who sold Da Vinci the canvas.

SOM's original plan was competent - and embalmed - a bland regurgitation of Burnham and Bennett's original Grant Park designs from the early part of the 20th Century, which, in all fairness, was exactly what the city was looking for at the time. As Kamin points out, its not SOM but the park's project director Edward K. Uhlir who deserves most of the credit for overseeing the transition of the park's design from derivative to spectacular. Uhlir was the ringmaster who choreographed a diverse set of powerful personalities from Cindy Pritzker to Frank Gehry to Mayor Daley to fund-raiser John Bryan to create an entirely fresh and new consideration of what a city park could be.

At a symposium at the time of the park's opening, Frank Genry, architect of the Pritzker Pavilion, the undeniable centerpiece of Millennium Park, set the record straight. "Adrian Smith (of SOM) was doing the park," Gehry related, "and he called me and asked if he would do a fish sculpture on either side of his proscenium. And I said no, I don’t do fish sculptures. And that was it. I didn’t hear from him again, and I forgot all about it. "

"And then these guys (Uhlir and company) called and came out to see me. Before they came they said it was for Grant Park, and I said I already told them I wouldn’t do the fish sculptures, and they said, no, no, we’ve got something else. They said they wanted me to design this thing in the park, a bandshell. Then I said, aw, come on, I don’t want to do a bandshell in the park . . . come all the way to Chicago to design a little bandshell. I said if you’re going to do a music thing you’ve got to make it substantial . I said if I’m going to do it, I’d like to like to design the relationship between the audience and the stage. I think that’s a magical thing when it works. They said, oh, you can do that. I said, gee, that’s great. They said, we’ll even throw in the bridge if you want to do it."

It was Uhlir's vision, direction and persistence that created what we know today as Millennium Park, not SOM.

If you want to see something interesting that SOM is actually doing, check out the press release sent out this week on Adrian Smith's entry into a competition for the proposed 69 story Pearl River Tower in Guangzhou, China, a design concept where the building would actually produce more energy that it consumes, by directing wind into the structure's mechanical floors to power wind turbines that supply electricity for the HVAC. "This is an iconic, high-performance building that is designed in harmony with its environment," the release quotes Smith as saying. "It is a skyscraper for a new age." The competition's winner, chosen from three finalists, is expected to be named next month.

Lynn,
You don't have the story right on the Gehry fish thing. I asked him to do the Precenium, not to do a fish. I asked him as an artist to get involved and he told me no because he is an architect and wanted to do more. I reported this back to the committee and the subject stalled for a while because there was a point when we were looking at covering the seating area and the precenium design was up in the air. Then Cindy called him and asked him if he would do it and he said he would. It was SOM that located and advocated for significant pieces of art to be placed in different sections of the park and we worked with John Bryan to establish "gifting" opportunities for the park. Anish Kapoor was selected as a sculptor by the arts committee which I was on. The landscaped garden was selected by the competition process which I was on, the oval seating area and the bandshell location was in our early master plan as were the terraces, promenade, Ice skating rink and fountain. Ed Uhlir did a great job of coordinating all of the diverse consultants and artists to get the job implimented but he wasn't the person who conceived the master plan. This is an award for Master Planning and Urban design, not architecture and as such Ed will be recognized as the clients representative, not its author.
Regards,
Adrian Smith

Suprise Suprise open your eyes...Some people believe that to create is great but build is like changing the past forever... If you want to create a beautiful home Visit building contractor and you can see what a little change can create..

The landscaped garden was selected by the competition process which I was on, the oval seating area.
Air Conditioning Repair The Woodlands