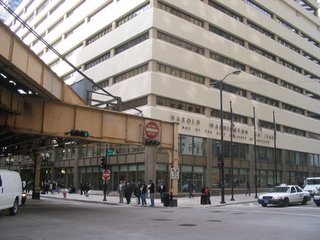 The downtown Chicago corner where the Loop El turns from Wabash onto Lake has not had a happy history. On February 4, 1977, a rush hour train slammed into the back of the train ahead of it, causing three cars to plunge to the street and a fourth to dangle down from the tracks, killing 11 people and injuring 180.

The corner's intervening years have been less lethal, but increasingly dispiriting, as its buildings grew increasingly dark and decrepit. The capper could be said to have been the construction of a new Loop College, later renamed in honor of the late Mayor Harold Washington, whose basic style was a kind of bomb shelter modern . . . a redesign by the Chicago architecture firm of Holabird & Root has blasted apart the bunker on the first two floors . . . read the full story - and see the photographs - here.