Work has begun on the site of what will be the Waterview Tower, an 82-story high mixed used development on newly reconstructed Wacker Drive at Clark Street, along the south bank of the Chicago River. In Sunday's Chicago Tribune, Blair Kamin writes of a twist in the design of the 1050 foot high tower, by Teng & Associates' Tom Hoepf, that leaves the upper stories resembling "a right triangle." Viewed from the 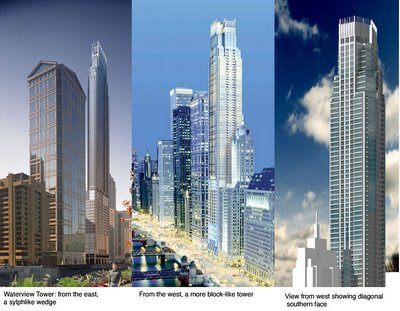 east, the side of the big money of Michigan Avenue and Trump Tower, the building is a razor-thin 32 feet wide. Viewed from the west, from what could be called the "service entrance" side of the building facing the more workaday environs of the West Loop, it grows both wider, blunter and less graceful: less Twiggy, more Margaret DuMont. More wrapper, more views, more revenue. 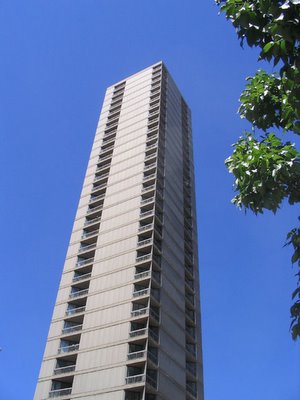 It puts me in mind of another Tromp d'oeil building, Asbury Plaza at Dearborn and Chicago, which, viewed from the corner, conceals its 300 foot long bulk to appear as a bafflingly small, square tower.

From one rendering, it appears Waterview Tower's south facade will mediate with a certain amount of panache between the wide and narrow of the east and west facades. I'm probably more concerned about what appears to a tall, sheer blank wall along Wacker and Clark, above the retail, covering up the parking garage, which the floodlighting shown in the drawings may not be able to redeem from an oppressive street presence.

The slightly schizoid faces of Waterview Tower is actually a good personification of the way the project is trying to bring luxury to uncharted ground. The trains of the Loop elevated screech along their rails just a half-block south. Not that long ago, the area was home to the Shangri La, a soft-porn movie theatre torn down to make way for what is now the Renaissance Hotel. Now, Waterview Tower is to include the first Chicago outpost of the five star Shangri La hotel chain, as well as condo's that start at close to a million and just keep going up from there. Its being constructed on the last unbuilt parcel along West Wacker Drive, a surface parking lot that's been there for decades. It joins such skyscrapers as the Leo Burnett Building and 77 West Wacker, and probably puts a big red redevelop-me "X" on the C.F. Murphy's handsomely brutalist 55 West Wacker, a big building in 1968 that now finds itself a shrimp in a tank of giant lobsters.

What with Trump Tower, and Calatrava's Fordham Spire, it's astonishing there's still unquenched demand for this kind of king's ransom housing. Maybe after prospective owners work out their mortgage payments, the proximity to cheap public transportation will seem a major selling point.

Does anyone know where the third rendering came from (showing the southwest corner with the diagonal)? I have not seen it before.

re 55 wacker and Waterview tower. Sure does cry out for redevelopment. Use it as an "base" for a modern glassier tower?