Chopin Broccoli in Grant Park: Dan Burnham, no, but this, tak?

As the ongoing all-media coverage of the medical travails of the CSO's Riccardo Muti would indicate, Chicago takes its music very seriously.  Grant Park is already home to memorials to CSO founder Theodore Thomas and it's late music director George Solti.   So it would seem a natural, especially considering Chicago's status of having a larger Polish population than any city outside of Warsaw, to add a monument to the great composer Frederic Chopin.

And the group Chopin Monument in Chicago plans to do just that, with a replica of sculptor Waclaw Szymanowski's Warsaw original, designed in 1907, cast and erected in 1926, destroyed by the Nazi's in 1940, and recast in 1958.  A full size replica already exists in Hamamatsu, Japan.

Apparently the project is already pretty far along, pretty much under the radar.  If you run, you can still catch the Grant Park Advisory's meeting on the proposed monument, starting at 7:00 tonight, Tuesday, February 8th, at Daley Bicentennial Plaza, 337 East Randolph. (If you attend, send me a report and I'll pass the information on.)

No doubt about it; this thing is huge: 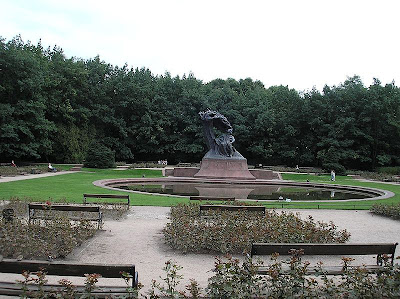 click image for larger view
Not to be churlish, but is this really a good idea?

I suppose if it gets built, it won't be a tragedy, but why is a handsome memorial to Daniel Burnham, designed by Chicago architect David Woodhouse, unacceptable, and this huge lump A-ok?

A monument to Chopin is a great idea, but isn't Chicago a world-class city, at the front rank of the global arts scene?  And, if we are, for Chopin and for Chicago, is this overscaled copy of a copy of a century-old design really the best we can do?

And, really, if we're going to start building copies of things, why not the Lincoln Memorial?

and I want a copy of the Leaning Tower to honor the Italians. (oh wait, we've already got one.)

unfortunately, it's much harder to inscribe a dedication on a kid than on a statue or a building.

I hope there are kids who know who Chopin is (beyond the fact that he was Polish - big deal!) in 100 years.