The Big Question no one seems to be asking Rahm, but should 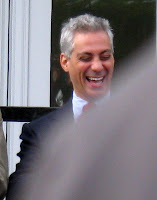 In it's recent history, Chicago has been run in the most part by just two mayors, each of whom served more than two decades.  In both cases, the early terms were marked by conciliation, inclusiveness, optimism and high achievement; the later terms by increasing divisiveness, intolerance of alternate viewpoints, crises of management, and growing frustration.  In both cases, as incumbency was leveraged to accumulate ever great power, ultimately the response to every question  and challenge the city faced came to be perceived as being all but completely dependent on the opinion or whim of just one man.  As an acute observer of both government and politics, you certainly understand that this process results in a lack of depth in civic leadership, just at the moment when the problems of the city grow to where it is most essential.  As a student of Chicago history, you must also know that this question is neither marginal nor premature.

It is often said that George Washington's greatest gift to the new American republic was to set the pattern for a peaceful and orderly rotation of power by retiring from the Presidency at the end of his second term.  Mr. Emanuel, do you see yourself as the indispensable man that Chicago will require indefinitely, perhaps even to the end of your life, or will your administration move quickly to master our current challenges, and will you pledge to serve no more than two terms?

Totally agree. If he said he would limit to 2 terms I would vote for him despite all my reservations.

RP Free Speech said...
This comment has been removed by the author.
6:01 PM

Sorry, I had a few typos! First-time commenter here, and a bit nervous....

Rahm STILL seems too removed from Chicago politics...not that that is bad, but...he is the emissary of BHO, and backed by the current mayor, whom I prefer to call "Dick'em Daley", because that has been his attitude--especially since the Meigs Field "middle of the night' debacle.

Rahm has no interest in 'leading' this great city--only in enforcing a march-step to Obama policies (which really, when you survey the situation, WHAT are Obama's policies, but more drek?

I truly wish the rumors about the 'ballerino' and BHO would surface prior to this election. But...MONEY hides things, doesn't it?