The Art of the Pitch: Selling Goettsch Partner's 53-story 150 North Riverside to the Neighbors


150-Riverside from gene molchanov on Vimeo.

This Wednesday, January 8th at 12:15 p.m. at the Chicago Architecture Foundation, Steven M. Nilles and Joachim Schuessler of Goettsch Partners will be offering a preview of the firm's latest Chicago project, 150 North Riverside.   Details here.

How do you sell a skyscraper?  If you're in the middle of Chicago's Loop, you don't, really.  You fill out the forms, talk to all the right people, get the approvals, find tenants, land the financing, and start the job.  If you're in an area you share with residential buildings, however, the process becomes a bit more complex.
If you have an alderman like the 42nd ward's Brendan Reily, who's fairly conscientious about such things, there are public hearings to bring developers and residents together, and often it's a clash between two very different cultures.  The developer inhabits the macro culture, populated by  accomplished specialists and connected insiders.  Residents inhabit the micro culture, reflecting personal experience and day-to-day, moment-to-moment concerns such as traffic, shadows, light and views.  When things get tense, developers, and the those in their wide, informal support structure, often paint those in the micro culture as NIMBY's, hidebound opponents of anything new or progressive, consumed by narrow self-interest.  And truth be told, some people at public hearings do exhibit a vision so constricted that a horse in blinders would look upon it with pity.
It is entirely reasonable, however, that not only those with big bucks and big plans, but the people who have created and sustained the communities that are about to be transformed also have their voices heard.  Sometimes what would seem to be obvious questions can evoke the best answers, and that was the case at a well-attended Reilly-sponsored late-summer public meeting at the Hotel Allegro, where residents got their first in-depth look at plans for a 53 story, 700-foot-skyscraper, 150 North Riverside, on a site next to and over Amtrak tracks that has been vacant for fifty years. 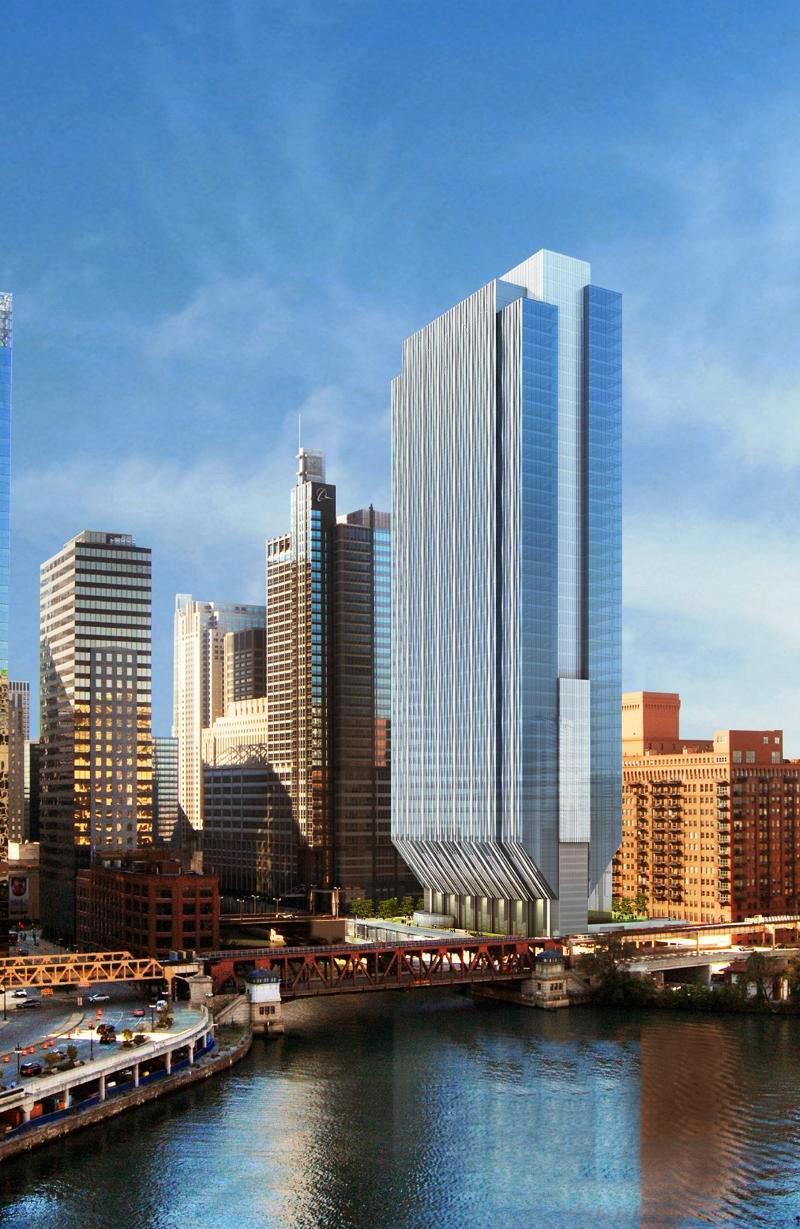 150 North Riverside is the maiden project of developer John O'Donnell following his 2010 retirement as CEO of the John Buck Company, where he had a 28-year history.  “This is a site I pursued,” said O'Donnell,  “for roughly a decade in my prior job.”  He seemed genuinely proud of his new baby, and
the presentation by his team was perhaps the best I've ever encountered, exceptionally well-prepared not just to pitch the preferred talking points, but anticipate community concerns.  (The one glaring exception was when an audience question about migratory bird collisions found O'Donnell's team taking on a deer-in-the-headlights look that suggested this was a topic that somehow had never come up in rehearsal.)

One audience member, a local businessman fashioning himself an amateur expert on real estate who had conducted his own extensive research, launched into an extended argument that, with office vacancy rates currently hovering around 17%, no anchor tenant yet announced, and only one  -DLP Piper - still in play and most likely headed to the already under-construction River Point tower, the most relevant question about O'Donnell's $450 million project was “Why?’

Rather than the polite, vague answers that would be the usual developer's response to such a query, O'Donnell, instead, turned to U.S. Equities' Drew Neiman. Neiman is another long-time (27 year) former Buck-ite.  In his new role at U.S. Equities, managing the leasing of 150 North Riverside, he offered a revealing look inside the mind of a developer as he calculates the odds on a project such as this . . .


The marketplace in general has about 145 million square feet in the CBD [Central Business District].  So we'll call that the denominator.  As you stated, the average vacancy - it depends upon the report - probably it can go anywhere from 13.3 to 14.5% vacant depending on who you talk to, and how they record vacancy and occupancy.

If you would go to buildings that are similar to [150 North Riverside], we call those
Class A+,  really technology robust type buildings.  That equates to about 10% of the total amount of square footage in Chicago, so of the 145 million, about 14 or 15 million are buildings similar to this.  Buildings that have been been developed since 2000.  So they've got floor-to-ceiling glass, 45 foot core to glass dimension, robust vertical risers for electrical and telecommunications.  These are buildings that are the next wave and the new generation.

The vacancy rate of that 10% of what you call the cream-of-the crop, if you will, is between 3 to 5%.  That's 10% below the rest of the market.  That means that there is a demand for those type of buildings.  Every one of those buildings that have been built since 2000 has leased up.  The reason, as you state, [is] today corporations - including law firms, consulting firms - are all trying to fit more people into less space.  So they're consolidating, or in some cases you talked about even subleasing some space or giving it back.  Or if they can, relocate to a new building where they have a better floorplate, a more robust infrastructure that can handle their needs in less square footage.  And so as a result, there is a demand there.  This submarket is very healthy and there is a demand.

When pressed on whether the project had an anchor tenant in sight, Neiman was a bit more vague . . .


We can only reveal so much here tonight.  Let me just say this, that we wouldn't have proceeded and spent the money and done what we've done, if we didn't think that there was a demand with anchor tenants whose leases expire in 2016 , 2017, possibly even 2018.  And so we've done our homework and we know who's out there.  We're feeling very comfortable that this will be well received.

The questioner was right about DLP Piper.   In July, the firm announced they were moving to River Point, committing to 175,000 of that project's million square feet.  Neiman seems also to have been correct about 150 North Riverside.  Late last month, William Blair and Company announced they're planning to move to 150 North in 2017, taking up about a quarter (300,000) of O'Donnell's 1.2 million square feet.  O'Donnell is claiming construction will begin this coming summer. 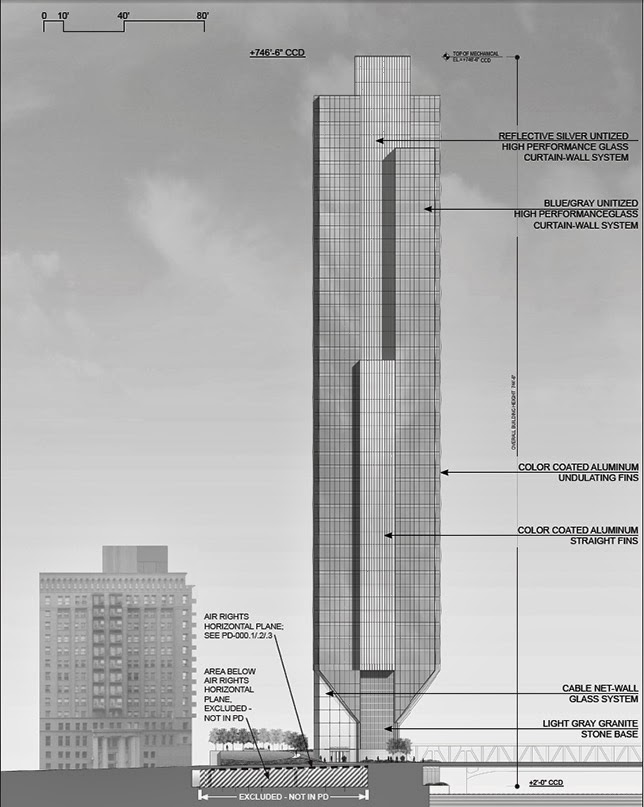 There were also questions at the community meeting on 150 North Riverside's Design.  We'll be taking those up in our next post. 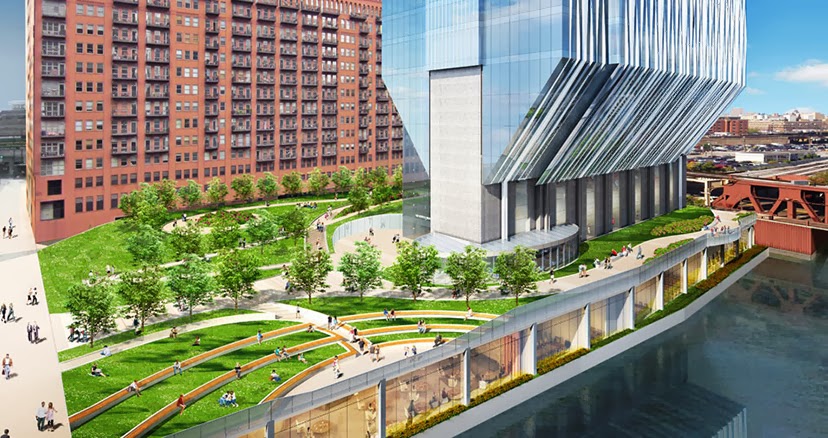