It stood for over a century, and was gone in an instant. 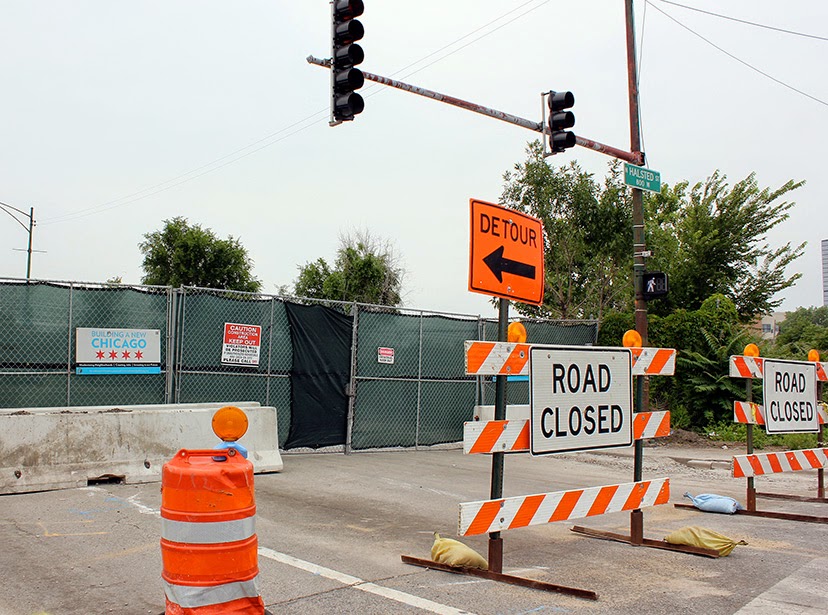 Constructed in 1903, the East Division Street Bridge over the North Branch Canal at Goose Island was the direct result of the investigations of Chicago City Engineer John Ericson to find an alternative to the city's traditional swing bridges, whose center piers had become navigational hazards as commercial traffic on the river intensified.   Inspired by London's Tower Bridge of 1894, Ericson and his team came up with what became known as the double-leaf bascule, with two movable segments raised and lowered by motorized equipment at each bank, leaving the center of the waterway unobstructed.
The bridge at Division, designed and built by Jules E. Roemheld and John J. Gallery, was one of the first to follow this new design strategy, replacing a swing bridge that had been constructed in 1870.   240 feet in total length, each of the two leafs was supported by 101-foot-long steel trusses. (You can read more about the bridge's history on the indispensable  Historic Bridges website.) When fully opened, it freed up a clear channel 80 feet wide. Instead of the usual sharp-angled end structures, those on the Division Street were arched, resulting in the bridge being bookended at either end by graceful rounded curves.
The National Park Service's Historic American Engineering Record on the east Division Street Bridge noted how “since the movable leaves were counterbalanced, relatively little power was required to open and close the bridge . . . a single, direct-current, 75-horsepower motor mounted, along with the rest of the lifting machinery, on an inclined steel platform spanning the abutment and first pier beneath the approach roadway.”
Work began on the bridge in June of 1900. Roemheld and Gallery had secured the right to build it with a $133,000 bid.  Problems with leakage resulted in the coffer dams having to be rebuilt, and additional excavation punctured a water tunnel under the canal.  The bridge was finally opened to traffic in February of 1903, at a final cost of over $194,000. 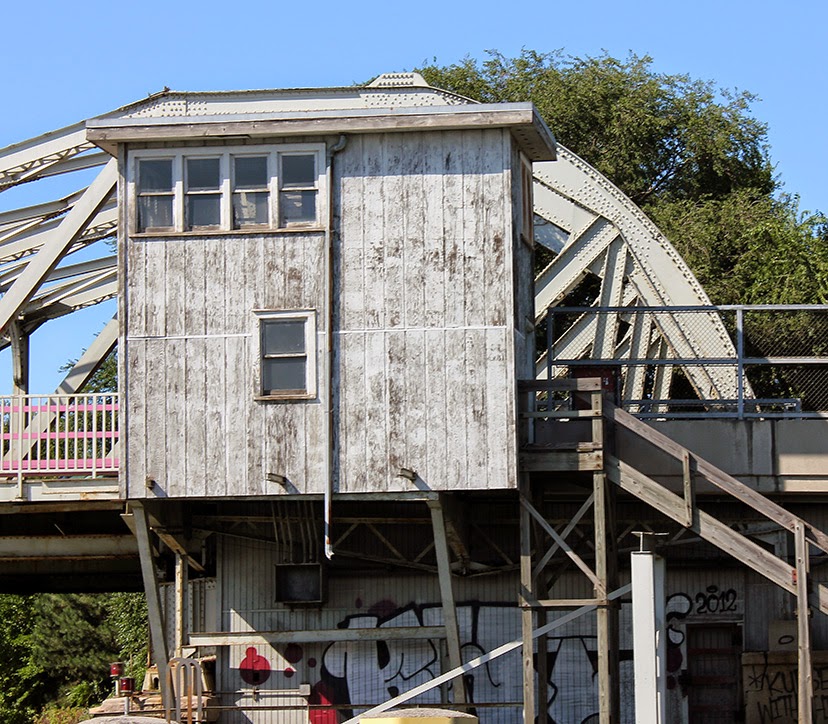 For much of its life, the area around the bridge was home to coal and lumber yards, and during World War II the bridge again proved its worth as river traffic boomed.  After the war, however, shipping entered a steep decline.  The coal and lumber yards closed down, leaving vacant land.  By the 1970's, the city called for closing many bascule bridges that were seldom lifted and expensive to maintain.  The East Division Street bridge rose for the last time in the 1990's.  $6 million has been budgeted to demolish the bridge and replace it with a “temporary” span.

I was at the bridge on the morning of May 16, 1992, when legendary Chicago author Studs Terkel was joined by Mayor Richard M. Daley, Mike Royko and others in dedicating the bridge to the author whose landmark book, Division Street: America chronicled the thoroughfare as a microcosm of Chicago history.  The bridge was re-dedicated in 2012, in what would have been Terkel's 100th year, and there's already a move afoot to make sure the replacement bridge also bears his name.

No one ever mistook the East Division Bridge for a romantic construction, but there was a surprising bit of ornament.  Along the steel of the bridge's overhead bracing, there were repeating punches of the Chicago “Municipal Device”, the Y-shaped civic symbol that represents the merging of the three branches of the Chicago River at Wolf Point.    Their use on the structure can be seen in Urban Remains Eric J. Nordstrom's documentation on the destruction of the bridge here, here, and here. 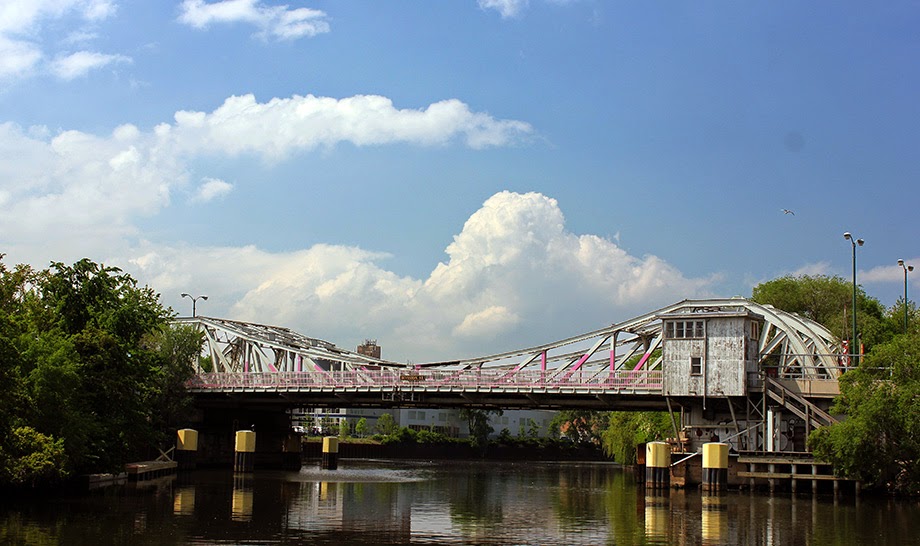 As has been a constant since the 19th century, funds for maintaining the city's infrastructure were often been sparse, and time had not treated the East Division Street Bridge kindly, with major renovations widely spaced in the early 30's, 1969, and then again in the 1980's. Recently, it's members had been painted pink.  In April of this year, trucks and buses were prohibited, and on June 30th, the bridge closed to traffic for the last time. 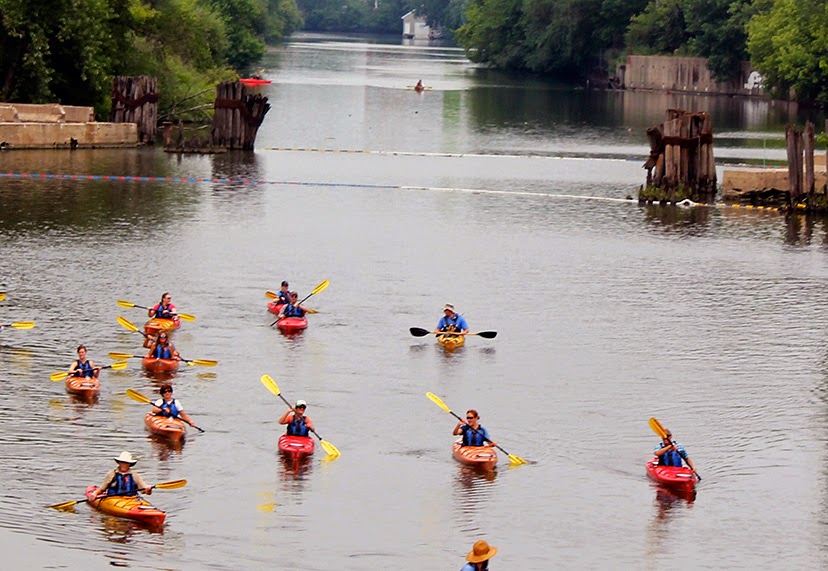 As can be seen at the photograph at the top of this post from our indefatigable correspondent Bob Johnson, the wreckers made quick work of it.  By the time I got there it little more than a week ago, the imposing metal structure that had dominated the view down the channel for 117 years had completely vanished.  You could almost imagine it had never existed, if it weren't for those giant concrete moorings on either bank, standing like some mysterious ancient ruin whose meaning still awaited deciphering. 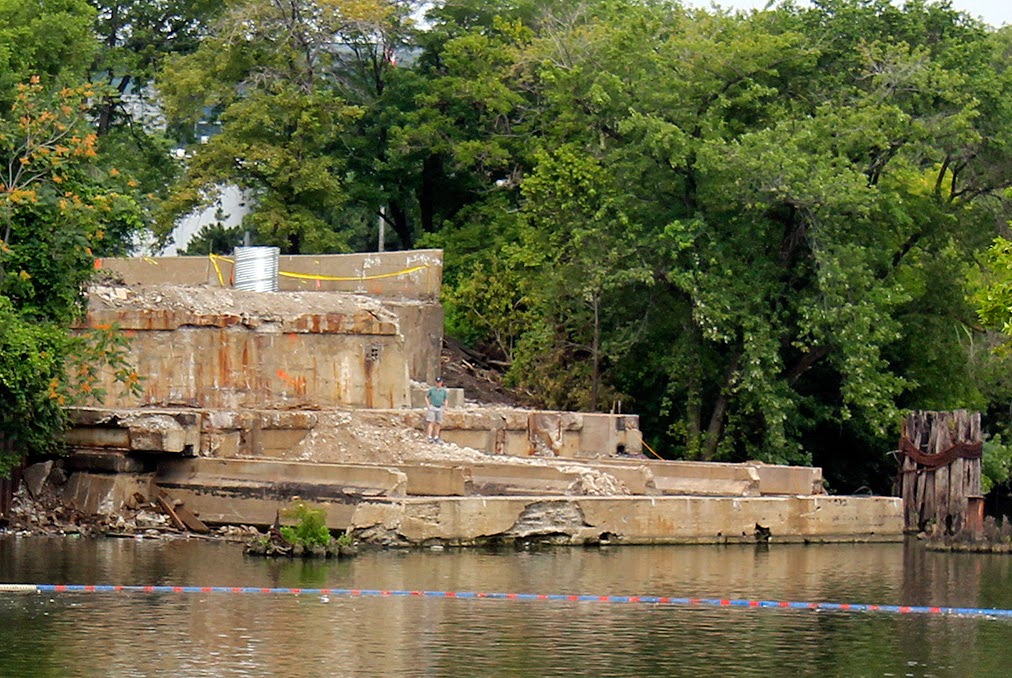 I just started a project going through all of my photos of our from this bridge -- I'd been crossing it five days a week for almost seven years now. You can check it out here: http://chicago-bridge.tumblr.com/

I'll be featuring your post on my blog there as well.

Had anyone seen renderings of what the new bridges on Goose Island will look like? Will they be a similar design to the Halsted bridge that was put up a year ago?