Today the streets will be jammed with people as daredevil aerialist Nick Wallenda's will walk across the Chicago river on a 454-foot steel cable strung between two buildings: the West tower of architect Bertrand Goldberg's iconic Marina City (1964, 61 stories, 588 feet), and Roche Dinkeloo's -post modern Leo Burnett Building (1987, 46 stories, 635 feet). - but many of the distinctive skyscrapers along the Chicago River.   The differences in height between the two buildings will require Wallenda to walk up a 15 degree incline
Last night however, there was more anticipation that people, and the evening had a quiet magic all its own as the huge floodlights as bright as a second sun . . . 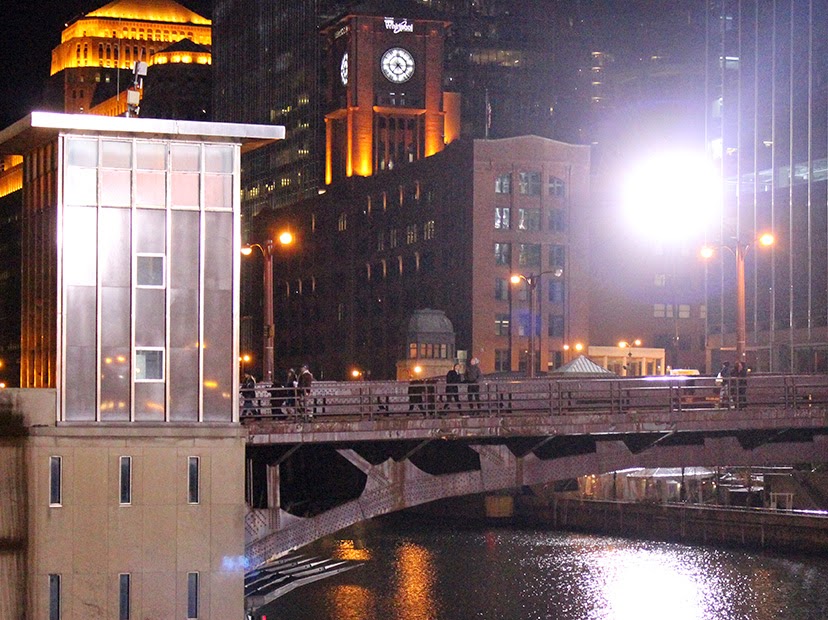 . . .  illuminated not just the two buildings involved in Wallenda's walk, but many of the iconic structures along the Chicago River, showing them up with a dramatic clarity against the night sky . .  . 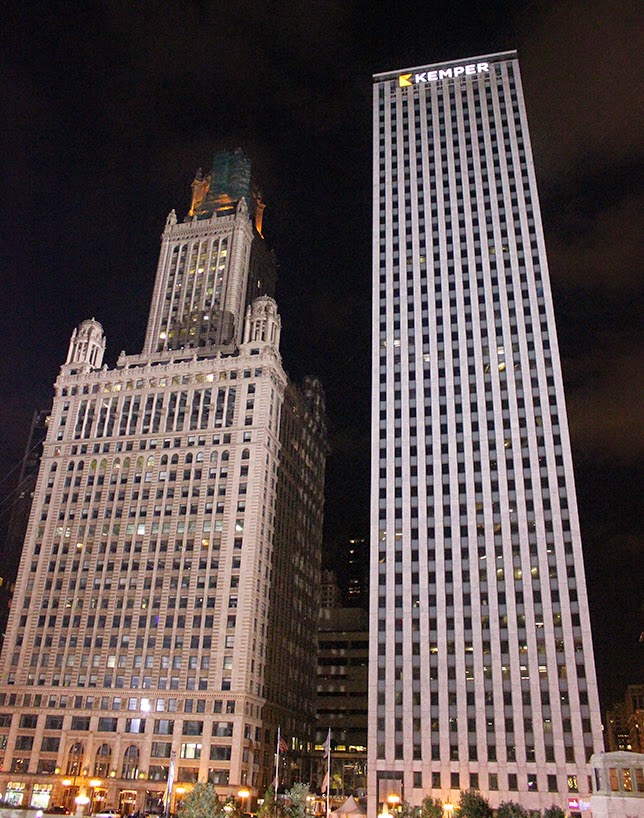 Left, Thielbar and Fugard's 1927 35 East Wacker (Jewelers Building).  Right, Shaw, Metz and Associates, at the time of its 1962 the tallest marble-clad building in the world. 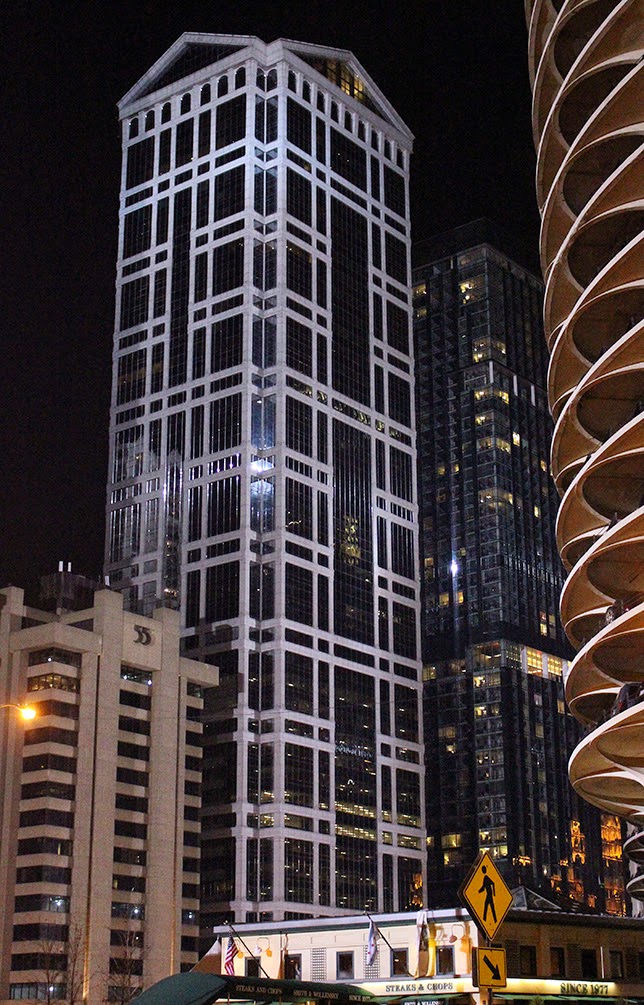 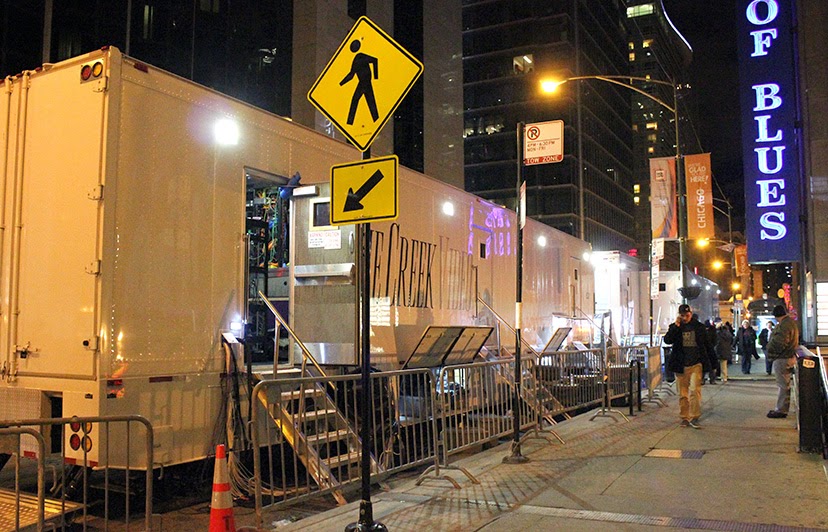 Television production trucks have been lined up on Dearborn since early this week. 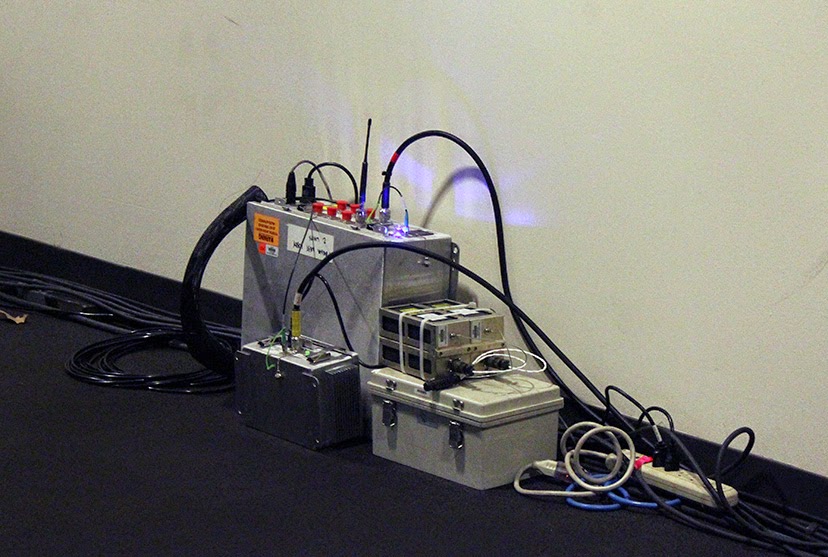 Electricity is being pulled from Marina City, with lobby offices being used as a staging area. 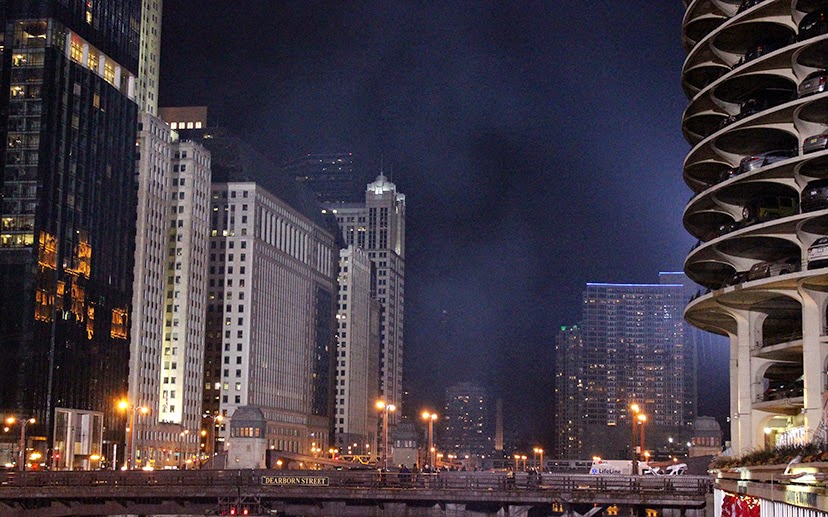 Mist rising over the river is caught in the light. 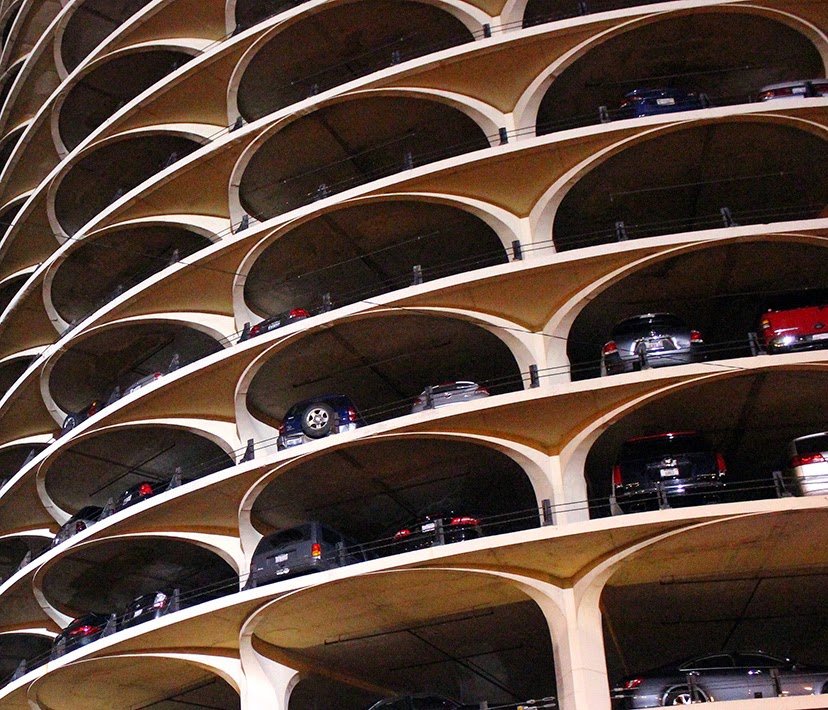 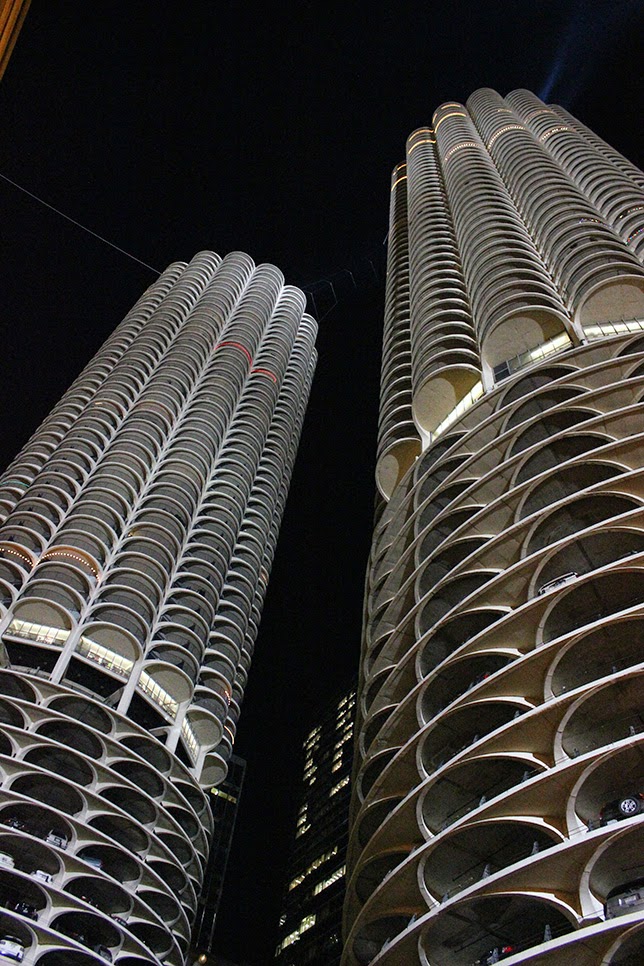 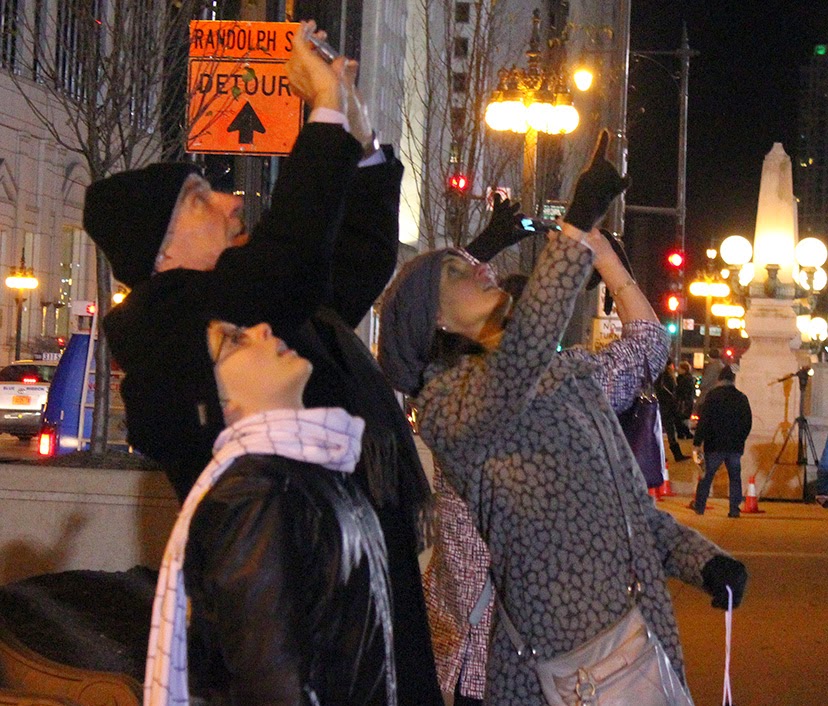 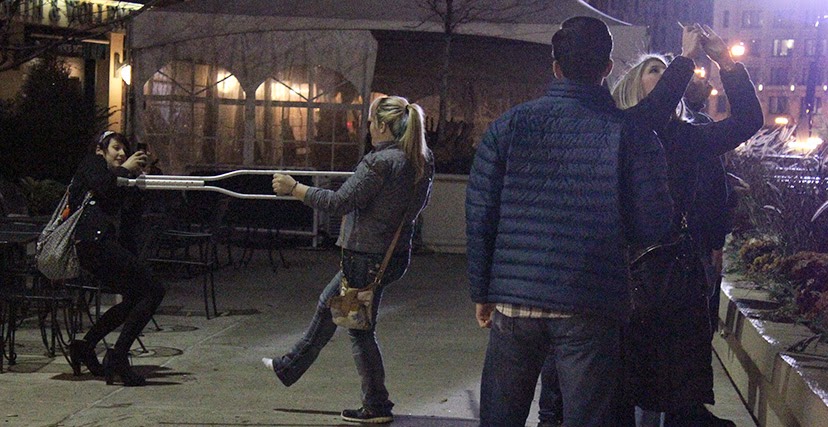 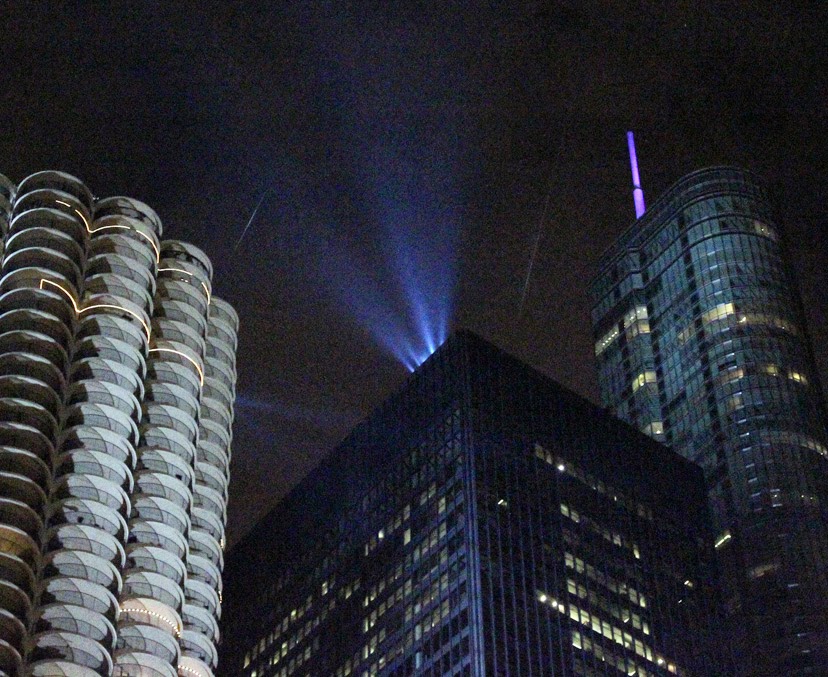 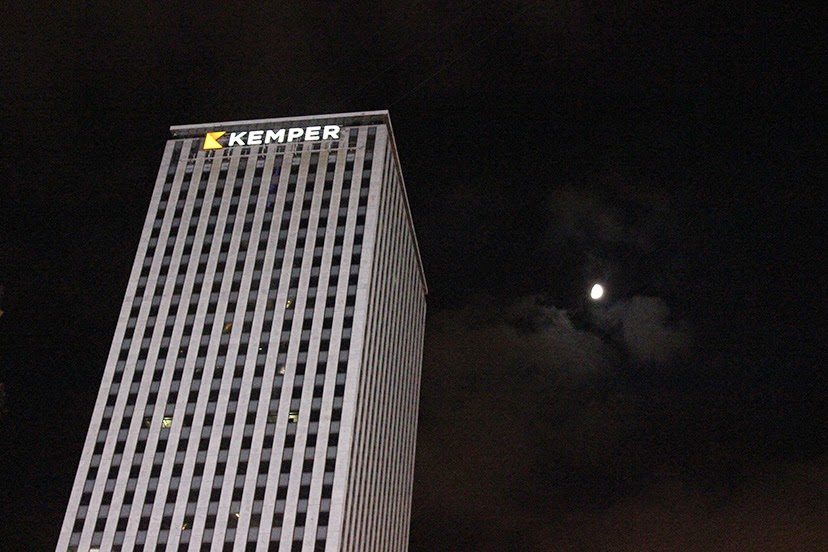 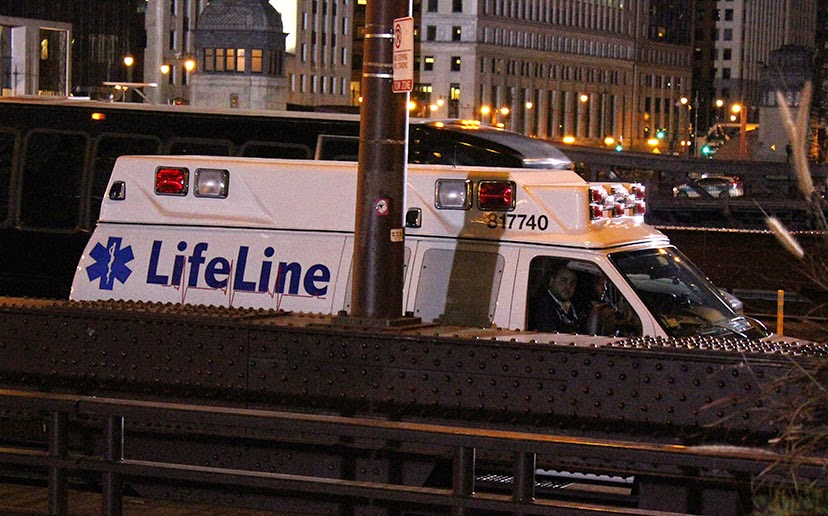 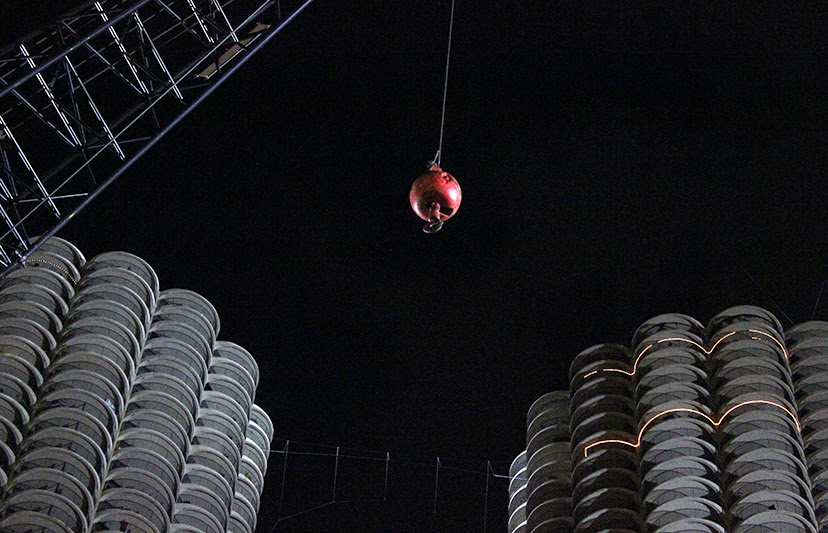 A crane rises for the construction of the new riverwalk along several blocks of the south bank. 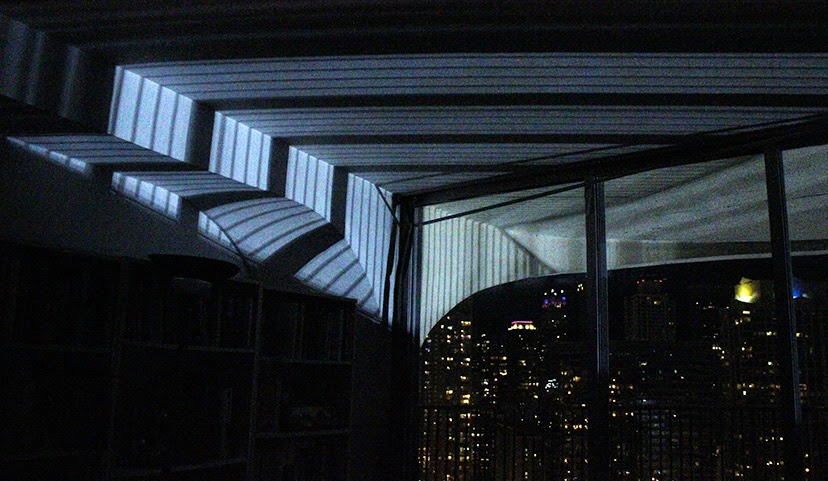 Many Marina City residents are getting lighting that is both free and artistically patterned from the massive floodlights set up along Wacker Drive. 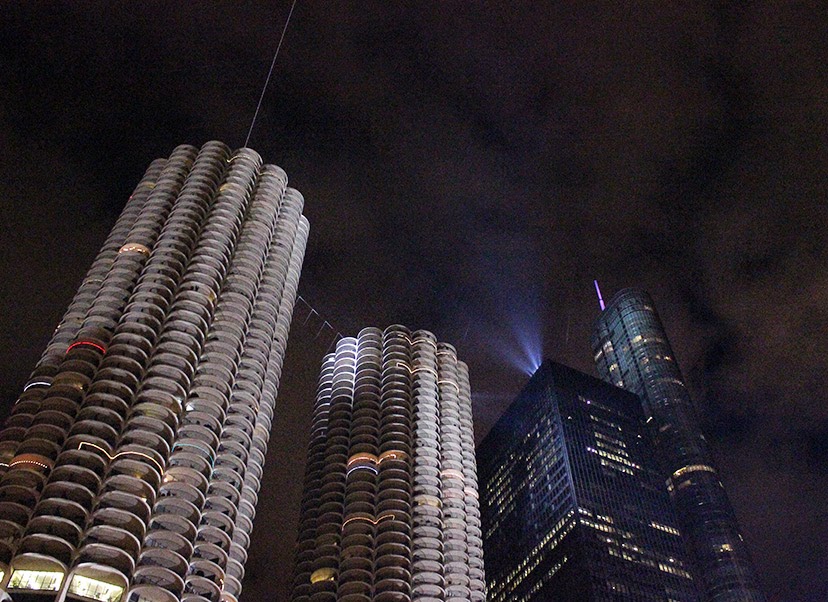 Wallenda is scheduled to make two separate walks, the ropes for each visible in this photograph.  The first is from the West Tower of Marina City (left) across the river.   In the second, Wallenda, blindfolded, will walk on a rope 94 feet from the West Tower of Marina City to its twin to the East.  Live coverage will begin on the Discovery channel at 6:00 p.m., with the actual walks scheduled for 7:00.

Bread and circuses.  On Tuesday, an epic of power will play out at the ballot box.  Every day of week, life and death dramas play out, usually all but totally unseen, in cities like Chicago all across the world, often in innocent-looking buildings just like those on dazzling display last night.  Wallenda's stunt is a dual symbol.  First, of how easily our limited attention and action are diverted from the really important battles that affect our lives.  Second, of how tenuously - as secure as we may seem - our lives cling to their moorings amidst the underlying raw vulnerabilities of human existence. 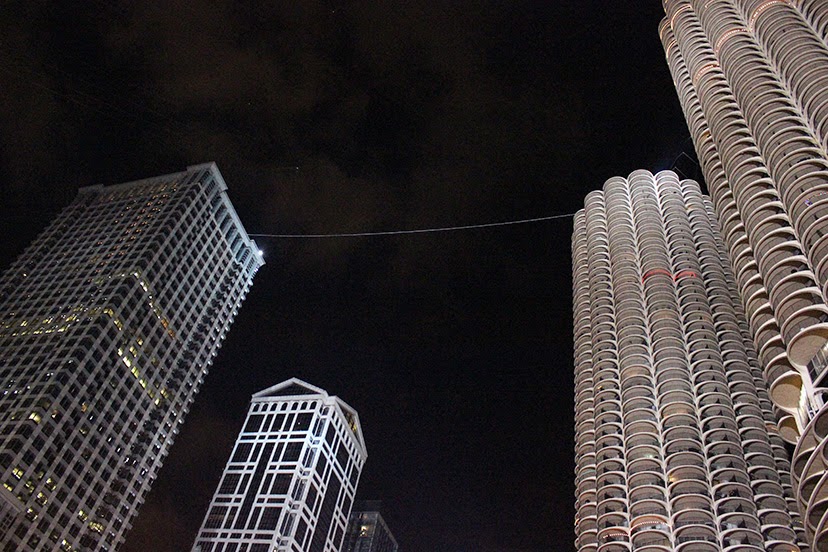 What really impressed me watching the TV coverage at the same time as viewing the street and river spectacle from the Reid Murdoch building, was how eloquent and evocative the Marina Tower roofs were. Nothing extraneous at all up there.