In Daniel Burnham's 1909 Plan of Chicago, Congress Parkway was to be the great civic promenade of the new city.  In reality, it became a feeder ramp for the Congress Expressway.  Where Burnham envisioned the Field Museum, Buckingham Fountain stands.  Congress Plaza itself, the Michigan Avenue gateway to the fountain and Lake Michigan, has also never quite lived up to its potential. 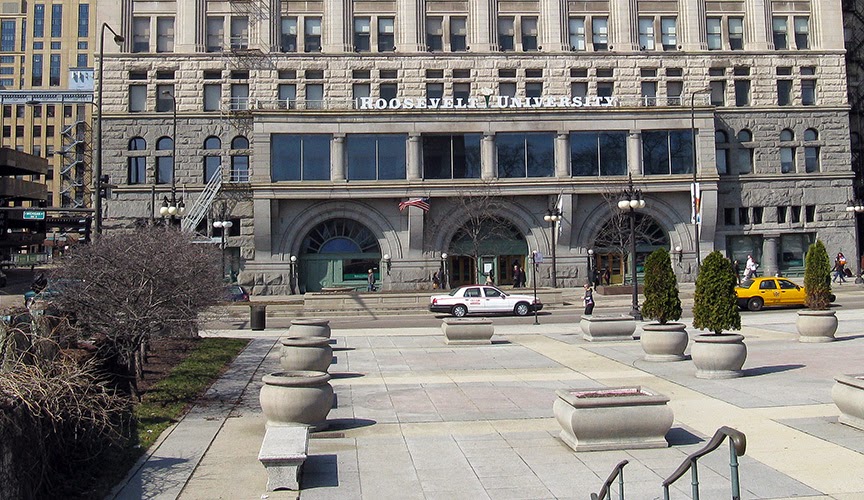 For a while, it was the location of the city's Christmas tree, and for a brief time in April of 1963, it hosted a 9-story tall, 50,000-pound Atlas Missile to celebrate Space Month. 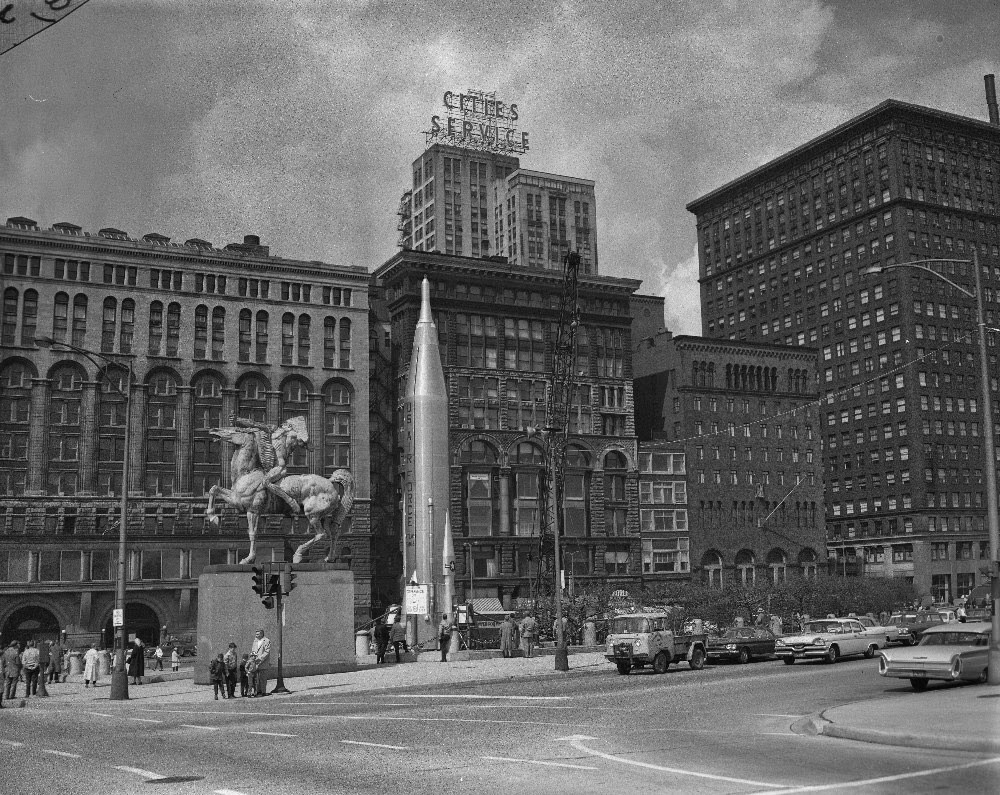 For some time now, however, it's been little more than a barren sweep of concrete, a foreground for Ivan Mestrovic's The Bowman and the The Spearman sculptures, flanking either side of Congress just before it crosses a trench of railroad tracks.
So in that sense it was the perfect location for NFL Draft Town, a mini-city with the shelf live of a Atlas Missile on display.  It marked the draft leaving New York for the first time in 51 years,  setting up shop in and past Congress Plaza and headquarters in Adler and Sullivan's Auditorium Theater across the street. 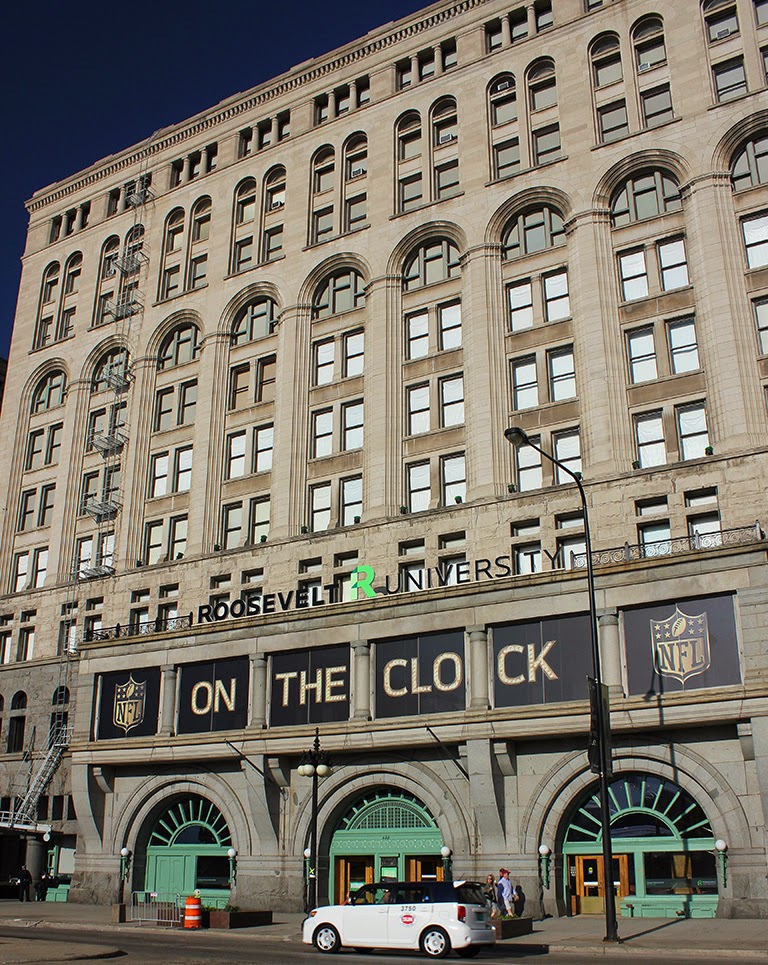 For a few days, we saw temporary constructions pop up along Michigan Avenue . . .
. . .  to counterpoint the classic architecture of its landmarked streetwall. 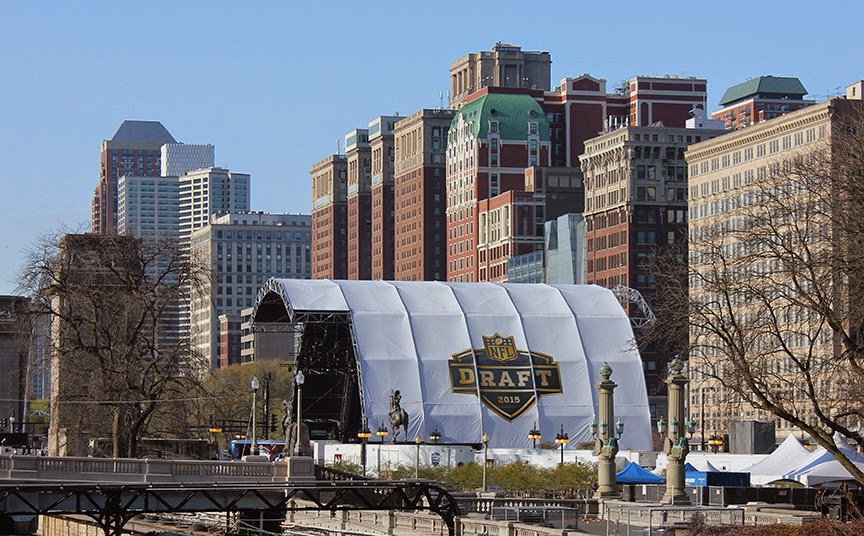 The totally enclosed "Selection Square", looking a bit like a 1940's airplane hangar, was the site of the real action.  It was here the tables were set up where representatives from each team made their draft picks. 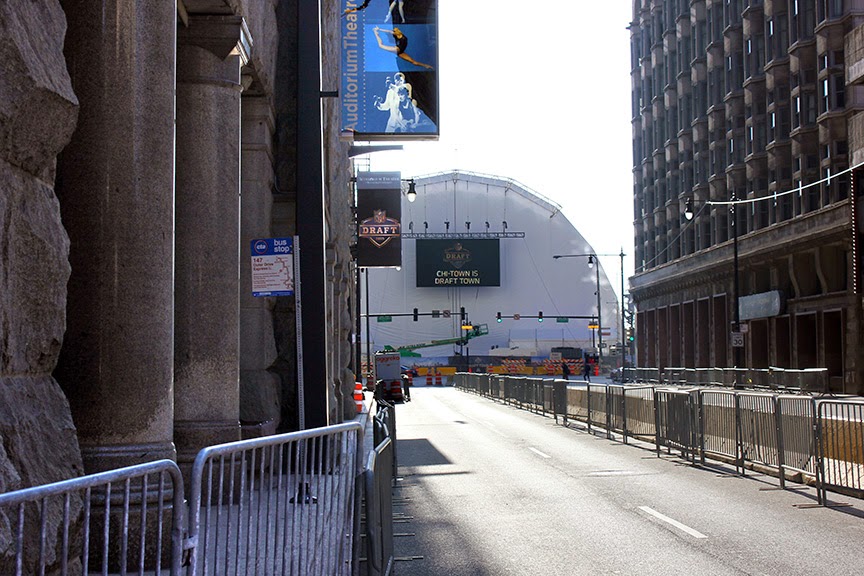 Beyond that was an open structure with attractions for the fans that architect Marc L'Italien  likened to the vanished train shed of the demolished Illinois Central Depot, just a few blocks to the south, similar to the Grand Central Station shed pictured below. 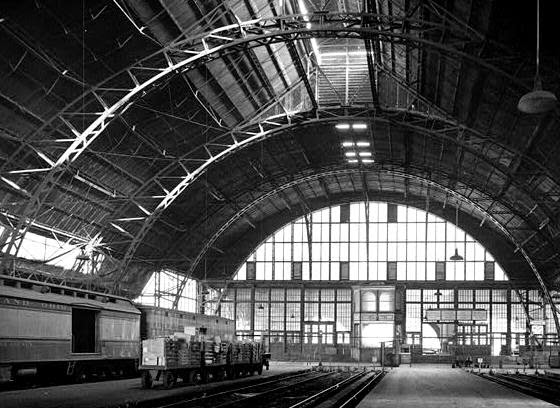 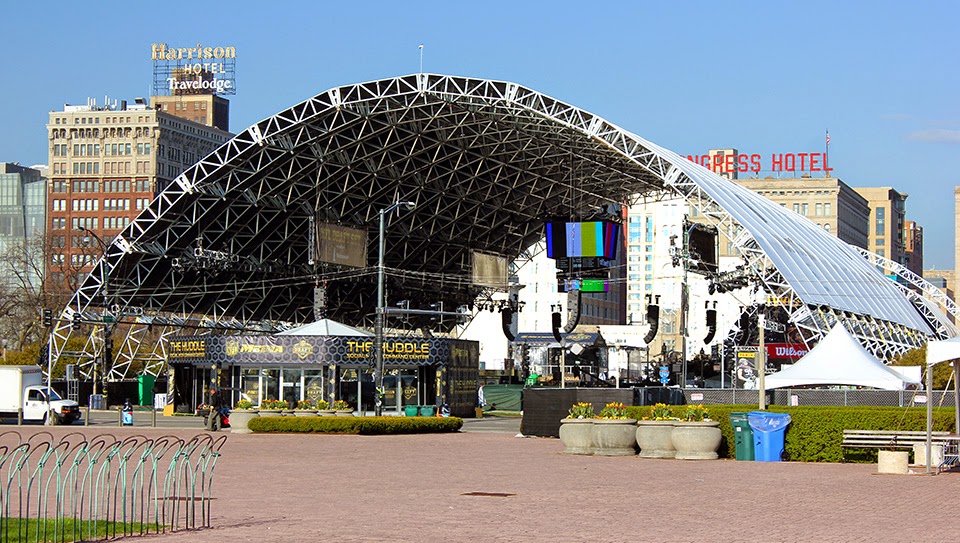 The low arch set itself off both from the arches of Louis Sullivan's auditorium building, and the stepped verticality  of the buildings along the streetwall. 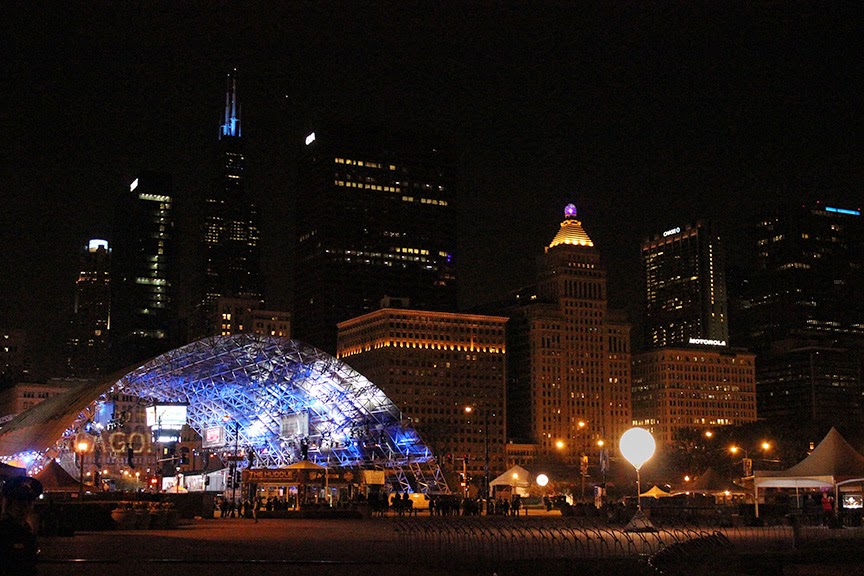 Buckingham Fountain, itself, was turned on a week early for the Draft.  At night, it shifted hues to the team colors of the franchise making its selection at that given moment. 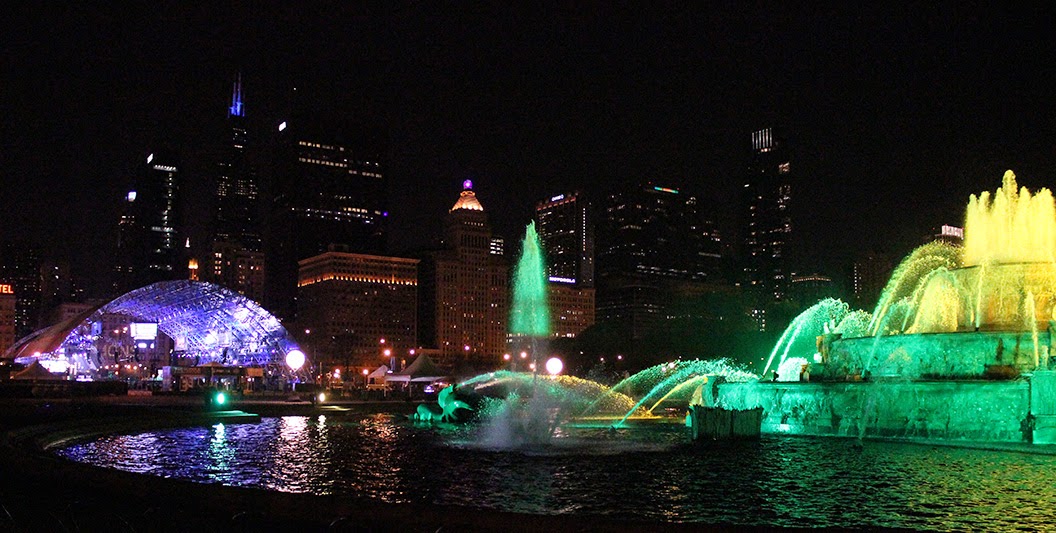 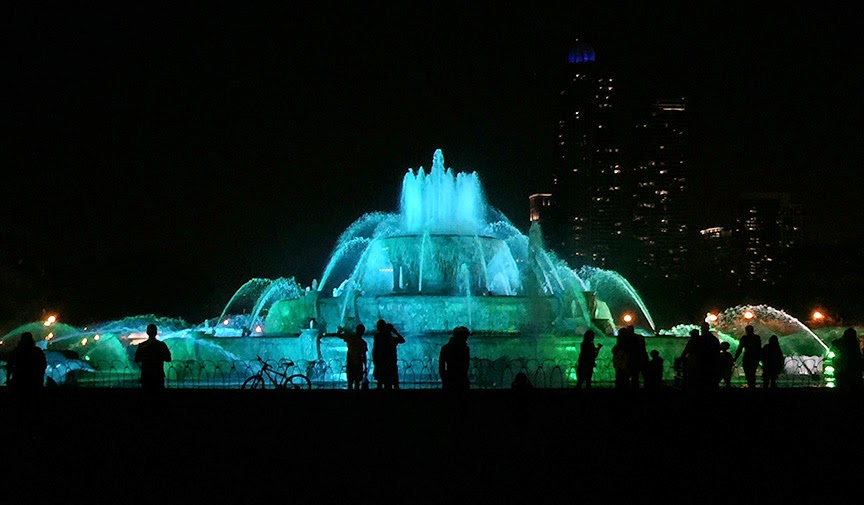 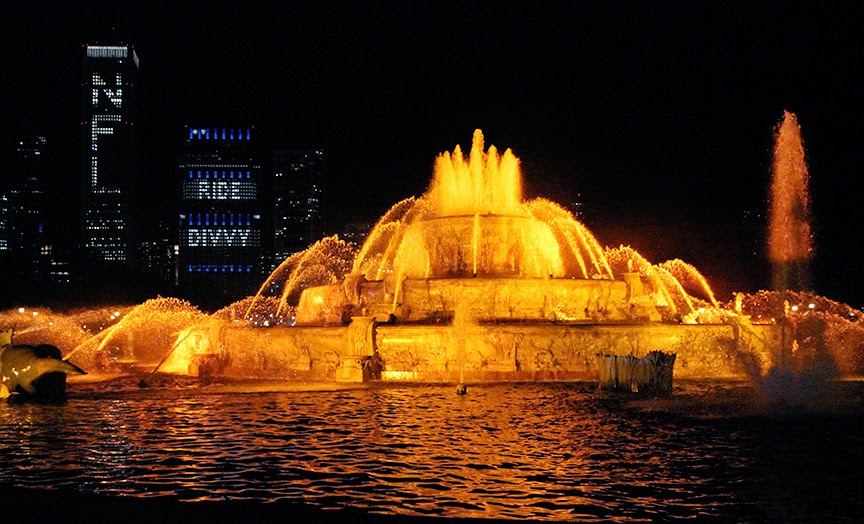 The flamboyant celebration of multi-millionaires playing "pick me!" before a roster of billionaire owners left many a bit queasy, including this projectile-vomiting seahorse. 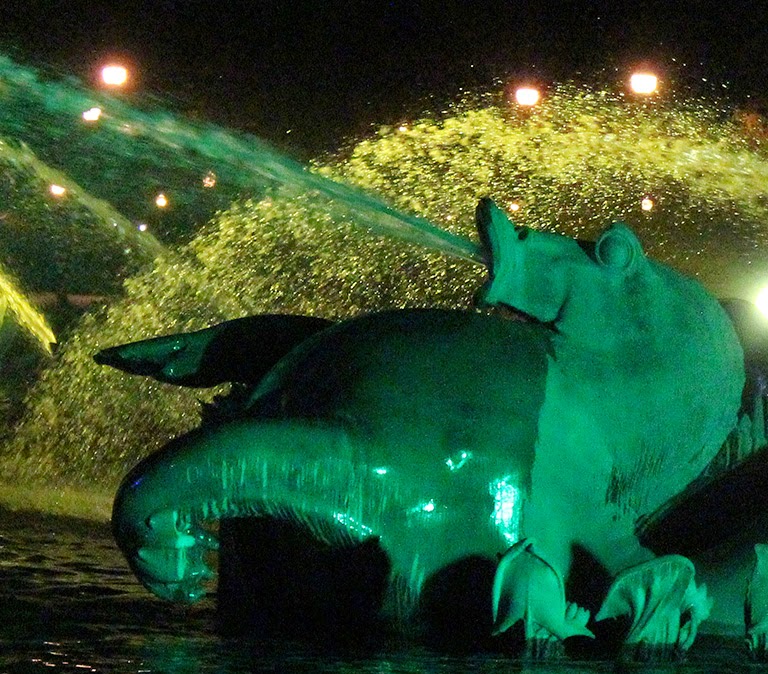 Still, it was an intriguing insertion, playing off a background of great Chicago architecture.  A momentary apparition, now to vanish without a rack.  Wait until next year? 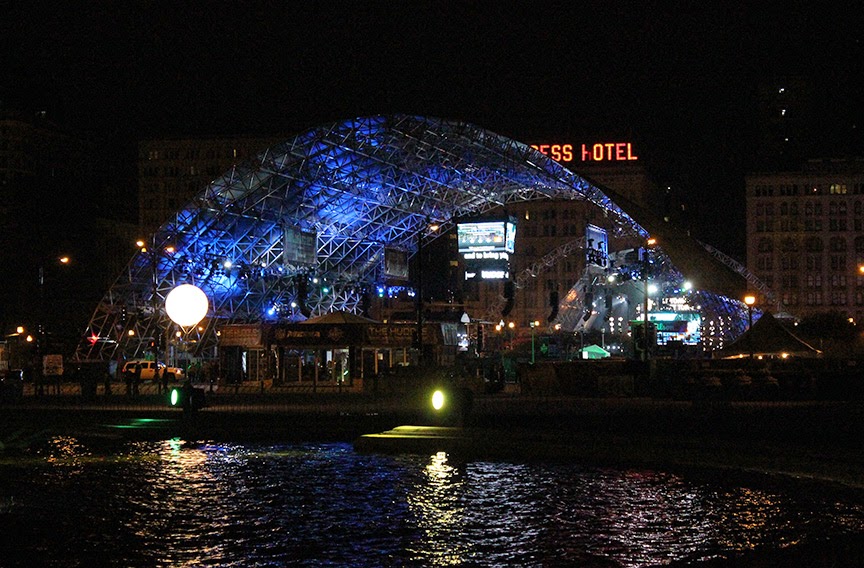 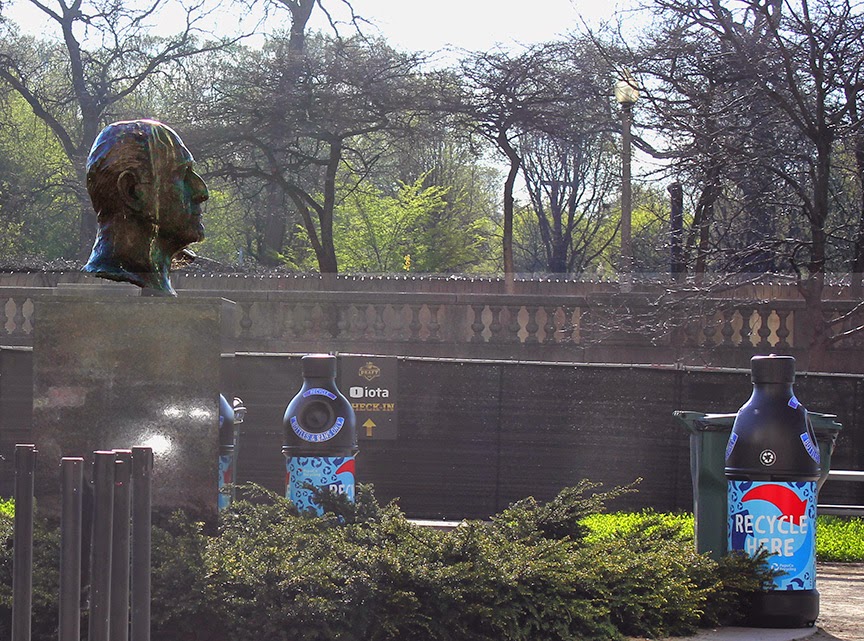 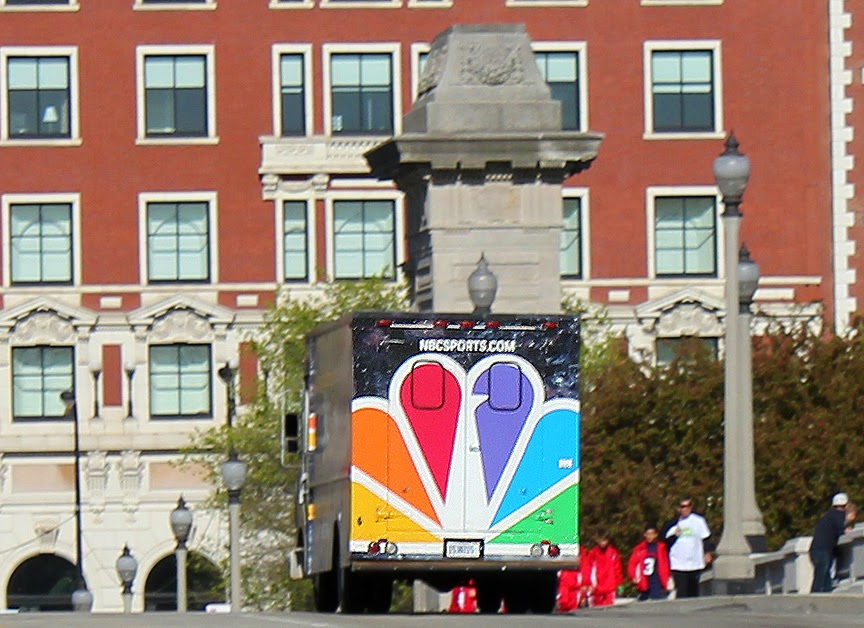 How about Boyington's 1873 Interstate Exposition Building, right in Grant Park as a precedent (tho a bit bigger) http://digital-libraries.saic.edu/cdm/singleitem/collection/mqc/id/13823/rec/612

Or the unfinished Auditorium itself, for the 1888 Convention? http://www.lasplash.com/uploads//498b/5381f155e7f45-auditorium-theater-celebrates-125th-birthday-preview-tour-and-marvel-at-chicago-s-history-and-architecture-6.jpg

The communications bridge across Michigan Avenue was pretty interesting too. http://sportsvideo.org/main/blog/2015/04/live-from-the-nfl-draft-nfl-network-covers-sprawling-footprint-in-chicago-lines-up-60-live-remote-feeds/