Magic Fingers: The Most Spectacular Engineering Show in Chicago Right Now on Display at 150 North Riverside


It will become much taller and much shinier by the time it's finished, but 150 North Riverside will never look quite as spectacular as it does right now. 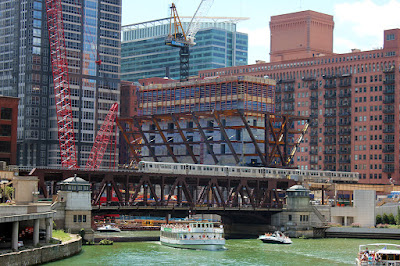 Designed by  Goettsch Partners with Magnusson Klemencic Associates as structural engineers, on a site on the south branch of the Chicago River just after it splits in two, the building will eventually rise 54 stories and a height of somewhere around 700 feet. 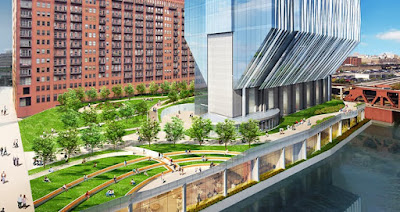 The signature aspect of 150 North Riverside is the way the office floors cantilever out from the central core.  The first full-size office floor doesn't come until Level 8, 104 feet above the buildings plaza, freeing up space for part of a 1.5 acre park that surrounds the building and sits atop the Metra tracks running beneath the site to the west.  As it meets the ground, the building takes up only 25% of the site. 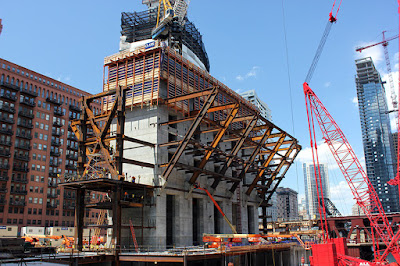 To achieve this openness, sloping columns begin at the 4th floor and rise up and out to support the perimeter columns of the tower's standard 27,000 square-foot floor plates. 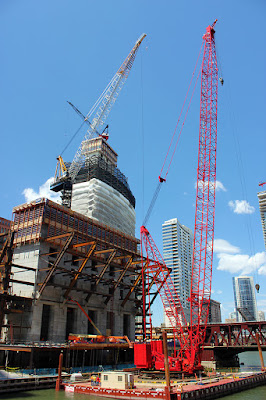 Lifting those columns into place was among the last work of the bright red 300 foot-tall, Manitowoc 888 barge crane that has been floating in the Chicago river just next to the site since this past April.

On Friday, the crane hoisted Truss 8, the  massive 250,000 pound, 30 foot wide by 35 foot tall section into place along the south end of the building, captured on lunch hour by Kngkyle on SkyscraperPage.Com, which has it's own 60 page (and counting) thread on 150 North Riverside, with a lot of spectacular photographs. 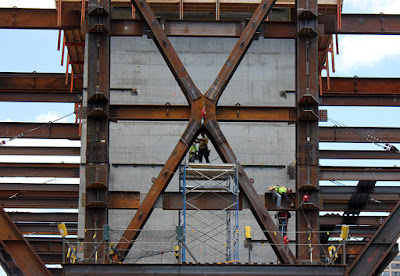 As early as this week, the 888 crane will construct its own replacement, another crane that will lift materials up the tower as it rises, and then it will be deconstructed and floated away. 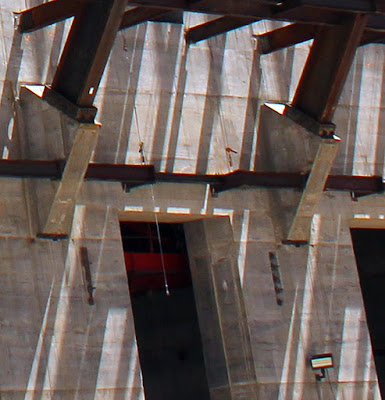 Eventually, as the skeleton is completed and 150 North Riverside grows its homogenous skin, the supporting cage of sloping columns will be hidden behind elegant glass.  For now, however, one of the most spectacular engineering feats in Chicago construction stands naked to your gaze.  For a time, you can see, ungloved, the outstretched fingers on whose tips 47 stories of curtain wall will rest. 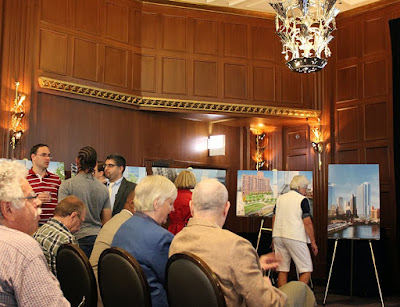 The Art of the Pitch: Selling Goetsch Partner's 150 North Riverside to the Neighbors. 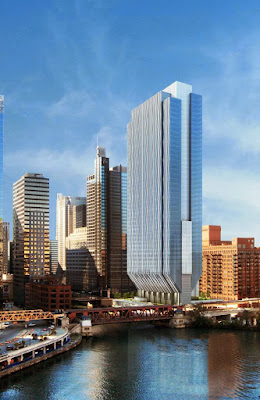 Good article. Thanks. I wondered what that crane was doing. Pretty sweet-looking building, too, IMO

Nice pictures of the project! For the visitors to this website please note the Structural Engineers Association of Illinois will be hosting a dinner meeting on October 6th to discuss this project.
http://www.seaoi.org/2015_October.html

Great pictures! Works in progress are always so interesting to watch - and you're right in that it is, in its own unique way, a piece of beautiful work itself. Thanks for these wonderful pics!