I'm not making this up.

On the morning of March 29th, 1961, only weeks before the Bay of Pigs invasion, Fidel Castro woke up and decided he wanted to play a round of golf.  He had never done this before.  We do not know his handicap.  But he took along Che Guevera - who had once worked as a caddy and had enough experience with the game to beat Castro handily - along with a few other officials to the Colinas de Villareal Golf Club in suburban Havana, before the revolution one of the 1%'s favorite and most exclusive hangouts.

The story goes that Castro and Che were so taken by the site that they decided then and there to transform it into a National Arts School that would not only be the best in Cuba, but the best in the world.  Cuban architect Ricardo Porro was assigned the task of designing it, and he brought in two Italian architects, Roberto Gottardi and Vittorio Garatti, to assist.

Although never fully completed, the resulting complex, the Escuelas Nacionales De Arte (National Art Schools) remains one of the most remarkable works - and most fascinating, cautionary tale - in 20th century architecture.  It was the subject of John A. Loomis's fascinating book, Revolution of Forms: Cuba's Forgotten Art School, which actually helped spread the word of the importance of the project and spur its restoration.

Was the architecture of the National Arts Schools revolutionary or reactionary?  Sensual or decadent? Were the architects heroes of the revolution, or outside agitators for bourgeois values? I wrote about the Schools back in 2010, when they were the subject of a fascinating exhibition at the  Graham Foundation, Felipe Dulzaide: Utopía Posible.  I hope to write more soon.  (I know - add it to the list.) 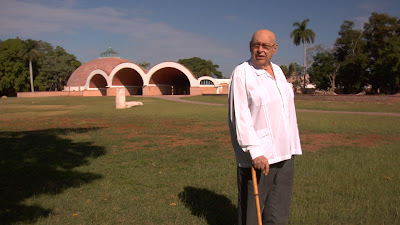 click images for larger view
I did want to give you a heads up, however, that tonight, April 15th, at 7:00 p.m., at the Architecture and Design Film Festival at the Music Box, you have another chance to see a fine documentary on the schools, Unfinished Spaces, which will be followed by a Q and A with director Benjamin Murray. 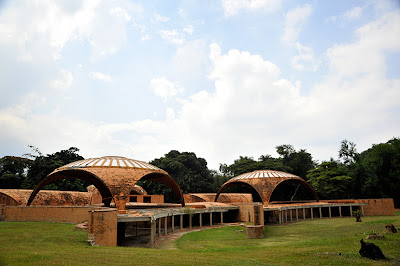 The film takes you into the wonder of the schools, the stories of the architects - all now pushing 90, but still alive and articulate - and includes only recently recovered footage of both the early days of the schools, and of a frail Fidel Castro blaming the decay of the school structures on the bad advice of a key bureaucrat, and proclaiming "A most beautiful history.  Perhaps one of the most beautiful histories.  In the middle of so many obstacles and difficulties . . they killed a beloved young girl - like a first love.  This is how I felt the day when they told me of the sentence of death for the project.  We need to propose to finish the schools --but completely! . .  ." 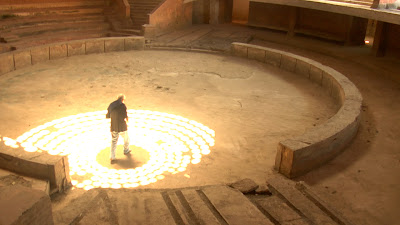