Why Must the Cancer Survivors Garden Go Begging? 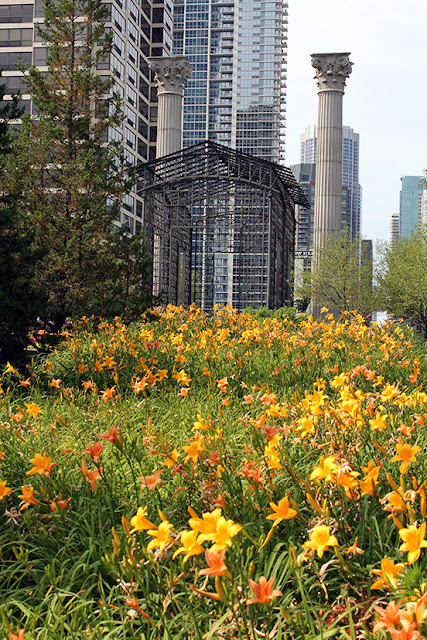 click images for larger view
The Tribune's Mary Schmich had a great article recently on the Chicago Cancer Survivor's Garden, the lovely 2-and-a-half acre setting east of Daley Bicentennial Plaza created in 1996 with a million dollar gift from cancer survivor Richard A. Bloch, co-founder of H&R Block.  The garden's signature visual element is a slice of Chicago history, the stately columns . . . 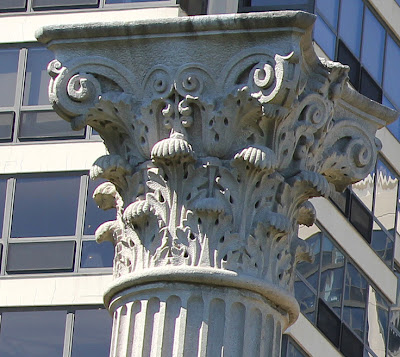 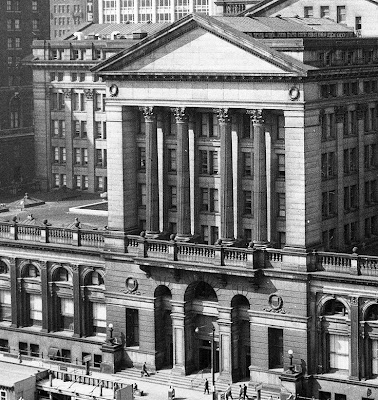 Now, the Cancer Survivor's Garden is facing an uncertain future.  A private donation that has funded the garden's upkeep has run dry, and as Schmich quotes Bob O'Neill, "Who's going to pay?  That's the issue." 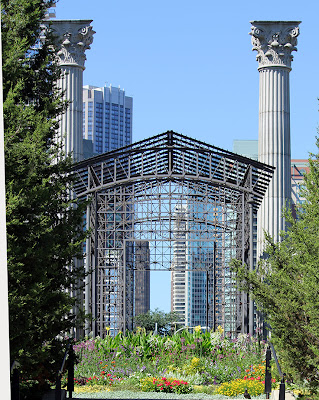 And he almost had me convinced. According to Schmich, "For top-notch planting, repair and maintenance, the summer tab alone is $60,000."  Let's get a committee together.  Put up a Facebook page.  Get the fund-raising going.

Until I started to do some research on the web.  I soon found dozens of pages testifying to the fact that the garden appears to be a very popular place for weddings.  Looking at the pictures, you can understand why.  Then I stumbled across the Chicago Park District's Information and Rates brochure.  It tells me the garden occupies over 13,000 square feet, including all the landscaped areas, and that it can accommodate up 1,400 people, if you don't mind a little a crowding.

And then I came across this:

So, at $3,150 per, how much does the Park District rake in each year from event rentals?   Tell me again, why is there no money to maintain the garden?

Except, of course, when Mayor Rahm Emanuel snaps his fingers, and shakes down corporations for over $37 million to cover the costs of the NATO summit.  The money flows like water.

And it's about to become a gusher.  In 2009, the Ricketts family came up with $845 million to buy the Chicago Cubs.  This year, they're finding, with no apparent strain, well over $125 million to pay their players to uphold a century-old tradition of not winning a World Series and being a pretty sure thing to finish the season in full retreat from the .500 mark.

The Ricketts have money to burn, but they'd rather burn ours, and now the news is that Emanuel is close to agreement on how best to shovel not just tens, but possibly hundreds of millions of dollars of public funds to the Ricketts so they can remodel Wrigley Field.  The technique - the diversion of amusement tax revenues or some other updated TIF scam - has yet to be revealed, but the result is already clear:  another massive slush fund benefiting the super rich and the super powerful, paid for by sapping general revenues that support the staple functions of the city.

To summarize: we must all reach into our pockets and pay again to keep a small gem like the Cancer Survivors Garden which is probably already paying for itself.  So we can subsidize Wrigley Field, so the Ricketts can keep enough loose change in their pockets to pay Alfonso Soriano $17 million a year.

And so it goes in Chicago, the city of sheep.

Do you think we could trade Soriano to the Yankees for a garden, several curators, a battalion of arts teachers,  restored library hours, and a mayor to be named later? 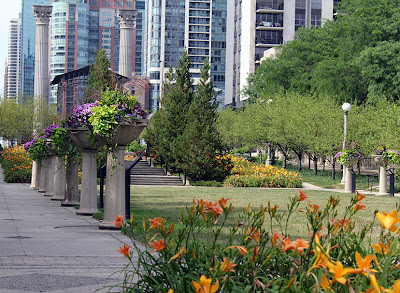 The Bloch Foundation contributed $1,000,000 in 1995 - $700,000 for a Construction Fund, and $300,000 for a Maintenance Endowment. However, the park district has apparently misplaced the record of the Maintenance Fund. The rental funds have also been misplaced. The full 1995 Agreement is available at http://www.neweastside.org/MPtoNavyPier6.html

The garden's design is beautiful, but it is one more example of how many of our public landscapes are unsustainable.

Chicago is Paris on the Prairie, but we're never gonna have the colossal parks budget of our namesake. I'm all for expanding green space in the city, but why not do it in such a way that it requires minimal maintenance? People talk about the health benefits of parks, but all that herbicide isn't doing anybody any favors.