Prentice Hospital:Still Not Dead - but Not for Lack of Trying- Bertrand Goldberg masterwork among Landmarks Illinois Ten Most Endangered 2012 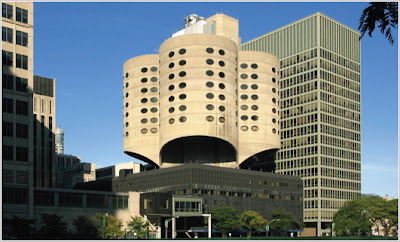 click images for larger view
Landmarks Illinois has just issued the 2012 list of its Ten Most Endangered Historic Places in Illinois, and prominent on the list is Bertrand Goldberg's Prentice Hospital,  which Northwestern University is hell-bent on grinding into dust so it can leave still another massive vacant lot in Streeterville.

It's been almost a year since an official omerta has descended on the battle to save the modernist icon after a Commission on Chicago Landmarks agenda item on Prentice was mysteriously pulled from the June, 2011 agenda.  Private talks were supposed to be going on between the city and Northwestern, but so far, the rest is silence.  The Landmarks Illinois page on Prentice is an excellent compendium of people to write to, links the the resource study that proves, against Northwestern's contentions, that the building has be profitably re-used, as well as to statements from everyone from Helmut Jahn, Ron Krueck, Mark Sexton and Jeanne Gang in support for saving the building.

Perhaps Northwestern can take a page from another of the Ten Most Endangered, the twelve-story Bresee Tower in Danville designed by Mundie and Jensen in 1917.  The current owners are willing "to 'gift' the building to a non-profit. "  A rehab/retrofit would qualify for the usual tax breaks, and the structure is in a TIF district.

Elsewhere on the list are Guyon Hotel on Chicago's west side, Keck and Keck's Blair House in Lake Bluff, and Historic Neighborhood Schools throughout the state.  Check it all out here.