Northwestern University's new Bienen School of Music building had a rough time getting started.   In February, 2008, the university announced a small number of architectural firms, Murphy/Jahn among them, would be invited to compete to design the new building.  In October of that year, Goettsch Partners was selected for the $90 million project, which was to begin construction in late 2009, with a 2012 completion date. 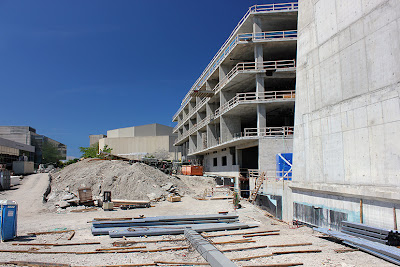 Funding problems, however, intervened, and in November of  2011, the university put the project on “indefinite hold.”  Ironically, that “hold” proved far shorter than the previous delay.  On May 18, 2012, ground was broken on what, by then, had become a $117 million, 152,000 square-foot building shooting for LEED Silver.  (Although the Goettsch site says they're going for the Gold.)  The structure will consolidate Northwestern's music school, renamed to honor former University President Henry Bienen and his wife, Leigh Buchanan Bienen, from three present locations, including the 1874 Second Empire Building, designed by architect Gurdon P. Randall as the Evanston College for Ladies, that is the second oldest structure on campus. 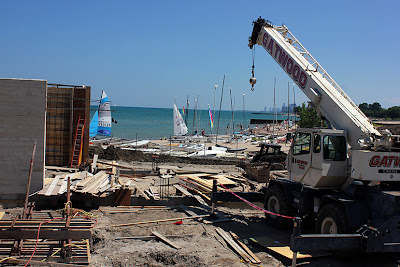 The new building commands a spectacular lakefront site, just north of a beach, with striking views of the Chicago skyline in the distance to the south.  Thorton Tomasetti  is the structural engineer for the project, whose Z-shaped plan consists of what is essentially two buildings, north and south,  joined by a curtained wall, skylit entrance pavilion.  The poured-in-placed concrete of the main pavilions will be faced on the exterior with limestone.  Cantilevered glass will dominate at each end of the complex.
Among the facilities included will be a 150 seat opera rehearsal and 10 classrooms.  The top, fifth floor will be the home to the administrative offices of the School of Communication. 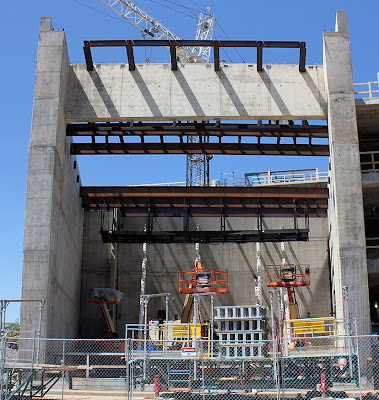 The centerpiece of the complex will be the 400 seat recital hall, named the Galvin Recital Hall after a $6 million, 2013 gift from the Robert W. Galvin Foundation in honor of Mary B. Galvin, a 1945 Northwestern graduate.  Kirkegaard Associates is consulting on acoustical issues, and Schuler Shook on lighting.  The dominant feature of the wood-paneled hall with be a 50-foot cable-supported, double skin window wall offering dramatic views out to Lake Michigan.
To the west, there will be a 120-foot-wide strip of ‘pedestrian-friendly’ landscaping, just east of the scarringly ugly Lakeside Parking deck,  linking to the rest of the university's arts center to the north, including Pick-Stager Hall and the Block Museum.
Current completion date is 2015.  Status updates and a live webcam of the construction site can be found here. 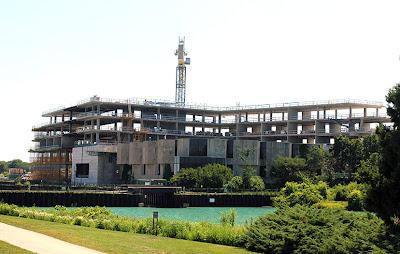 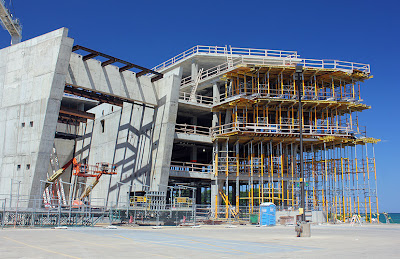 Eyesore on the Lake. Terrible waste of lake front property. NU is a horrible steward of a limited asset.

Hi
I read your post and i appreciate your efforts.The information that you share in the above article is very nice ans useful.All the things that you share with people, are very nice.Thanks for this article.

Anonymous: I went to NU in the '70's when they finished the NEW LAKEFILL built just for the purpose of expansion. That way they could expand w/o tearing down historic properties on the edge of the campus in Evanston. See how that works? Being used for it's original intention, rather than as a place for people who didn't financially contribute to it to walk their dogs.