I was walking the near West Side a couple weeks ago, when I turned a cover and found the Old Cook County Hospital building, shining in the late summer sun. 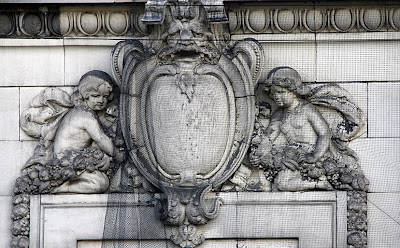 After the facility closed in 2002, it had been the mission of the Strogers, père and fils, to use their position as President of the Cook County Board to demolish this historic, nearly century-old structure, evoking a prolonged outcry from preservationists that wound up with Todd Stroger agreeing to preserve the building and look into re-use alternatives.

Nothing has happened, except that the newer wings behind the hospital have been demolished, leaving a large vacant lot open for development.   In late 2003, Landmarks Illinois issued a $75 million re-use plan created by board member Joe Antunovich and McCaffery Interests to convert the hospital into offices and housing for nurses.

Again nothing happened.  In 2005, County Board Republicans battled against a $1.4 million no-bid contract to develop a re-use plan.

In 2007, the county's Office of Capital Planning and Policy issued a $140 million plan to convert the hospital to offices.  The proposal was referred to committee to die a quiet death.

In 2009, a re-use report was issued from Jones Lang LaSalle that essentially said that there was no demand for using the building as a commercial office building, a hotel, dorm, school or rental or senior housing, and again recommended renovating the building as offices for the County's health system. In March of 2010, the County Board voted 17-0 to approve an $108 million adaptive reuse plan, with a projected completion by 2012. 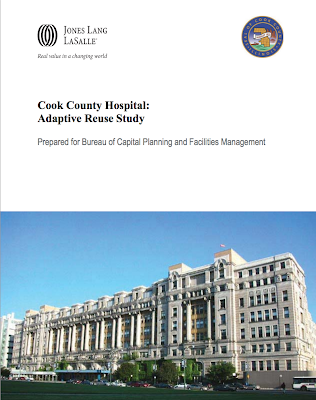 In 2011, new County Board President Toni Preckwinkle unveiled a $126 campus redevelopment plan that called, again, for converting at least part of the old hospital into administrative offices.

Nothing happened.  Two years later, even the graffiti is getting old. 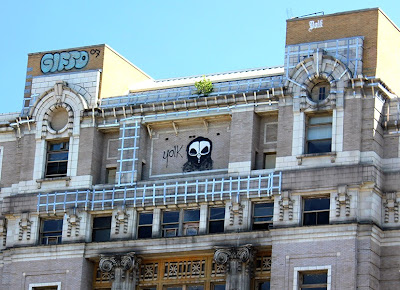 This past  May, WGN's Nancy Loo did an update report, including an interview Landmarks Illinois President Bonnie McDonald..  I had originally embedded the video in this post, but since it had the annoying habit of auto-starting every time you loaded my blog, I removed it.  You can see the video here.

In the report, Toni Preckwinkle had this to say . . .


We've made a substantial investment over time just to preserve the building.  Now we have to decide whether it merits renovation.

My inclination is always towards preservation.  However, you know, if it costs twice as much to preserve the building as it would to build a new facility that would meet some of our needs on the campus then it doesn't make sense.

While the price for the U.S. Equities report in 2005 was $1.4 million, in 2012 Preckwinkle proposed paying U.S. Equities $9.8 million for a plan covering all county real estate.  Loo has reported it would be released in the next couple months.  Four months later, it still has not.   This afternoon, the office of Cook County Commissioner Larry Suffredin emailed me, “I expect the report soon but have no specific date.” There are concerns that such reports often are written to support conclusions previously arrived at, behind closed doors. 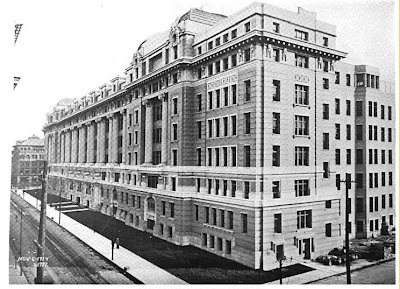 When it was completed in 1915, Cook County Hospital was a grand civic statement. According to a history completed by the National Parks Service at the time the hospital was being named to the National Register of Historic Places, the original cost of the building was $3 million.  The design began under the politically well-connected county architect Paul Gerhardt, Sr., who put the project out to bid at a budget far lower than what he knew the eventual cost would be.  When this came to light, Gerhardt was fired, and the project completed by Richard Schmidt.  The Construction News said his appointment as the new county architect “meets with the approval of many people including those of his own profession . . . Mr Schmidt is not a politician,” adding that Schmidt was “a graduate of Chicago Public schools” and MIT.

Originally intended to be ten stories high, it would up being only eight. 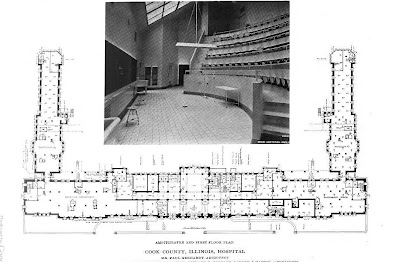 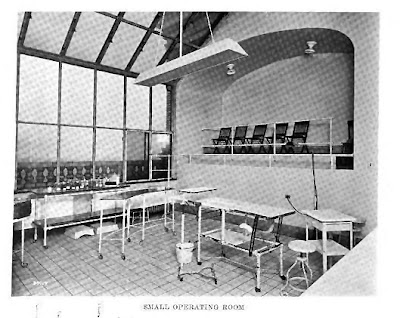 When opened, Cook County had room for 650 patients and 71 interns.  The building stretches along Harrison Street for over 549 feet.  The operating rooms spread across the top, eighth floor, in an area of 31,000 square feet.  Observers were led to the galleries via stairways that kept them entirely separated from the operating rooms themselves.

The steel frame's widely spaced columns were from 18 to 22 feet apart, creating a very open floorpan.  The facades were made of granite, Kittanning brick, and a wealth of terra cotta in the form of imitation granite, as trim, and ornament, and in mansard roofs of green glazed terra cotta. 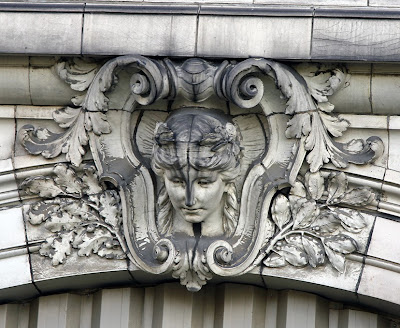 Restoring the facade would have to be focus of any renovation.  The interior, itself, would be a gut rehab but, as Landmarks Illinois President Bonnie McDonald told WGN's Loo,  “This building is utterly usable. It has many uses because each floorplate you see behind me, each of these floors has about 50,000 square feet that could be used.”  According to the National Trust report, some of the operating rooms are still largely intact.  There are WPA murals, and sculpture.  Perhaps they could be part of a museum within the otherwise completely renovated floors. 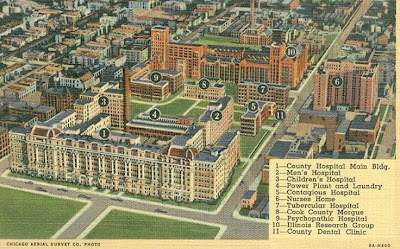 The West Side medical campus is an architectural hodgepodge of buildings - constructed at different times, in different styles, and of wildly varying quality - often battered and abused down through the decades both by neglect and ham-fisted alterations.

Whatever its other, numerous virtues, Loebl Schlossman and Hackl's 2002 John H, Stroger Jr Hospital is a hulking fortress whose bunkered exterior perfectly expresses a 21st Century Supply Chain dystopia in which the big box retail warehouse is the underlying template for all design.  Stroger's front side . . . 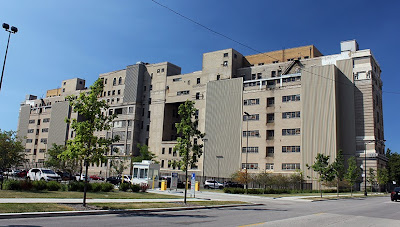 Cook County Hospital, in contrast,  represents a far more optimistic time.  It's design may have looked backward, but its grand Beaux-Arts facade was a way of bringing the high classicism previously reserved to European royalty into the modern public realm.  It expressed the idea that even the poor deserved a part of the American dream.  In its earliest decades, so many hopeful immigrants passed through its doors that Cook County was sometimes referred to as “Chicago's Statue of Liberty.” 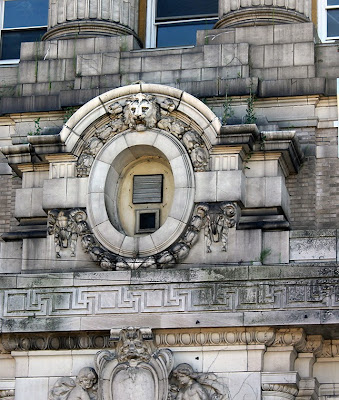 After all political fights, all the money and effort spent on studies and more studies - I can't help thinking that their combined cost would have gone a very long way to funding a restoration - and all the money it would take to demolish it, to lose Cook County Hospital at this point would not only be a great civic failure, it would be a proclamation of surrender of the kind of proud, confident vision that supports Chicago's claim to be a global city. 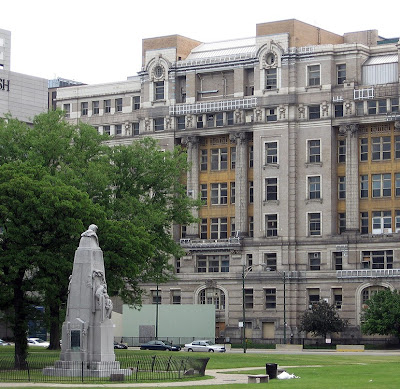 On a sunny day, even in its current decrepit state, Cook County Hospital still gleams.  Set off behind the great open park with its monument to Louis Pasteur (and heliport), its the grand backdrop consigned to storage. Sadly, slowly crumbling, it waits to be called back to role it knows so well, as the visual marker that stitches the medical center into the broader cityscape, and Chicago's proud past to its re-energizing future. 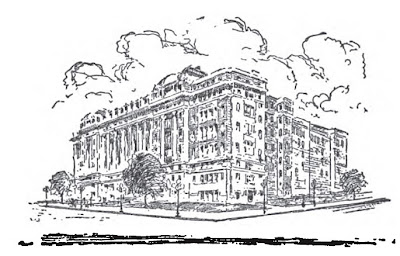 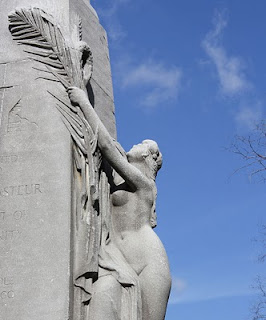 For the record, the National Register nomination was written by me at the direction of my then-employer, Cook County Commissioner Mike Quigley--not the National Park Service. Mike and I felt that listing the hospital on the National Register might help break the logjam on the County Board and shift momentum in favor of preserving the building. I think we had some effect--county administration reversed its pro-demolition position in favor of preservation soon thereafter--but it is of course disappointing that little has been accomplished since then.

How can you put a price tag on history? With our government willing to spend trillions of tax payers dollars to fight oil wars over seas. Why can't they spend trillions of dollars on re-investing in its citizens. Take historic buildings like CCH and turn it into a school?

I'm actually working construction on the eighth floor as of today and observed the two operating rooms you have pictured above!