Alderman Reilly put the brakes to the Realtors, plus What's Up with that Shear Wall at the new Hilton Garden Inn?

The Billy Goat Tavern and Benito Juárez can rest easy, at least for a while.  According to 42nd ward alderman Brendan Reilly, the bulldozers won't be coming anytime soon to the National Association of Realtors Building just north of the Wrigley Building on.Michigan Avenue.

“As far as I'm concerned, the project that was described in the paper last week is not real.  I have not reviewed any materials related to massing, design, traffic - any of it.  In fact the first I heard about a Realtor Building demolition was when I read about it in the newspapers.  So if the local alderman's not aware of all these grand plans, it isn't real.  Unfortunately, when leaks like that occur, it scares a lot of people, [Billy Goat owner] Sam Sianis down in the base - a lot of people care about the Plaza of the Americas, especially me, because I'm the one who compelled the Realtors to repair it on their dime.”
Reilly, responding last night to a Chicago Tribune article last week on the Realtors plans for a one-to-two million square foot tower on their site, clarified the situation with the Avenue of Americas plaza, anchored by the statue of Benito Juárez, that separates the Realtors building from the Wrigley annex.

“It's not for them to tear down.  Those are all city easements under there.  And by the way, I would never let them take away the Plaza of the Americas.  It's a very important plaza to a lot of people in Chicago.  So whatever plans they want to develop, I'm all ears, but they have not come in to share with me .”

“They have a lot of work to do before they can come in and see me, pitch me on a proposal, but whatever they come up with, whether it involves taking that building down or not, it's going to be subject to a very rigorous public process, and it will be open to the public.  This will be a very deliberative process, so nothing's going to get done in the middle of night over there. ”

As we near the 50th anniversary of the assassination of John F. Kennedy this Friday, another historic factor of the current building came to light in a column by the Sun-Times' Neil Steinberg.  In 1963, the Realtors building, then the Apollo Savings building, was the headquarters of the broadcast division of United Press International, and it was where the bulletins on the breaking news of the death of the president went out to the world.

Reilly spoke at a meeting he sponsored last night at Harry Weese's 17th Church of Christ Scientist at which plans for a new 25-story Hilton Garden Inn on a small vacant lot next to the church were presented to the community for comments.

Project architect David Ervin of G/R/E/C architects explained that there are no windows along the western facade of the hotel because, according to Chicago's building code, they would require a 12-foot setback that would take up a quarter of the tight, 48-foot wide site.  Instead, the facing of wall behind 17th Church will be what, according to Ervin,


. . . could best be described as a mosaic of metal panel.  There's five tones of metal panel.  What we did is we worked with a photograph of the Chicago river with a kind of of light reflectance on the river itself .  We digitized that photograph so [the panels] are acting as pixels.  The further away you get , the more you might perceive the idea of light reflecting on water.  We thought it was a really nice way to handle this facade, which though it doesn't have any windows, has a very, very prominent building to the west of it.  We wanted to frame that building .  We wanted to make the composition of the church building and our building one actually working with the other.  So we think that by going from the darker to the lighter tones we  create a frame for the church building.

Ervin assured the audience that the wall of panels of aluminum with a baked-on finish wouldn't create the kind of death-ray metal facades that have lately been in the news for burning up cars and gardens in London and Dallas. 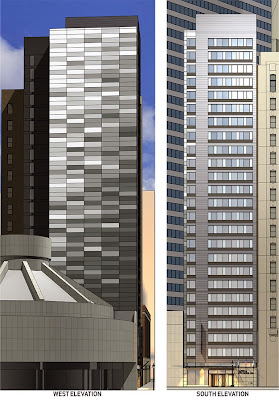 Our intent was not to have a reflecting building in that sense in any way, shape or form.  It's not going to be a mirror reflectance.  We're going for matte finish tones.  Inherently, it will has some reflectivity, of course, but it's going to be what I would a low level, lower than than the glass.  The glass will actually have a higher reflectivity.  The panels will be selected to be not highly reflective, so we're not creating any glare. 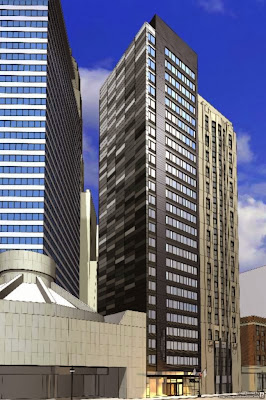 The building will offer 24 floors with guest rooms facing to the north and south, above a lobby floor and two levels beneath. 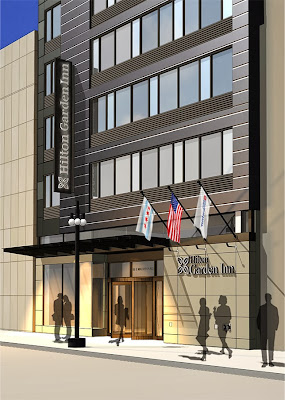 The building base is clad in limestone.  We selected limestone because it seems very compatible with both neighbors , with the Chicago Motor Club and the travertine of this building. [17th Church]  It's not a very wide facade.  It's only 48 feet, so we have a very modest steel and glass entry canopy.  The real elements of collaboration are the signage.   We originally presented the kind of Hilton Garden Inn standard signage .  It was suggested to us that we kind of make it a little bit more compelling than what you might see on a normal HGI.  We developed a smaller but richer kind of steel on aluminum back-lit [vertical] sign and then a metal sign [on the front] the building.  That's the extent of the signage.  Nothing up high on the building, which would be prevented by ordinance anyway.

There are no parking spaces for guest.  Hotel planners expect about 40 valet vehicles on an average night for the 191 rooms.  The building would rise next to the landmark Chicago Motor Building, which is also slated for re-use as a hotel.  The two buildings would share a 5-space valet parking space and the small airspace gap between the buildings would be filled by an expansion joint to keep out moisture.  The back-alley northern facade of the building would be covered in charcoal-colored stucco finish, “basically dark gray tones to allow this [west] facade to pop.” 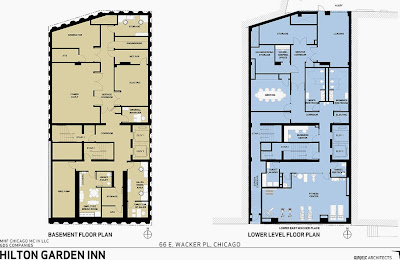 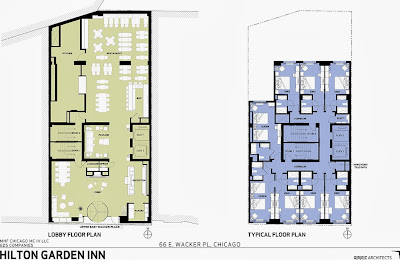 Lobby and guest floor floor plans.  Note that the only window on the west side of the building (to the left on the drawing is the small one at the back where the building has a setback that meets the 12-foot fire code requirement. 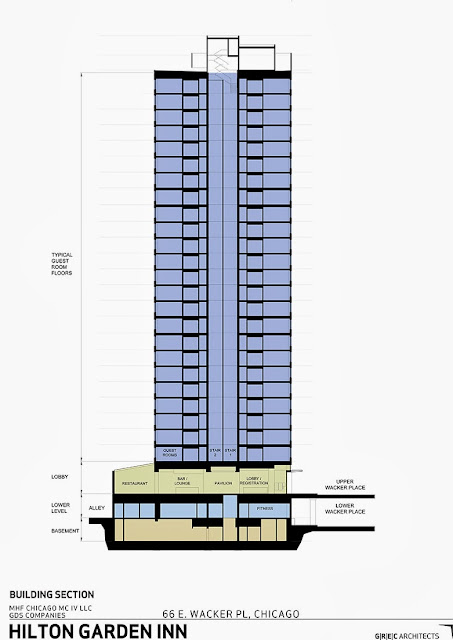 If all goes according plan, construction - with Walsh the contractor - will begin soon, with a best-case opening in spring of 2015. 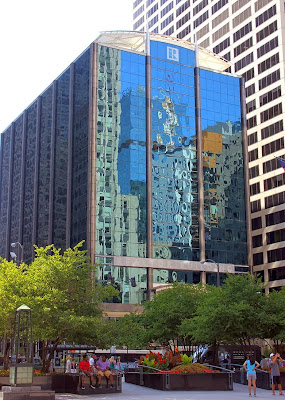 The Realtors Dream of a New Skyscraper 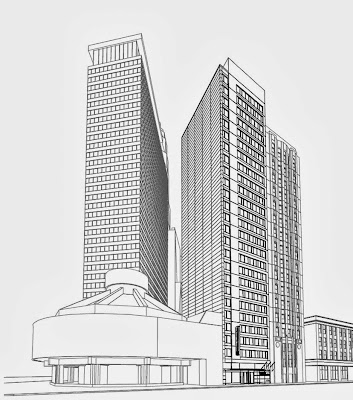 Windows?  We Don't Need No Stinkin' Windows at the Hilton Garden Inn

The developers can buy a 12' perpetual light and vent easement from the church to provide windows on the West side. I think It would behoove them to at least explore the idea.

I think the city ought to consider blowing off its setback requirement in this instance.

A nice set of window (and balconies!) would be a civic asset. I say this, as places like that a pedestrian can look up at and imagine what a great place that would be - even if said pedestrian might never even have a chance at renting a fancy hotel room - provide a small place for the peoples' imaginations to play. And that enlivens a street.