2013 has been the year that brought Chicago sculptor, designer and architect Alfonso Iannelli out of the shadows, with both a major exhibition at the Cultural Center curated by Tim Samuelson, and a lavishly illustrated monograph by David Jameson, Alfonso Iannelli: Modern by Design.

Now, there's only only this Saturday to help a Kickstarter campaign to restore Iannelli's monument to Georgia Guard make its $15,000 goal.  Iannelli created the memorial in 1927 in Park Ridge's Town of Maine Cemetery for the child of a close friend. The plot is also Iannelli's own final unmarked resting place.
Ultimately, the larger plan includes creating a marker for Iannelli.  For now, the Kickstarter campaign, administered through Preservation Chicago, hopes to begin to restore the cast-concrete monument to Georgia Guard, which, having reached the end of its own natural life, has weathered to the point of near collapse.

The Kickstarter campaign must reach its $15,000 goal by 11:00 a.m. EST, this Saturday, November 23rd, or the funding will be lost.  You can read more and contribute here. 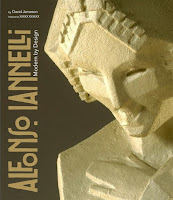 Creation and the Politics of Gender:  Modernism's Messengers - the Art of Alfonso and Margaret Iannelli.