The Realtors Dream of a New Skyscraper, as Billy Goat's, Benito Jaurez and his plaza Contemplate their Future

The Trib's Mary Ellen Podmolik reported late Monday that the National Association of Realtors has plans to demolish their building at 430 North Michigan and trade up its 218,000 square feet for a 1 to 2 million square-foot skyscraper, further sealing the canyonization of Michigan Avenue.

The 11-story 430 North Michigan was designed by architect Fred H. Prather and opened in 1963 as the home to Apollo Savings and Loan, which collapsed in 1968.   The building gained national  notoriety as the home to fictional therapist Bob Newhart, immortalized in the sitcom's opening.

The demolition of 430 North Michigan will take a lot of Chicago history with it.  Not the building itself.  It was never landmark quality, and while it was originally an expression of mid-century modernism,  in 2008 it got a glitzy refacing and sprouted wings at the roof.  In 2011, however, the Wrigley Company sold the Realtors the building behind 430 that beginning in 1934 was Riccardo's, the city's premier bar for newspaper folk, complete with murals by Ivan Albright.  By the 1970's, Riccardo's began a long descent, and the building survives today as a restaurant named after its address, 437 Rush. 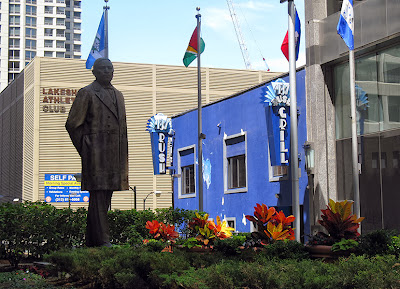 But then there's the Billy Goat Tavern, another newsman's hangout frequented by the likes of Studs Terkel and Mike Royko.  With an entrance just west of lower Michigan Avenue, it's called the basement of 430 home for half a century, and will also be be evicted, if only temporarily. 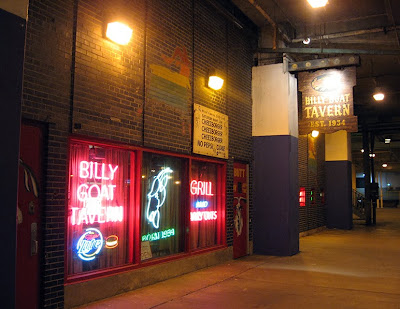 Of far more concern is the status of the Plaza of the Americas, which sits on a raised viaduct that stretches back from Michigan Avenue between the Realtors Building to the north and the Wrigley Building Annex to the south. 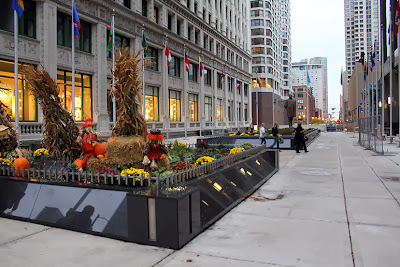 In 2010, the depressingly derelict plaza underwent a renovation.  The good news was the $750,000 cost was picked up by the realtors.  The bad news, as the Trib's Blair Kamin noted, was that it was a hack job, done without the participation of an architect or landscape architect.  Unlike the original design of the plaza, there are no benches or seating inviting pedestrians to linger.  The clear message is “look, but keep moving.”

The larger question is why the National Association of Realtors picked up the tab.  In negotiations with 42nd ward alderman Brendan Reilly, it came to light that the the Association was “legally responsible for maintenance of the Plaza.” Does this mean they own it?  And if they do own it, will it be usurped in whole or in part by the new building?  Podmolik's report only says that the new development will include “building and plaza space.”

Right now, there's a shortage of details.  The entire announcement is slightly vaporous.  No architect has been named, no groundbreaking date set. Podmolik reported that the Association's spokesman would only say “many details need to be worked out and that no decisions are final.”   The Realtors could be trolling for financing that may never come.

If it does, however, we need to make sure that the Plaza of the Americas is not only not lost or abridged, but that Julian Martinez's sculpture of Benito Jaurez looks down on a plaza that is finally worthy both of Mexico's first President and of the site's pivotal location. 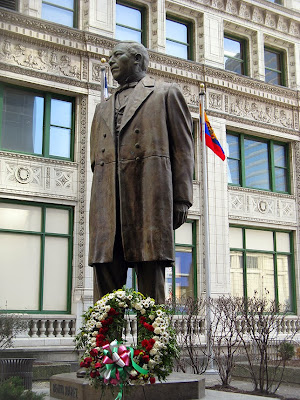 Thanks for the article! I always thought this statue of Benito Juarez was super cool and wondered why it was tucked away in this forgotten little corner.

I really like the skyscrapers that have lots of windows! I think they help make the city look prettier because they sparkle. Who doesn't love looking at the huge skyscrapers in the city? It makes you feel so small. http://www.melissaslistings.com/aboutus.php

The building was also the home of the United Press International National Broadcast News Department and UPI's Chicago bureau. It was from there that the broadcast news desk sent the news of President Kennedy's assassination, on Nov. 22, 1963, to its client radio and television stations throughout the United States.