What's red and blue and on a mezzanine? CTA's new Division and LaSalle entrance debuts

If you encounter it in the just the right place, you might feel you've fallen into the blood elevator scene from Stanley Kubrick's The Shining. The crisp red tiles of the new entrance mezzanine at Division and LaSalle - the first anywhere along the Red Line subway since it's opening seventy years ago - just have a way of burning their way into your retina, a strong navigational focus point that leads you to the escalator, stairs, and elevator to and from the platform.

The station's original entrance at Clark and Division is now temporarily closed as it also undergoes a major rehab for the first time since its opening in 1943.  Back then, it was more of a workaday neighborhood.  According to the station's history on the essential Chicago-L.org, there was even a direct mezzanine-level entry to the Mark Twain Hotel(!). As the surrounding neighborhood first sank and then went more and more upscale, the original crisp design of the station became increasingly derelict, leading Tribune transportation report Jon Hilkevitch to label it “among the tackiest and most dilapidated on the CTA system.”

A 1999 plan had a $15 million price tag, but the time the issue was revisited a few years later, the budget had exploded to $102.5 million.  A new design was completed in 2011, but $30 million in funds earmarked for Clark and Division were diverted to cover the $67 million cost of rehabbing the Red L stop at Grand. By the time the project was relaunched in 2012, the cost was cut almost in half, to $50.6 million, largely by not trying to keep streets open during construction, but shutting down Division for a year, simplifying the construction staging. 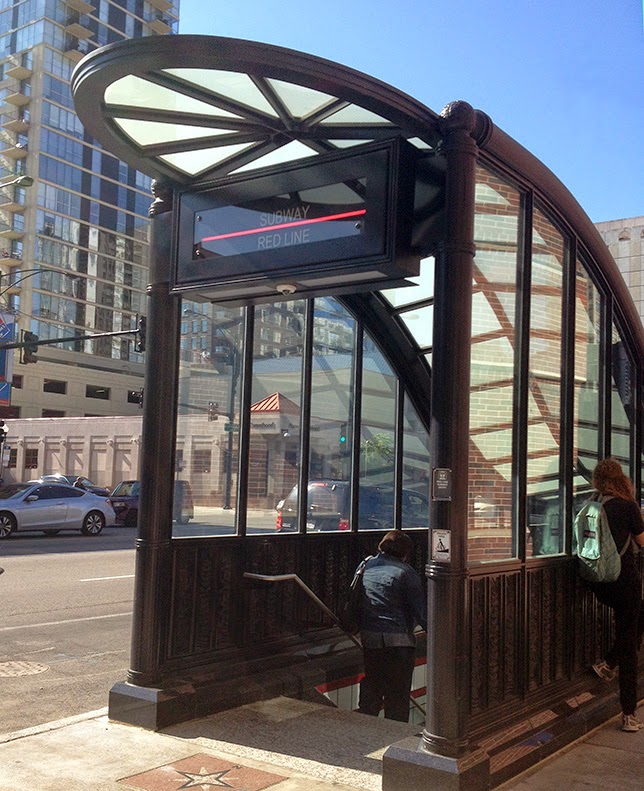 The new 8,800 square-foot mezzanine at Division and LaSalle actually opened two months ahead of schedule, at the end of June.  The worst part of it are those truly abominable giant sea slug street entrances to which the CTA seems addicted.    Lumbering, over-scaled, thick limbed and graceless, anything farther from the classic, spare elegance of Chicago design would be hard to imagine  At least on the northeast corner, there's the lightness of the Richard Haas to provide an ameliorating backdrop. 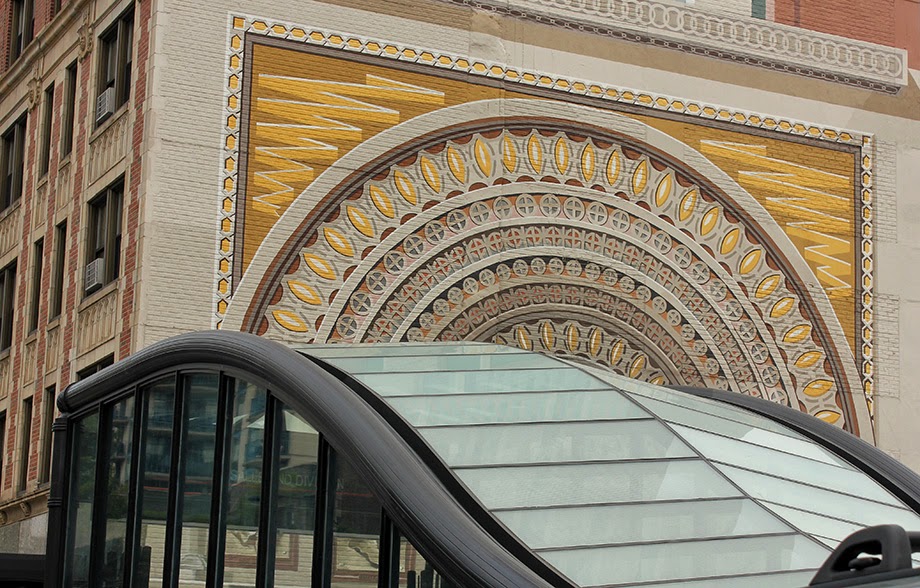 The mezzanine itself follows the new standard of being capacious and bright, with a light-reflective metal ceiling, and those now ubiquitous light-blue tiles with slightly darker tiles depicting a could-be-anywhere skyline.  (For this kind of money, couldn't we afford something less generic?) 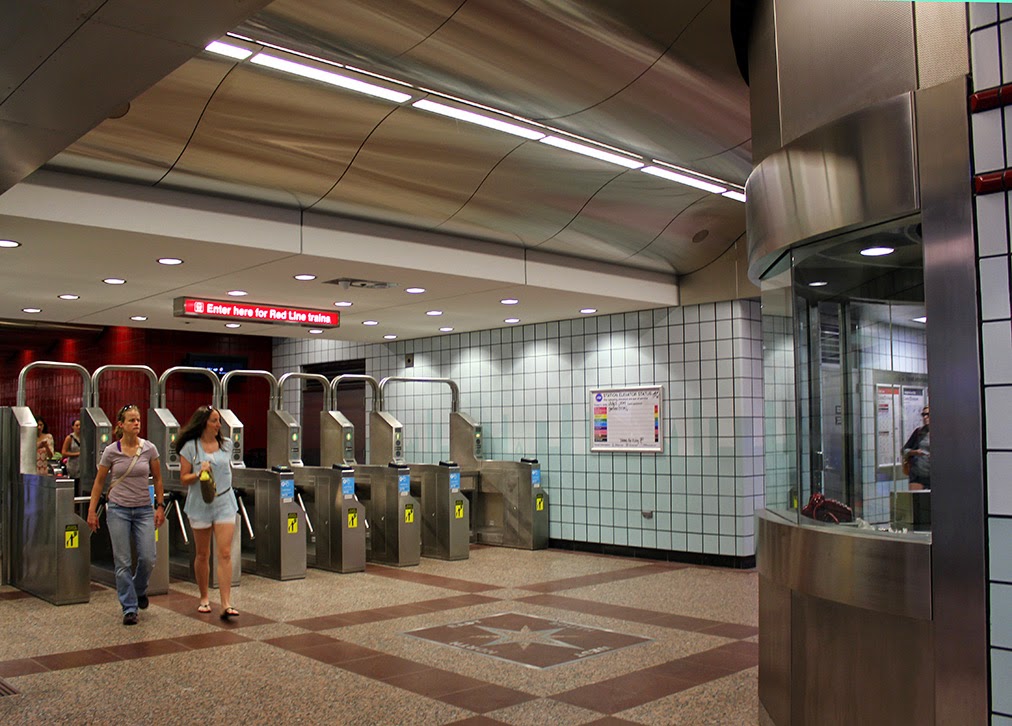 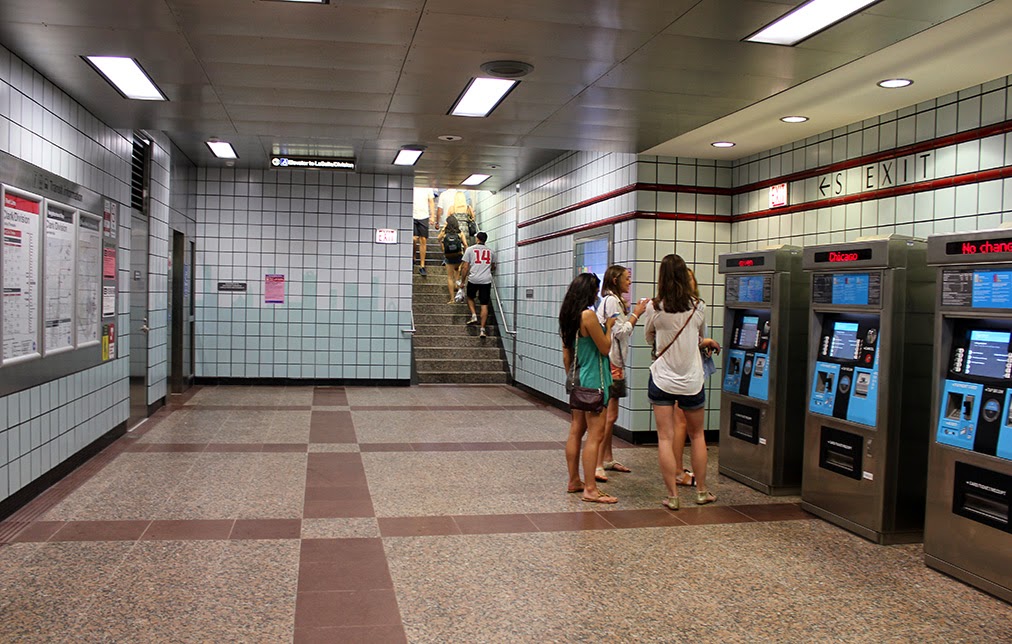 There are escalators and an elevator, which no doubt were cheaper to build here, than trying to insert them into the existing entrance at Clark Street. 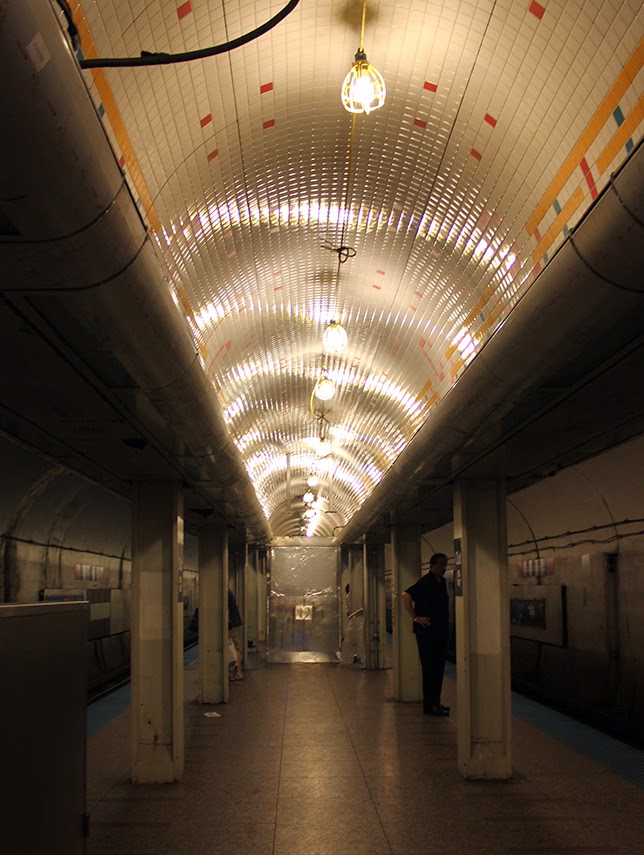 At platform level, the previous concrete vaults are given the mosaic treatment to make the space seems appear brighter and more welcoming. 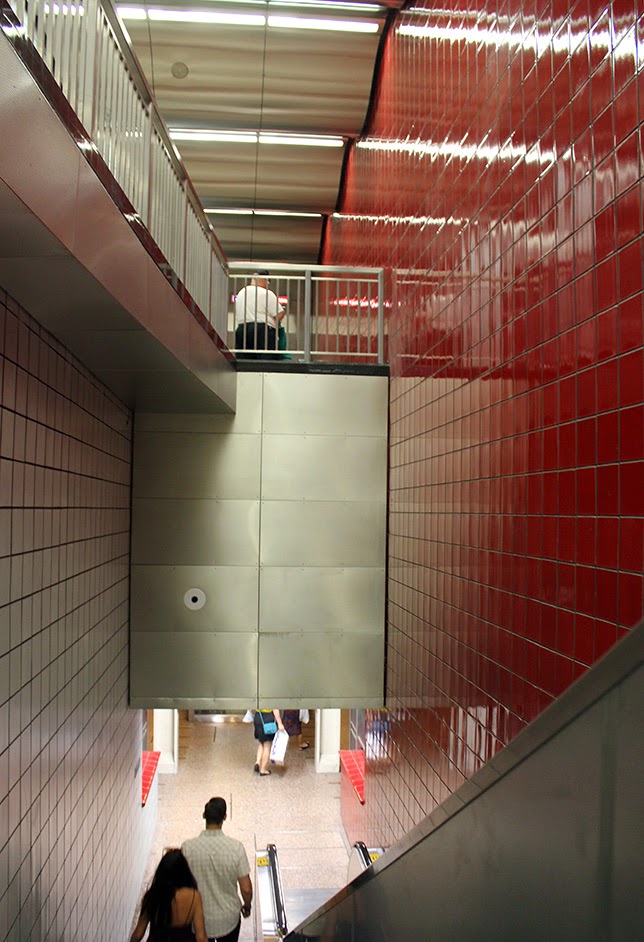 The original and rehabbed and expanded station are both expressions of their respective times.  The 1940's stations were compact and utilitarian, but with a definite Moderne vibe that was allowed to tarnish and submerge under decades of neglect and hacked revisions.  Platforms, also, were spare, unashamed bare concrete outer walls of the tube or the long perimeter of steel columns that kept the whole thing standing.  Seventy years ago in Chicago, the very idea of a subway was a novelty and the frank design an object of delight, tying together the subway to the great retailers of State Street with dedicated mezzanine-level entrances.   In the midst of a time of war, an austere decor didn't really qualify as a privation. 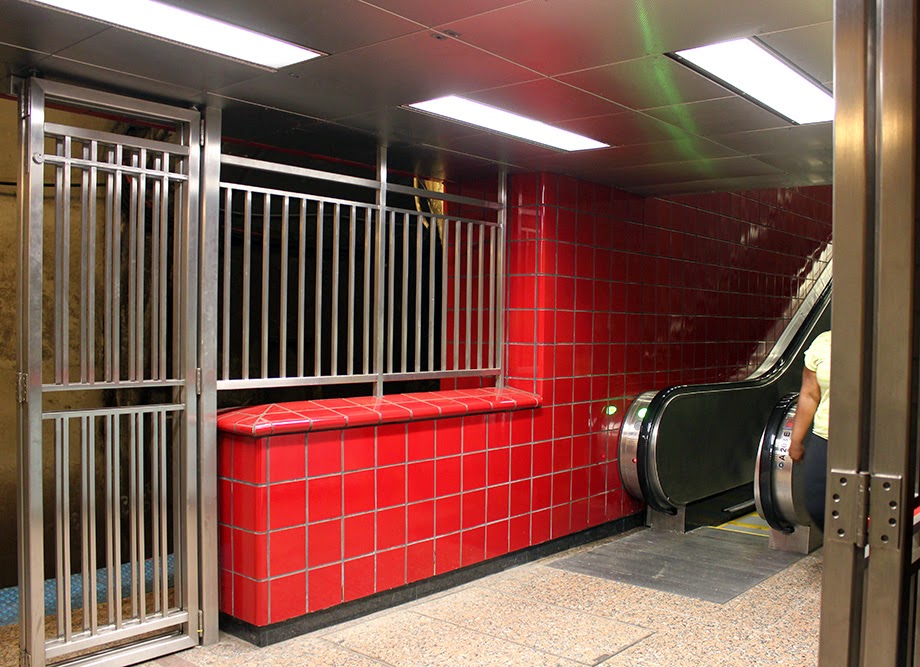 Today, in contrast, we require everything to be flooded with light, surfaces bright, and spaces large. Where once red painted concrete was sufficient, we now have granite; spare concrete vaults are now covered in mosaic.   You only have to look at one of surviving L stations - such as at Chicago or Fullerton - to see how a commuter load as large - or larger - than today could be accomodated in tight, functional spaces that even had room for restrooms and a newsstand.
Today, we demand more, and the Clark and LaSalle mezzanine provides a sharp, attractive upgrade.