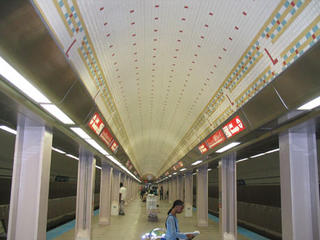 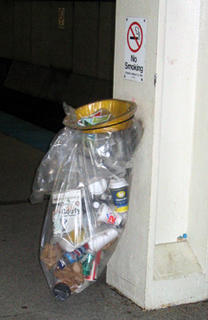 It cost $15,000,000, but the Skidmore, Owings & Merrill redesigned Lake Street station on the CTA's Red Line is money well spent. When its nearly empty, there's something almost temple-like in the brilliantly lit platform with its procession of white columns and uninterrupted, block-long mosaic vault. At rush hour, when crammed trains disgorge horde and after horde of rushing, intent passengers, it's got the popping, romantic energy of a Gershwin rhapsody.

Step south of Randolph, however, and you're suddenly plunged into the scene from Beethoven's Fidelio where the prisoners are forced back down into the dungeon. Have platforms like the one at Washington ever seemed more dark and decrepit? At one section, five successive fixtures lighting the track are out of order, plunging the station into a gloom so deep that even the rats take Prozac. You would think the most logical priority would be to bring all Loop line stations up to standard as quickly as possible. But, as reported by Greg Hinz in Crain's Chicago Business, the agency is hell-bent to shift $42 million in city TIF money and $130,000,000 in CTA bonds to construct a "superstation" under the chimera known as Block 37 to serve a $500,000,000 express service to the city's airports that the CTA's own consultant has estimated will carry a grand total of about 6,000 passengers a day.

Meanwhile, back at the Washington Red Line station, the CTA has now apparently decided to rub the noses of riders in its indifference by treating discarded garbage as a new form of public art. Old trash receptacles have been replaced with transparent bags hanging listlessly off of metal rings. To commuters who happen to be anthropologists, these let-it-all-hang-out exhibitions of trash both mundane and disgusting may be objects of endless fascination (quick tip: the lighting of the refuse is better at Clark and Lake), but for the rest of us, it makes waiting for a train a little like visiting a landfill.

The CTA has so far declined to respond to questions about why the bags exist. If they're thinking it's a security measure, we're all doomed. Bad guys could easily make a nasty parcel inconspicious simply by wrapping it in a newspaper. Right next to the bags are big newspaper recycling boxes whose contents are completely shielded from view. Morever, it's only at certain stations that we're being given the honor of contemplating our own refuse. But it's pointless to speculate. The mind of a bureaucrat insistently remains a thing of mystery. Let's just hope the CTA takes aside whoever thought this was a great idea and sends them out for counseling.