A9 Blockview beta Offers Interesting - and Erratic - Look of Cityscape 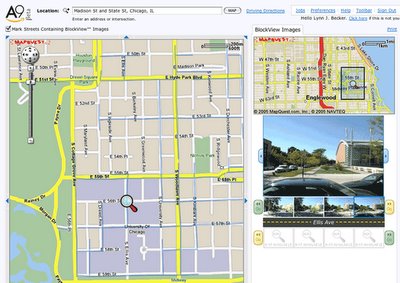 Probably just about everyone is familiar by now with Google Maps, which allows you to find any location in the United States, zoom down to street level, and place underneath a continuous satellite photograph of the terrain. Now the search engine A9's A9 Maps has Blockview, a beta map program that includes street-level photos of the that same terrain. (Someone has actually figured out how to bring this info into Google maps, but that's another story.)

It's really designed as a tie-in to its local listings, to show "street views of millions of business and their surroundings. Using trucks equipped with digital cameras, global positioning system (GPS) receivers, and proprietary software and hardware, A9.com drove tens of thousands of miles capturing images and matching them with businesses and the way they look from the street." The process appears to be highly automated, and the results are highly variable - you get pictures of vacant lots, and passing shots where it's often hard to figure out what you're actually looking at.

More to the point, the coverage is highly selective. (You can click the checkbox "Mark Streets Containing BlockView™ Images " and all the covered streets are marked in blue.) As might be expected, pretty much all the streets in the Loop and its environs are covered, but Millennium Park is not. Once you get outside of the Loop, it's pretty hard to figure out the logic behind the selection. There are multiple shots of Rafael Vinoly's new Graduate School of Business on the University of Chicago campus, but there's not a shot to be found of Frank Lloyd Wright's Robie House, just across the street. If you luck out, you may actually find a good photograph of what you're looking for, but for now A9 Blockview is more a curiosity and a crapshoot than a reliable resource. Since it's currently a beta, however, it's easy to imagine how Blockview - or something like it - could evolve into something quite useful.

I used that feature at work the other day to determine the extent of a particular storefront, instead of going there...which might have been just as easy because the block would switch sides and then reverse at just the point where I needed to see things. In another area three "frames" were blocked by a CTA bus.

I agree, it's got some bugs to work out but it's kinda handy, for more than its intended yellow pages application.