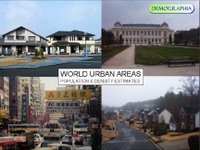 Demographia has issued a new report World Urban Areas, Population and Density, (Adobe Acrobat format) ranking the world's 1,117 cities with 500,000 or more people on the basis of population density. Demographia is one of the websites of Wendell Cox, whose work is often published by the Heartland Institute, a right-wing think tank that wraps itself in a mantle of libertarianism to advance the interests of large corporations. Similarly, Demographia is pro roads, anti mass transit, anti smart growth, and pro sprawl, which is apparently what its new survey is intended to support - its two graphs illustrate a positive relationship between low density and high incomes.

The premise is highly contestable - does the relationship represent a cause or a result? Read more about it here.

It's an absurd premise; any comparison between Lagos and Zurich should be laughed out of town. Within the USA, though, the wealthiest cities (Boston, New York, San Francisco) are denser than poorer cities like Miami or Phoenix. Much of this has to do with the economies of said cities: as it has for millennia, density still helps agglomeration economies generate new ideas and capital.