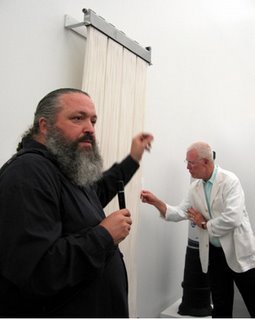 of June. And while a spokesperson for Bruce Mau Design says a personal move is not finalized, Knelman says Mau has told friends he's been shopping for a Chicago house and checking out schools for his three children.

Why Chicago? An increasing amount of Mau's business is in the United States, and Knelman reports a number of those clients don't like having to cross the border to meet with him in Toronto, an annoyance that will only increase now that the U.S. State Department is requiring passports even for trips to and from Canada.

The other major reason stated is that Chicago, from the mayor on down, "embraced" Mau's manifesto exhibition, Massive Change, when it ran at the Museum of Contemporary Art last fall, while, according to Knelman, the response to show in Mau's home town was more reserved. If Mau is expecting the type of fawning he received here to continue in perpetuity, he'll be in for rude awakening. Chicago, ultimately, is a tough town, with an allergy for puffery no matter how well intentioned. Massive Change was Mau's Chicago romantic courtship. Moving here will be the marriage, when you find, usually through a painful period of adjustment, that your spouse is not just a reflection of yourself, but a separate person with his or her own obstinate and not always subservient traits, habits and opinions.

Still, Chicago was built by people who grew tired of where they came from and fell in love with the city, in all its contradictions. Think Sullivan, Mies, Daniel Burnham. If Mau can disenthrall himself from the flatterers - sycophancy is one of Chicago's baser failings - and really engage the city, warts and all, he could be the next name in that line.

Yes, that is, who we need in Chicago. Man with a vision, who can merge the old and the new. The old comes from www.mansionmasters.com as architectural ware in wrought iron, antique bronze, modern glass.