Urbanlab Wins City of the Future 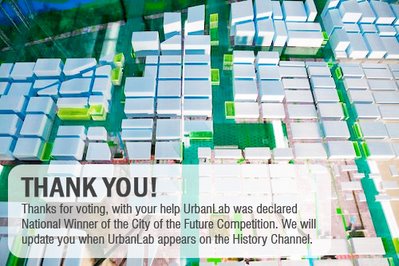 The History Channel announced this morning that the Chicago firm Urbanlab has won the $10,000 first prize in the The City of the Future Competition for their vision of Chicago in 2106. The firm had already won $10,000 for winning the Chicago leg of competition, and now wins an additional $10,000 for beating out entries from similar competitions in New York and Los Angeles. The winner was selected by the public via the City of the Future website.

The award was announced by architect Daniel Libeskind, who served as "national competition juror." "UrbanLab is thrilled to have been named the National Winner of the City of the Future competition," said the firm's Martin Felsen, "especially considering the high caliber of ideas and proposals generated by the competition participants. We’d like to thank The History Channel for providing such an important forum, at a pivotal time, for an open discussion of future design directions of our cities.”

Read my take on the competition, and see the pictures here.

Technically, I cant argue with the assessment made by an engineering aquaintance that this scheme is eco-baloney.

Still, while it may not be feasible to create a series of open sewers lined with habitations, which also steal away the drinking water of New Orleans, and running the CTA through abandoned sewer tunnels, it does create a visually compelling vision of the kind of habitat we would like to build for the future.

The basic difference between engineering and architecture is that one solves practical problems, while the other helps society define and express the problems we want to solve.

This beautifully executed vision does the latter. It expresses our collective desire to inhabit the earth in harmony with nature.

To all interested, Urbanlab and other Chicago participants (Garofalo Architects, Sierralto/Strawn) will be giving brief presentations on their projects at the UIC School of Architecture on February 19th, 2007. The lecture starts at 6pm in Gallery 1100, and will allow for discussion at the end of the presentations.

UIC SoA lectures sometimes get crowded (like LOT-EK last week), so get there around 5:30 or so if you definitely want a seat.

Also, Thom Mayne is coming up in April- not to be missed.