The Joy of Sax?

Just when you think it can't get any kitschier . . .

Crain's Chicago Business is reporting that the House of Blues Hotel, set up in what was the 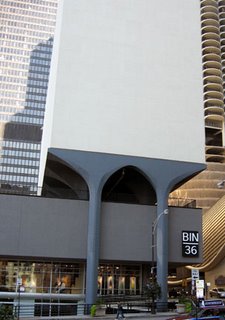 office building of Bertrand Goldberg's classic, groundbreaking Marina City complex, will soon be no more. This coming May, Gemstone Hotels and Resorts will reopen the facility as the Hotel Sax. Apparently regressing to vintage New Orleans is no longer enough. The New York design firm of McCartan will be creating, in the words of the press release, a concept that "mixes the essence of a 17th century French Salon executed with a 21st century twist. An eclectic array of furnishings from India and Europe are also used in exotic colors and finishes." Louis XIV, bowling alley attached. Lucien Lagrange, eat your heart out.

Gemstone has already vandalized what should be a landmark building with large expanses of battleship gray paint that subverts the lightness of Goldberg's original design, making it look gloomy and, yes, cheap. Buckets of money and a complete innocence of taste - what new wonders will they now bring?

Lynn,
You must be just loads of fun at a cocktail party.

Although, as someone who often walked by that facade when the streetscape presented a view of a closed ITT Technical Institute office... even when it was white, it was gray.

I hate the battleship grey--hopefully it will just flake off, but a Louis XIV bowling alley sounds delicious. I can't wait to see the shoes...and the balls--I hope there gold.