The Entombment of the Plug Bug

For a decade and a half the Plug Bug has looked down at Block 37 and laughed. The creature that resembles the love child of a marriage between the Hindu God Vishnu and an L. Ron Hubbard alien, painted against the pepto-bismal background of a three-story high, open-air mural, has never been able to contain its amusement at the city's impotence to make Block 37 anything more than a square-block dirtpile since it rushed to demolish every structure on the block - save the ComEd substation on which the Plug Bug is painted - in 1989. Finally, however, the last laugh may be dawning on the Plug Bug, itself. As you can see from the photo below, construction is actually progressing on Block 37, including both a new tower that will be home to CBS/2's street-level studio and a block-long retail complex along State Street across from the Marshall Field's/Macy's flagship store. 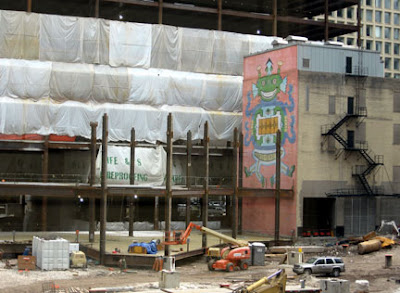 Like Aida and Radames, the Plug Bug has been condemned for its insolence, and is now being entombed within the newer structures going up around it. Thousands of years from now, when future archeologists pull down the last steel beams of the buildings currently rising, the Plug Bug will again be revealed, and future peoples will be amazed and perplexed as they create their own stories of what it must have meant to we lost-in-time primitives of today. 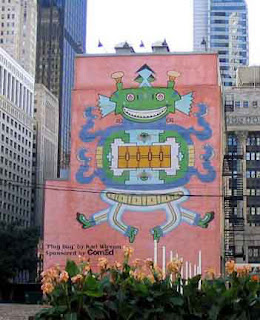 I would be curious to hear what true Chicagoans think of this. As the great-grandson of Zachary Taylor Davis I an not imagine what purists will think

As someone who knows Karl Wirsum, his current work (which still looks as cartoon-ish now as work from the 70s) and Chicago Imagism, I thought it was a masterful eyesore. When I first came to Chicago in 1990, I thought it looked like one of those 6th grade art projects where the kid who wins the school's submission in a city-wide art contest gets to have their design made into a mural. Imagine my surprise when I learned that a respected Chicago artist created it.

I never understood why, out of all Chicago’s Imagists, that particularly goofy design from Wirsum was chosen. Perhaps it was his child-like sensibility, the simple lines and fills making replication on a large surface easy, or the pretty colors that seemed to work with a slowly changing color palette of skyscraper architecture from Miesian charcoal to Jahn primaries and pastels. Perhaps it was a late opus that THIS was Chicago’s biggest regional art movement of the time. At any rate, I noticed its architectural cover-up yesterday but shed no tear at The Bug’s disappearance from our streetscape.

That thing (Plug Bug) is hideous and I'm glad to see it go. Now if Chicago could only begin to build buildings in a manner like NYC has; ones which are mom and pop store friendly instead of gearing all of our new buildings to more Starbucks and Walgreens it would sure be nice. Wake up Chicago, learn from NY, its the most expensive city in the country for a reason... Just about Everyone wants to live there!!!

I have no idea what you're talking about anonymous 12.35. Many of the new NYC projects I've seen are filled with banks and chain retail as well. And some of those are designed by starchitects, while ours usually aren't.

I was just in NY a month ago and I don't know where you are talking about that is all chains. Yes there are chains, yet there are a ton of mom and pop stores all over the place. Now, Times Square is mostly chains, but if you venture off onto side streets such as 30th-50th streets or 2nd or 3rd Avenue, or into the SoHO/Greenwich village area you will find a ton of lower multi-use skyscrapers about 20-40 floors in height where the ground level is totally geared to little stores that usually seem to be ARAB owned selling Knick nacks and NY stuff like little Statues and such.

Do you ever watch Seinfeld? The soup kitchen Nazi though a fictional character, owned a little store in one of those type of places. Chicago needs more of those type of little places, but if the rents are to high then there is no way that they can afford it.