Two great reads worth checking out before they vanish into paid archive hell:

The danger of becoming skin deep - Because I've been sitting on my behind since last March's Chicago Landmark Commission vote approving the demolition of the landmark Farwell Building and pasting its saved/recreated facade onto a completely new building on its former site, Chicago Tribune architecture critic Blair Kamin has beaten me to the punch in taking on the decimation of the idea of landmark preservation under pressure from wealthy and connected developers. Increasingly, landmark buildings are being sliced and diced, stripped of context and laid out in a sort of architectural taxidermy.

Kamin covers both the Farwell, the facadectomy razing a series 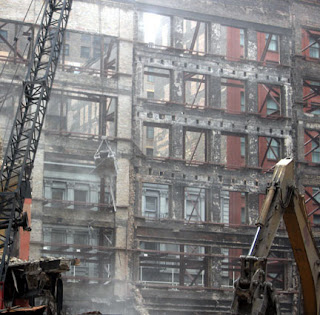 of historic, landmarked buildings along Chicago's Jewelers Row in order to create the new 59-story Legacy at Millennium Park, and the sad case of Maxwell Street, whose legendary and unruly open air market was destroyed to advance the gentrification of the area around the University of Illinois Chicago campus. A single block was retained, its historic buildings restored and polished to a level that never existed during their long, useful life, leaving behind a leering corpse, as beautiful, perfect and phony as the Main Street at Disneyland. And - wonders of wonders - the Trib actually includes a web gallery of 14 photos, with several 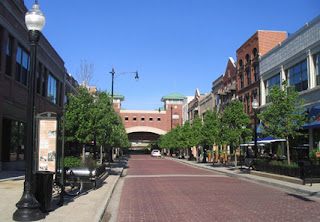 comparing the dead and empty avenue that Maxwell Street has become with the anarchic, explosively alive market that it ostensibly commemorates. Kamin also talks about a case of preservation done right, in Burnham, Root and Atwood's 1890's iconic Reliance Building. Read all about it and see the pictures here.

Instant Urbanism - San Francisco Chronicle architecture critic John King offers up a sterling report on the rise of new suburbs that are less about sprawl and more about emulating traditional center city neighborhoods. "What's emerging," says King, "is a new form of the American Dream -- a new type of landscape where the lines between city and suburb blur in ever more complex ways." He looks at new suburban developments in Denver such as Belmar and Stapleton, the latter built on the site on what was formerly the city's major airport. Alleys replace driveways. Buildings hug the sidewalk. Towers rise. Instant town centers - beautiful downtown Belmar - pop up as if they were pulled out of a box of cracker jack box. Is it a sideshow or the future? Read all about it, hear King talk and see the pictures.

Kamin is entitled to his opinion, but it's a fringe opinion, and it's unfortunate that the Tribune only presents a single unbalanced view of the issue. Hopefully the Tribune's new owner will repair its pathetic product.
Lots of people who are not "wealthy connected develeopers" think there is nothing wrong with saving parts of old buildings. A few odd buildings may qualify for museum artifact status, but they are not the norm.

So just because Blair Kamin does not agree with you (or the majority) he should be censored by his employers? Should we censor all "fringe opinions"? Do you get to decide what is "fringe"?

Nothing was said about censorship. Responsible newspapers can print fringe opinions, but they should also provide the rebuttal argument.

anonymous, we've told you before: it's one red pill before bed and two yellow pills in the morning.

Blair is a critic, and should be understood as such. If a theater critic pans a play, do you feel that the paper is obligated to print a positive review ?

(plus he happens to be right, not fringe. Equal or greater shame to the architect of such project, not just the developers. The architect should know better.)

I think there's a difference between Kamin and a theater critic who pans a play. Plays come and go, and there are always new things to discuss. Kamin, however, is on a sustained crusade, and to my ear, it's getting old and boring. He stated where he stands long long ago. He would be the equivalent of a theater critic who says musical plays suck under all circumstances. Professional theater people wouldn't think much of a newspaper that only printed that opinion.

Kamin is no different in his opinions about architecture than Artner is about Art. Both offer their criticism as opinion, and in Kamin’s case, he has a Pulitzer Prize to back his expertise in both writing and what makes architecture relevant. The Chicago Tribune is one of only a handful of papers that regularly devotes a column to architectural criticism. Your view that Kamin may be biased and offers no alternate opinion is noted, but it is severely misguided and unwarranted. As I suggested previously, I think your medication is wearing off, and I kindly suggest you consult your prescription list.

Just for the record, I believe I am the only Chicago resident that likes the new Maxwell St. and surrounding development, aptly named University Village.

I sure wish that Chicago's suburbs' planners would take a trip to NYC's burbs and study them closely. Rockville Centre, NY for instance is a beautiful town set on the south shore with EXTREMELY high property values. It's downtown area has a nice Norman Rockwell type setting with it's Main Street style atmosphere. Houses, though not huge, are nicely sized on ample lots along tree lined streets. Trains regularly run along an elevated platform which link the suburb to anywhere basically.

Long Island's burgs just create a nice setting for those that have the pleasure to live there, to bad Chicago's suburbs are all about building "Houses that are made out of ticky tacky that all look the same". (Malvina Reynolds)

I really liked your blog, appreciate the great information about Jewelers Row Chicago
many thanks...