The house that cried "Mother" 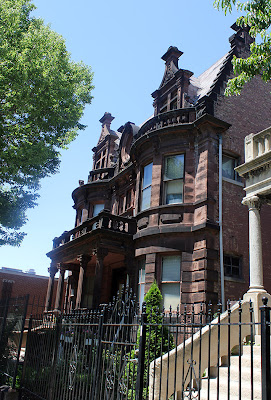 click images for larger view
There is no shortage of grand homes surviving along Garfield Boulevard, but none is grander than the house just east of Halsted, built at the turn of the 20th century by one James O'Leary.

The name, of course, rings a bell: Mrs. Catherine O'Leary - and her cow - the fabled causes of the 1871 Great Chicago Fire.  It was a bum rap, but the pair remain at the pinnacle of Chicago folklore.  James O'Leary was Catherine's son, born in 1869.

In true rags-to-riches fashion, Chicago style, O'Leary went from stockyards worker (public revulsion over the "Mrs. O'Leary's cow" myth had helped drive the family into financial ruin), to running a Halsted Street saloon, to adding a bookmaking operation in the back room, to becoming "Big Jim", king of South Side gambling, proprietor of a kind of casino superstore at 4183 South Halsted, a honeycomb of gambling rooms protected and concealed by steel and trap doors, retractable ladders,  heavy oak walls covered with zinc, and even a fake chimney, all revealed in this cutaway sketch originally published in Casino Review magazine.  "Fire-proof, bomb-proof, and police-proof," said O'Leary.

"A fellow that won't gamble or steal," O'Leary was quoted as saying, "is a beggar."

O'Leary had the reputation of being an admirably honest crook, one who would pay off his customer's winning bets promptly and without complaint.  For the local newspapers, he was the predictor-in-chief for each Presidential election.  In 1908, his odds were 4 to 1 for  William Howard "Big Bill" Taft versus 5 to 1 for William Jennings Bryan.  O'Leary was said to have bet  on anything - even crops and the weather -  but he knew his trade. 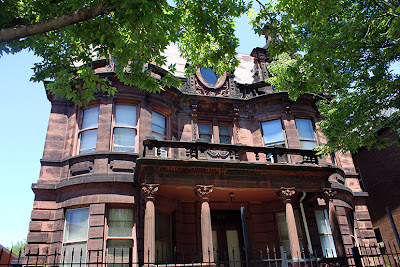 O'Leary built his 33 room Italianate mansion, credited to architect Zachary Taylor Davis, in 1901, at a reported cost of $60.000.  Since 1991, it's been owned by a single family, parents and their six grown offspring.  Before they acquired the house, uninvited visitors had already been making away with doors and other valuable elements of the interior.  When I was taking the photographs you see here, I was lucky to encounter one of the brothers, who pointed out to me where O'Leary's initials were incorporated into some of ornament on the porch.  He walked me back to the alley, past the house's original two-story coach house, hay chute still in place, and showed me what's reported to be the city's only fire hydrant set up for a single home. 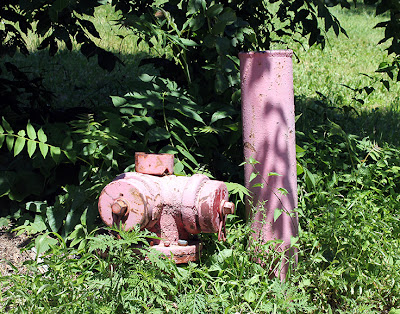 Lightning seldom strikes twice, but why take a chance?  In fact, after O'Leary died in 1925, lightning did strike twice.  His grand gambling palace was destroyed in the 1934 Stockyards fire, Chicago's second largest conflagration after that unpleasant event in 1871.

Catherine O'Leary had died in 1895 - Big Jim insisted it was of a broken heart, although at 24 years past the event, that explanation sounds a bit like the comment about Hyman Roth in Godfather II - "He's been dying of the same heart attack for 20 years."  Still, in popular perception, sentimentality is one of the bedrock characteristics of being Irish.  It's said that Catherine O'Leary's is the face her son lovingly incorporated into the ornament high up on the facade. 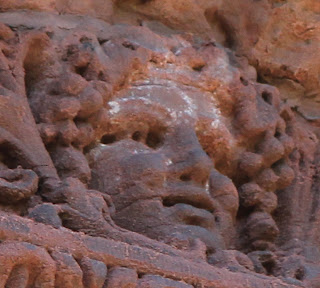 Even more striking, as my tour guide pointed out to me on Monday, when you look at the twin dormers forming what looks like a pair of giant "M's" flanking the large round window in the center, the top of the building seems to be spelling out a even more overt expression of filial devotion:  "MoM". 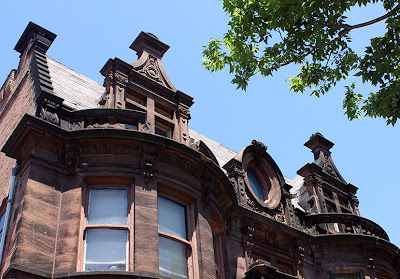 Todd said...
This comment has been removed by the author.
9:43 PM

Todd said...
This comment has been removed by the author.
9:48 PM

this house needs a very brilliant mind to make it a hunted house ,museum or so .

Very interesting to see such a historic
mansion still standing. Hope its on the list of Illinois Historical Places.
Should be renovated in its original condition & made into a museum piece!