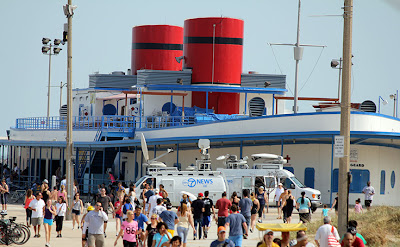 click images for larger view
Ok, now blow it up about ten times bigger and stick it atop a trio of 57-story towers as if it were beached in the subsiding of Noah's flood . . . 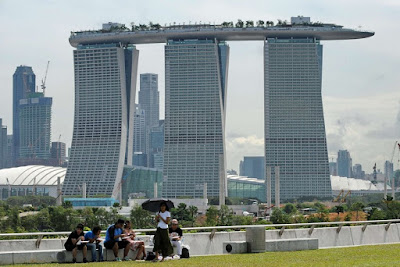 . . . and you get the Skypark atop Singapore's Marina Bay Sands resort complex, designed by architect Moshe Safdie, a long way from Habitat '67, with Parsons Brinkerhoff and the inevitable Arup taking on the structural engineering chores.  The project was brought our attention by our indefatigable correspondent Bob Johnson. 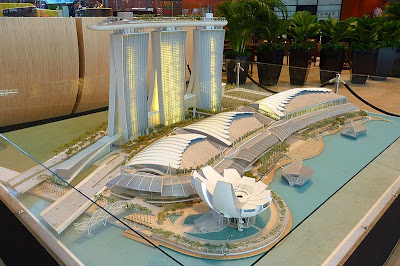 photograph: Wikipedia Creative Commons, CMGlee
This is what $8 billion will buy you these days: 2,500 hotel rooms, a shopping mall and convention center splitting up 2 million square-feet, an infinity swimming pool the length of a city block, two theaters - Lion King included - and a casino with 500 tables, 1600 slot machines. and no fewer than 14 cocktail waitresses named Agnes.  The lip of the two-and-a-half acre Skypark makes up what Arup claims to be "the world's longest public cantilever . . . constructed from a pair of tapering post-tensioned steel box girders up to 10 meters deep, supporting the concrete deck." 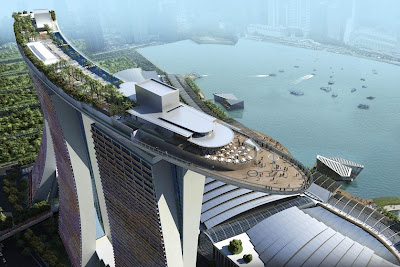 Running the show is the Sands Las Vegas Corporation, which could have fit more than two of the late architect Martin Stern, Jr.'s also late Sands Tower into each of the Marina Bay's three skyscrapers, and still have more than enough space left over for the egos of the Rat Pack.  While the Sands Tower bore a distant resemblance to a tubby Middle-Eastern minaret, the Marina Bay's design carries no regional design elements.  If it followed a school, it would have to be Mega Modern, High-Tech, High-Roller Bling. 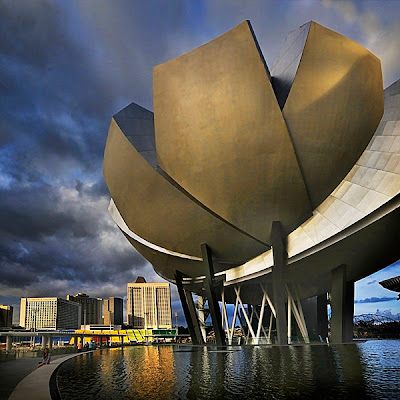 photograph:  Wikipedia Creative Commons, William Cho
At the base of the complex is the recently opened ArtScience Museum, whose 21 galleries are housed in 10 metal-clad "fingers" - their tips cut off to allow in natural light that make up what is called "The Welcoming Hand of Singapore", open to currencies of all nations.  It's moated in a 40,000 square-foot lily pond.  (What I would give to hear what Alfred Caldwell's appraisal.)  Appropriately enough, among the ArtScience Museum's inaugural exhibitions is Dali: Mind of a Genius, which includes a massive mural he created for Alfred Hitchcock's film Spellbound. 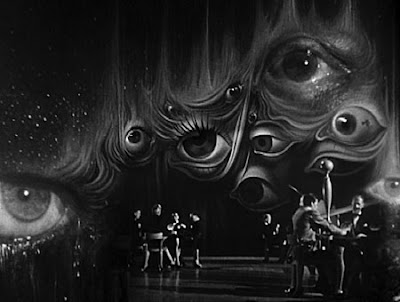 Who knows?  Maybe Marina Bay is the what Dali would have done if he had survived into the 21st century - with a lot more money. 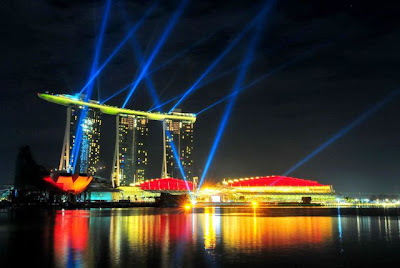 Wonder what the "longest private cantilever" is..

More to the point, I'm wondering what the longest public cantilever might be.

"The Welcoming Hand of Singapore" might recall Corb's Open Hand at Chandigarh.

Safdie says it can also be flower/lotus (as at his Punjab project) or even a sort of satellite dish.

The reception must be fantastic!

It also might recall this recent found object arrangement http://www.asiaone.com/News/Latest%2BNews/Asia/Story/A1Story20110509-277785.html