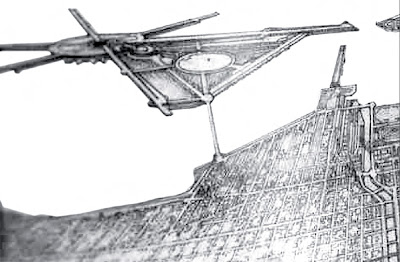 Everyone knows about the Burnham Plan.  How about Marion Mahoney Griffin's master plan for post World War II Chicago?  Many remember Richard J. Daley's 1960's proposal to build a third Chicago airport in Lake Michigan, but in 1945, long before O'Hare, Andrew Rebori was proposing a new harbor airport north of Navy Pier on a mass of landfill that would have put Northerly Island to shame. 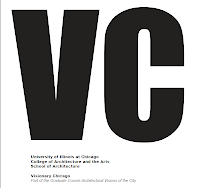 These were just two of nearly 100 unrealized Chicago projects, from the 1870's on,  that UIC School of Architecture professor Alexander Eisenschmidt presented to his graduate History and Theory students, who chose 22 as "Architectural Visions of the City", to research, analyze, and place in a contemporary understanding.  Frank Lloyd Wright's unrealized skyscraper for National Life Insurance, Stanley Tigerman's Urban Matrix and Adolf Loos entry to the Tribune Tower competition, and Ludwig Hilberseimer's 1940 Plan for Chicago were among the other subjects in the mix.

Through September 2nd, the results of all that work are on display at UIC's Art & Architecture Building.  As described by this review by Phillip Berger in the Architect's Newspaper, don't expect the show, Visionary Chicago,  to be entirely easy to take in - boards rise as much as 12 feet above the viewer's head.

There's also a catalogue, which Eisenschmidt describes as . . .

. . . the beginning of a research project to collect, record, compare, analyze, and extrapolate these architectural dreams . . . All of the projects were reconstructed through drawings from a limited set of information (sometimes only a single sketch), bringing the ingenuity of the student researcher in proximity with the project they analyzed. Some schemes are well known but not well documented, while others had disappeared from the architectural consciousness and are here reintroduced into the discourse through drawings, programmatic analysis, and historical and contemporary references. Therefore, the catalog functions simultaneously as a collection and invention of evidences – a constructive and opportunistic re-inhabitation of these visions. Ultimately, the catalog is a directory of ideas, ideas of how to engage the city. 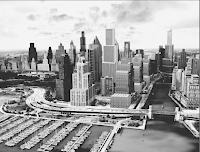 Remove the word "young", and the epigraph, a quote from Louis Sullivan's Kindergarten Chats,  could be describing the city today.


“Chicago is young, clumsy, foolish, its architectural sins are unstable, captious and fleeting; it can pull itself down and rebuild itself in a generation … it has done and can do great things when the mood is on … One must indeed be incurably optimistic even momentarily to dream such a dream.” 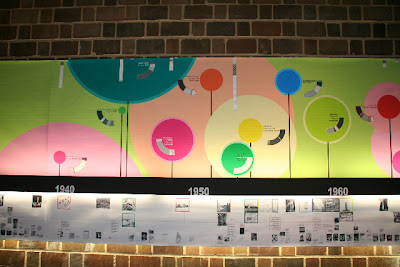 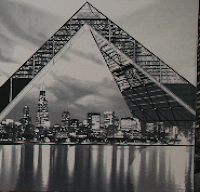 Again, the show runs through September 2nd in the Ramp Gallery of UIC's Art & Architecture Building, 845 West Harrison, Monday through Friday, 9:00 a.m., to 5:00 p.m.  It's been described to me as being "kind of tucked away" at the back the building, but it looks like something well worth checking out, and I'm told signs have been posted to help you find it.  Info here.