Once upon a time, not so very long ago, River North was skid row, full of derelict old buildings long past their prime.
And being a very edgy part of town, it attracted not just the desperate, but the adventurous.  It was on Clark Street that Jim Flint opened the Baton Show Lounge all the way back in 1969.  Slowly, things began to change.   In the late 1980's, Rick Bayless would still find drunks sleeping it off in his doorway as he came in the morning to open up his pioneering Frontera Grill, but River North was becoming trendy, attracting restaurants and new residents.  Under the watchful eye of developer Albert Friedman, River North has become once of the most thriving communities in Chicago, with more and more of the district's original loft architecture falling to huge office buildings, soaring residential towers, and glitzy hotels. 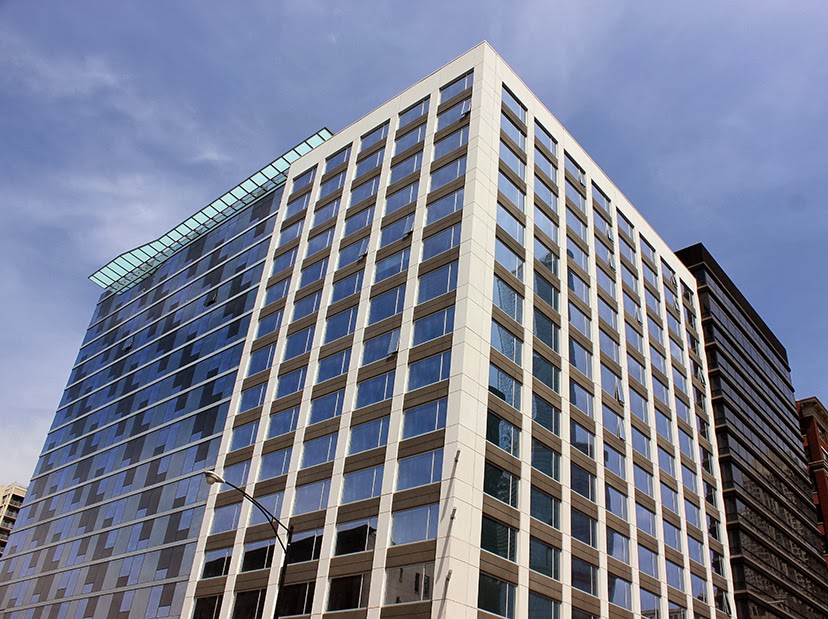 As is always the case with rapid development, the offbeat older businesses that originally made the district area attractive - drawn to the district by it's affordable rents - are, over time, dispossessed by the much more generic enterprises that can afford the rapidly escalating costs of land and leasing. 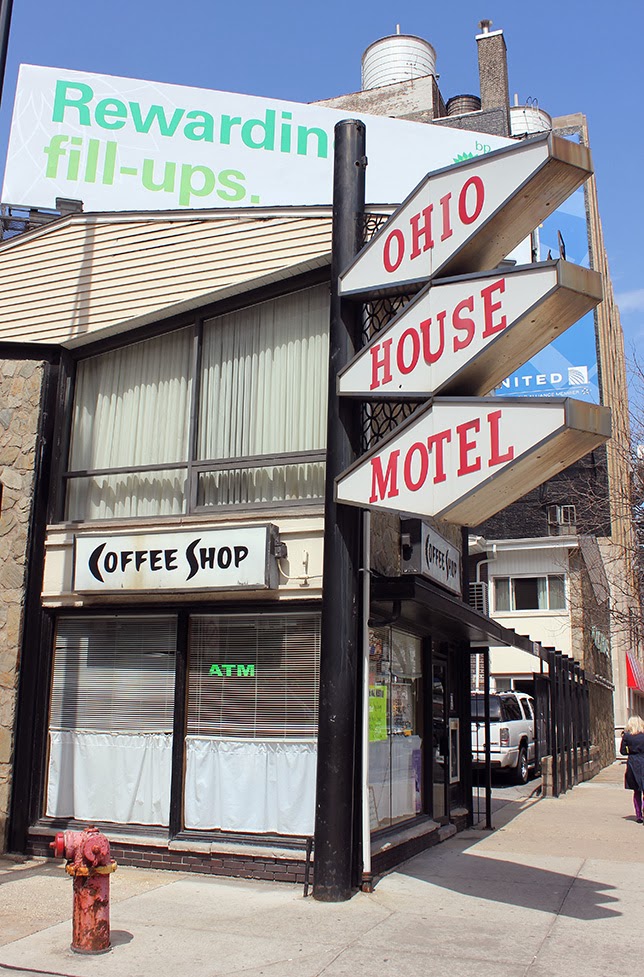 Last year, there was a sense of loss as the old-school diner Ohio House Coffee Shop was kicked out of a location they had held for 53 years. 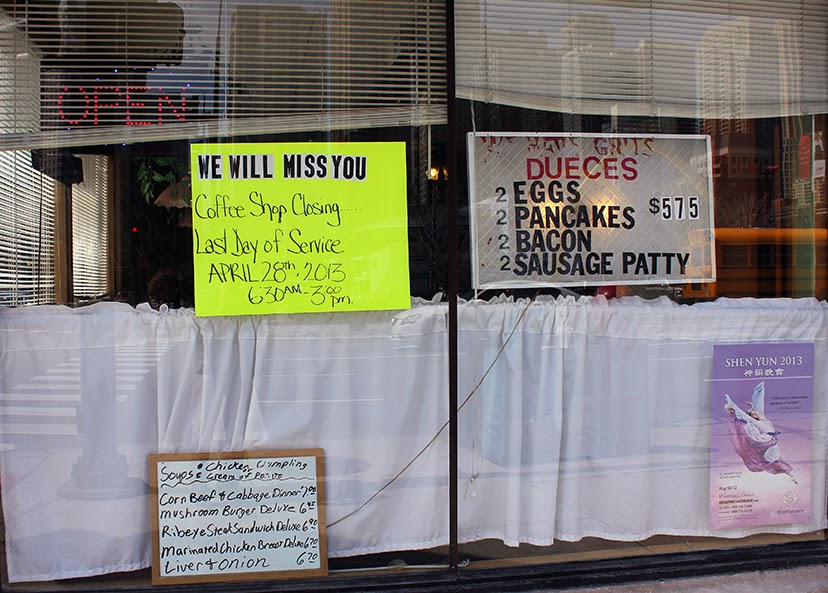 Now the same story is playing out its end game a few blocks to the south, on Kinzie between LaSalle and Wells.  The street was once a kind of antiques row, dominated by the massive Jay Roberts Antiques warehouse, the brick facade of the three-story 1892 loft building carefully antiqued. 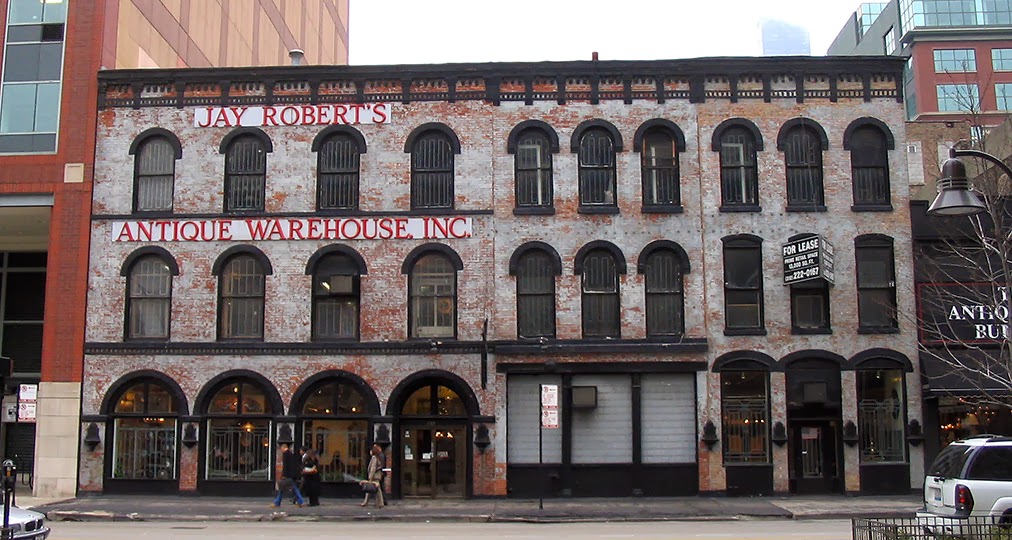 In 1990, the 15-story 350 North LaSalle rose just to the west. In 2008, about the time the 28th-story EnV residential tower began to rise on what had long been a surface parking lot at Kinzie and Wells, Jay Roberts “temporarily” moved out. 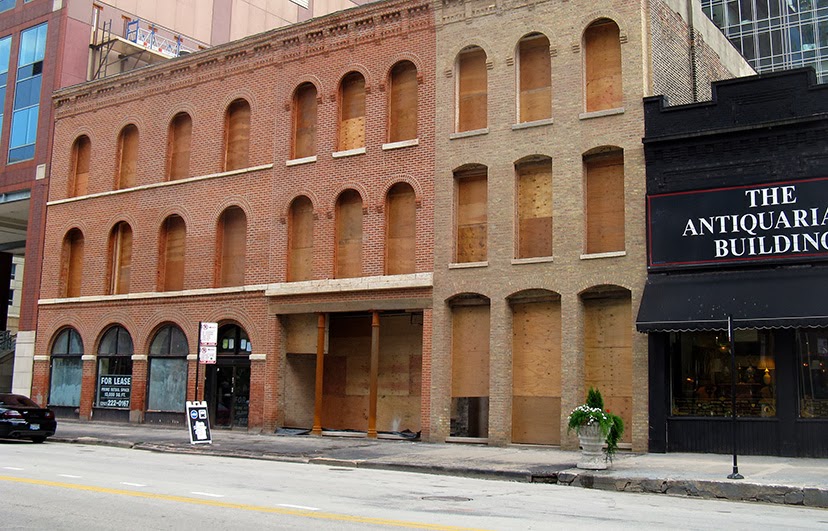 The brick was stripped clean, showing how the warehouse had actually combined several separate buildings.  In 2010, a River North outpost of Moe's Cantina opened at 155 West Kinzie in the western two buildings, one of which sported a new parapet, while a reduced Jay Roberts re-opened in the large building to the east. 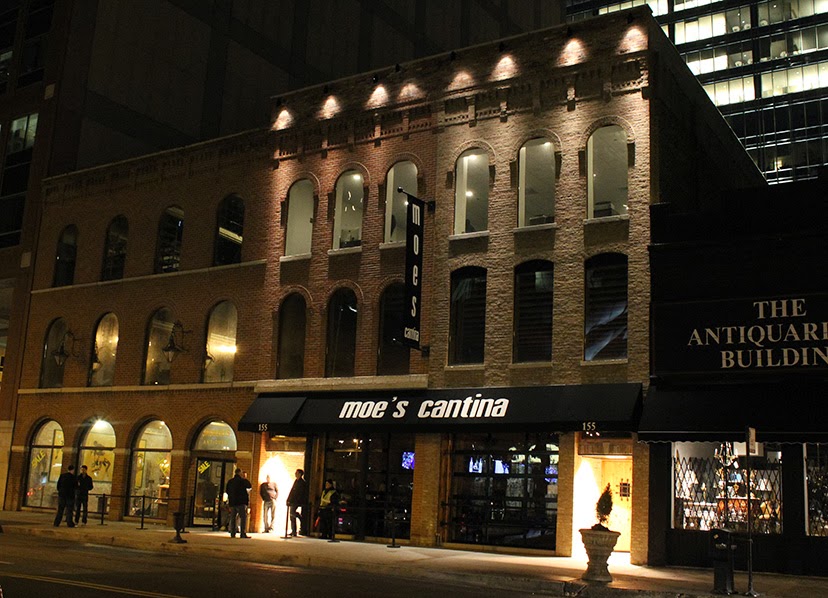 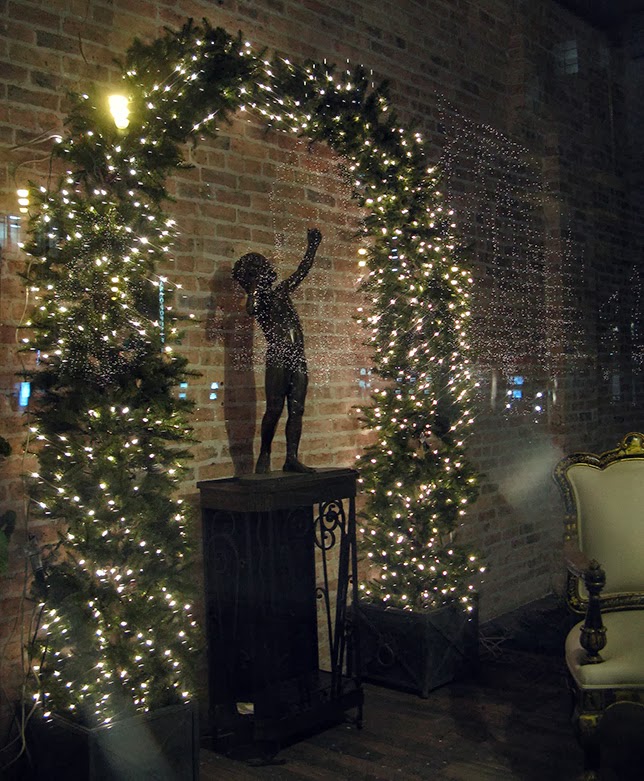 After they left, there was another rehab in 2011.  A human skeleton was found in the basement by construction workers.  In 2012, the space was taken over by the River North location of Moe's sister brand, John Barleycorn. 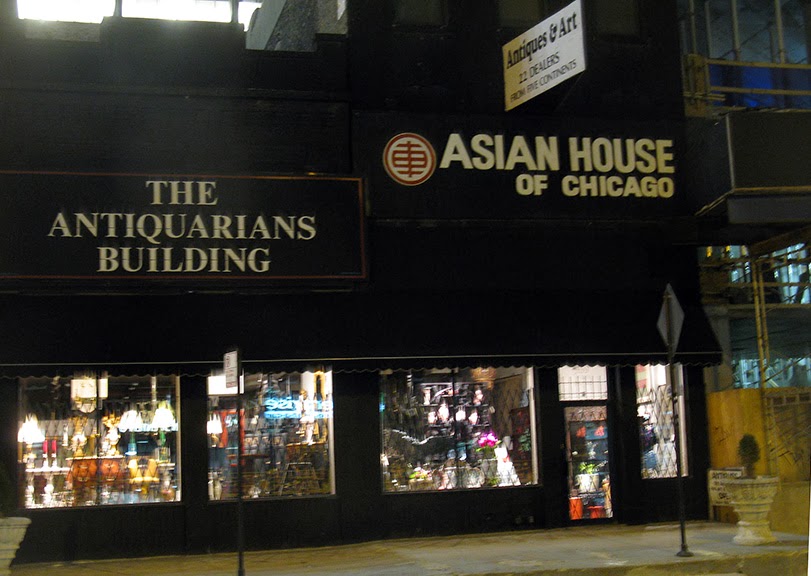 Now time is running out for the last remnant on the block, the black-painted 1909 structure at 159 West Kinzie long home to Antiquarians Building, housing 20 different dealers, and Asian House of Chicago.  The 23,500 square-foot building has been on the market with an asking price of $5.4 million.  Now it looks as if a sale has been made, as large “Moving Sale” signs are in the windows, although the Asian House website makes no mention of a new location. 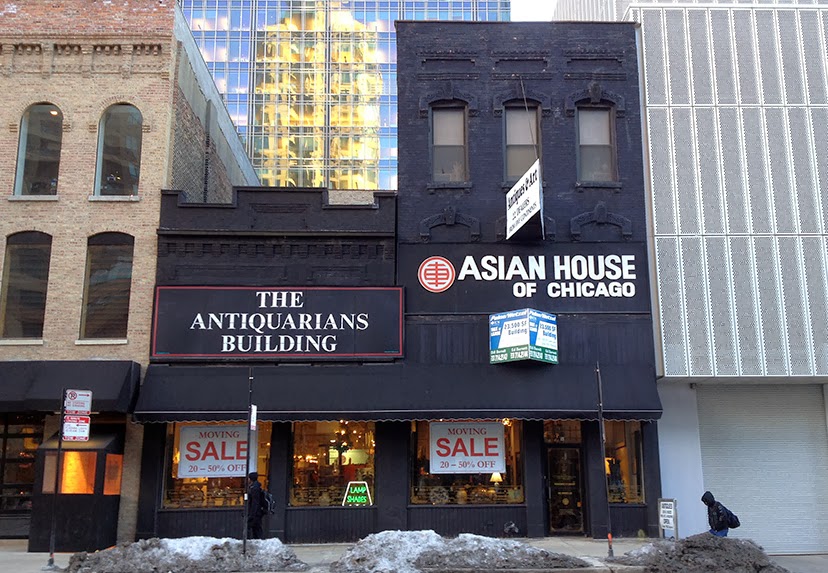 No news of what's going in.  The site itself is narrow - only a 40-foot frontage, with a total footprint of only 6,600 square feet - and it's flush up again the shear rise of the EnV tower.  The sales flyer enthuses “Surrounded by Restaurants, Boutiques, Showrooms, High-Rise Office and Residential” so quirky would seem to be out the question. 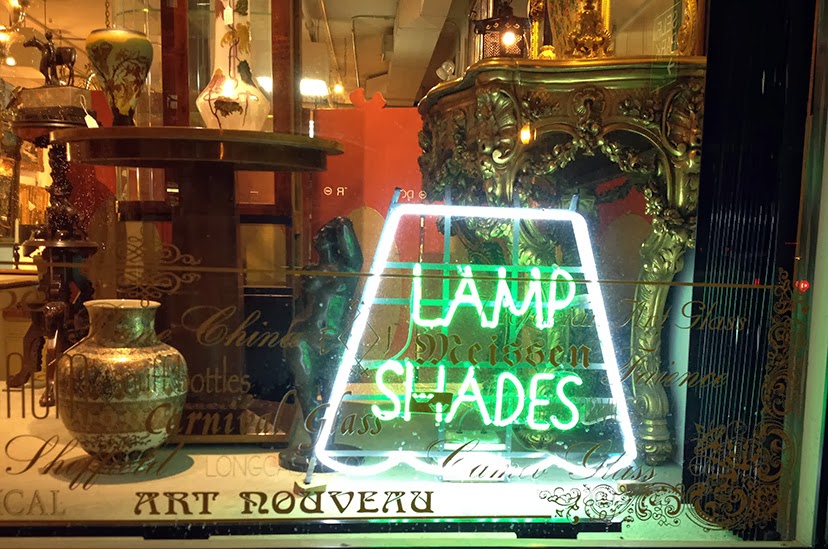 And so it goes.  A hundred years from now, when the river has became a canyon of mile-high towers, will EnV, dwarfed in their shadow, be considered the funky antique? 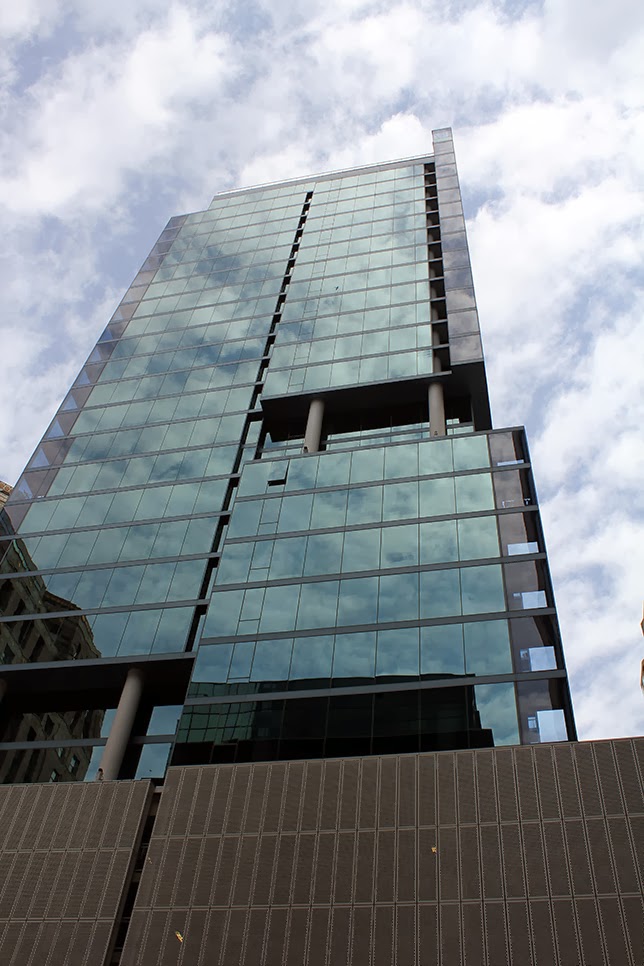