The anti-Pritzker? Wiel Arets Gets IIT into the Architecture Awards Game: $50,000 Mies Crown Hall Americas Prize to be announced today 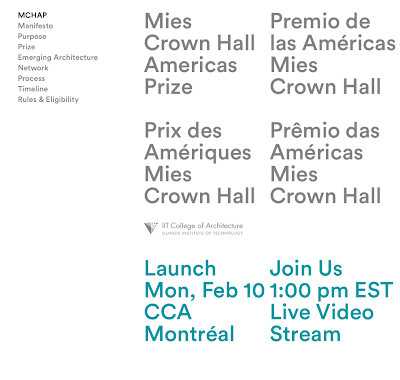 I think Mies was a great thinker and a master in scale. He was someone who under- stood that there has to be a distance between us and a building, just as there is a distance between us and nature. Today this is dwindling. When you read Mies’s texts, they were short and precise, and that makes him a model for all of us. Mies knew what architecture was about, and he knew how the architectural product was part of our landscape, environment, and world. It would be great to announce at this very place, in 2015, the first North American architect, and emerging architect, to receive the Mies Crown Hall North America Prize; to establish this prize would be a challenge and a stimulating event for the global architectural discourse.

That was Dean of IIT College of Architecture Wiel Arets talking early last year in NOWNESS, the publication reflecting how “Arets is leading the movement of the COA toward ‘nowness’ - a multifaceted approach to the discipline of architecture and the embracing of urbanism in the world's metropolises.”

Less than a year later, a major piece of the campaign is falling into place.  Today at 1:00 p.m., from CCA Montréal, there will be an announcement - streamed live - of the establishing of the biannual Mies Crown Hall Americas Prize, which has its own website here.


The Americas Prize will laud those built works that recognize the altered circumstances of the human condition. It will honor those projects that consider how we might elevate the quality of our built environments by extending our interests beyond the proverbial four walls. It will endorse those who acknowledge the interdisciplinary nature of our new ventures. Above all, it will recognize those who have invested their work with the mystery and power of human imagination. The objective is to reward the daring contemplation of the intersection of the new metropolis and human ecology.

The $50,000 Americas Prize will honor “the best architectural work in the Americas completed in the preceding two years. ” It will come with ”the MCHAP Chair at Illinois Insitute of Technology’ for a year, where the winners will give a public lecture and  “establish research related to the theme of “rethinking the metropolis’.”   The work will be featured in a MCHAP Book, along that of finalists and other projects the jury may choice to recognize.   Last December, the COA was posting open positions for both a Director of Publishing and a MCHAP Co-ordinator.  The Americas Prize Director will serve as a non-voting member of the five-person jury.

There will be a benefits dinner this spring, with the awards ceremony scheduled for this October.  More information - and, presumably, a link to this afternoon's noon CDT live stream  - here.

The World of Wiel Arets lands at IIT.  Read here.