You apparently can't keep Luftwerk away from the Chicago Cultural Center.  It's been less than a month since their striking media exhibit Shift was on display in the CCL's 2nd floor galleriess.  Now Petra Bachmaier and Sean Gallero's mastery of color, light, video and projection has left the building and taken over it's long Michigan Avenue facade with Spring Light, which opened last night and repeats tonight (Saturday) and Sunday, 5 to 10:00 p.m.  It's described as . . . 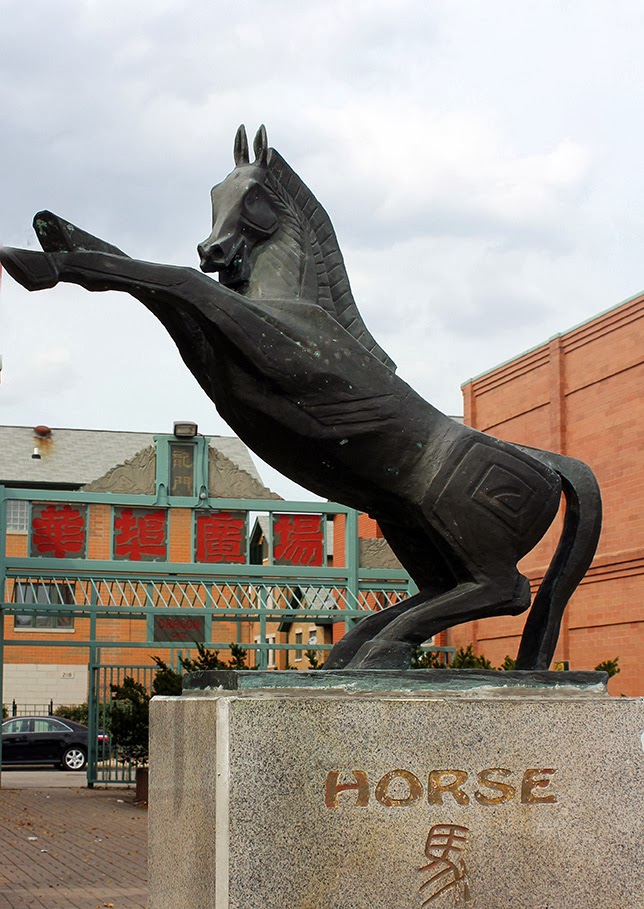 A celebration of light and projection inspired by Chinese philosophy, art, architecture and traditional folklore illuminate the Chicago Cultural Center to commemorate the Chinese New Year. Spring Light transforms the building into a moving world where images of nature, people, geometry and color all intertwine in an artistic and harmonious balance. 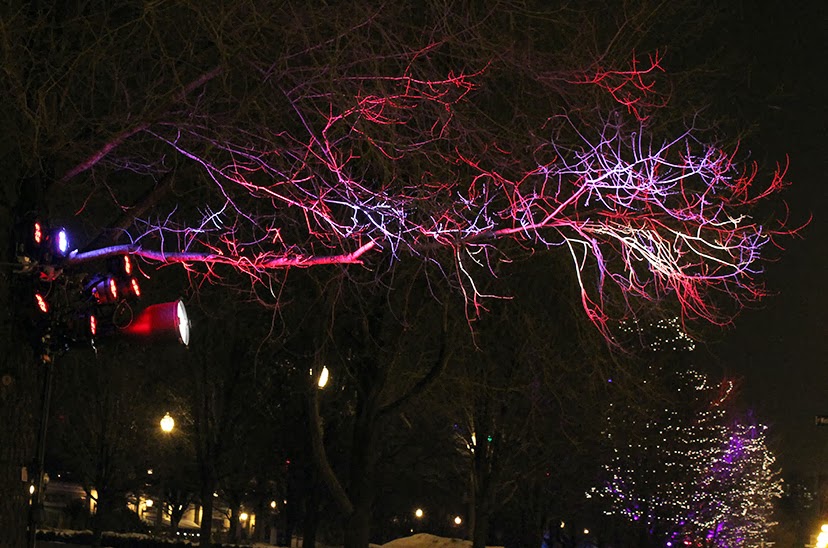 Spring Light  is an initiative of Chicago Mayor Rahm Emanuel and Choose Chicago, the city's tourism operation.  It's a two-week, city-wide celebration of the Chinese New Year and Spring Festival with a sequence of events that includes shadow puppets in Macy's windows, a free celebration by Redroom Theatre tonight (Saturday) from 6:00 to 7:30 in Navy's Pier Festival hall, and parades both on Argyle Street Saturday at 1:00 and the Lunar New Year parade on Wentworth in Chinatown Sunday at 1. 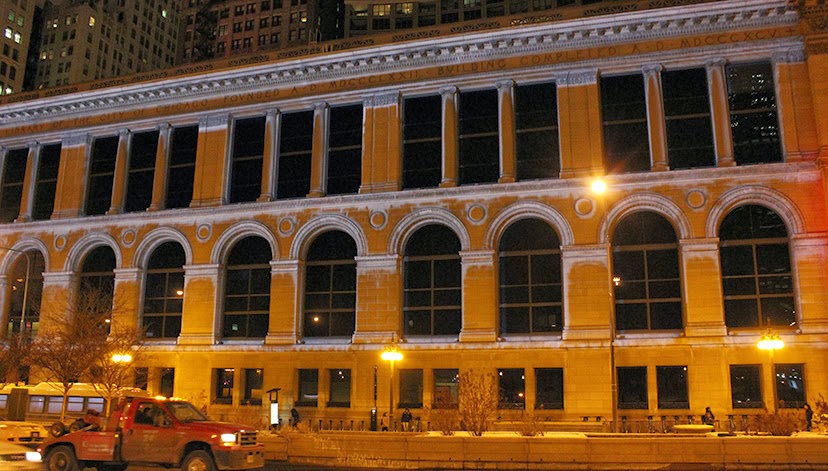 In a city that's besieged with financial problems, it's tempting to make some kind of comment on circuses in lieu of bread, but the fact of the matter is Chicago has an annual GDP of nearly $600 billion.  Rahm's Chinese New Year is a self-consciously shrewd move, not only to increase tourism, but to both address China as an increasingly powerful nation, and Chicago's own increasingly vibrant Chinese-American community.  (The events have already been picked up by Chinese news agency Xinhau.) Chicago is a great city, winter - especially this winter - is often cold and dark.  The Luftwerk installations are a welcome reminder of the city's resilience.

Spring Light plays with the element's neo-classical design with a series of overlays that evoke a cast-iron storefront, Renaissance-style rusticated stone, and even an Alhambra-like veneer of light. At one point it even seems to peel away the Cultural Center's facade and draw it up like someone removing a sweater over their head.  But there's a lot more than that, as you can seen in this video of excerpts (click on YouTube to see the video full-size):

Luminance has taken over the McCormick Tribune ice skating rink at Millennium Park.  As with Shift, the shadows of the skaters lose their monochrome and extend, contract and intersect in a rainbow of pastel colors. 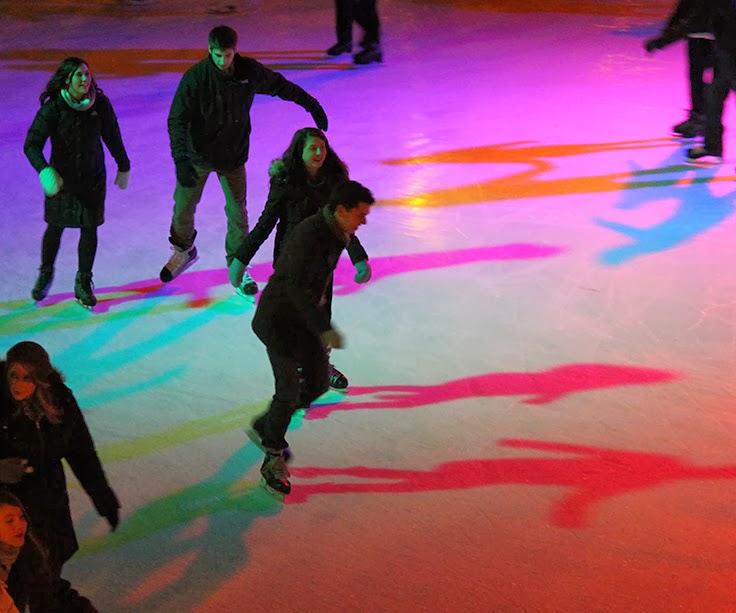 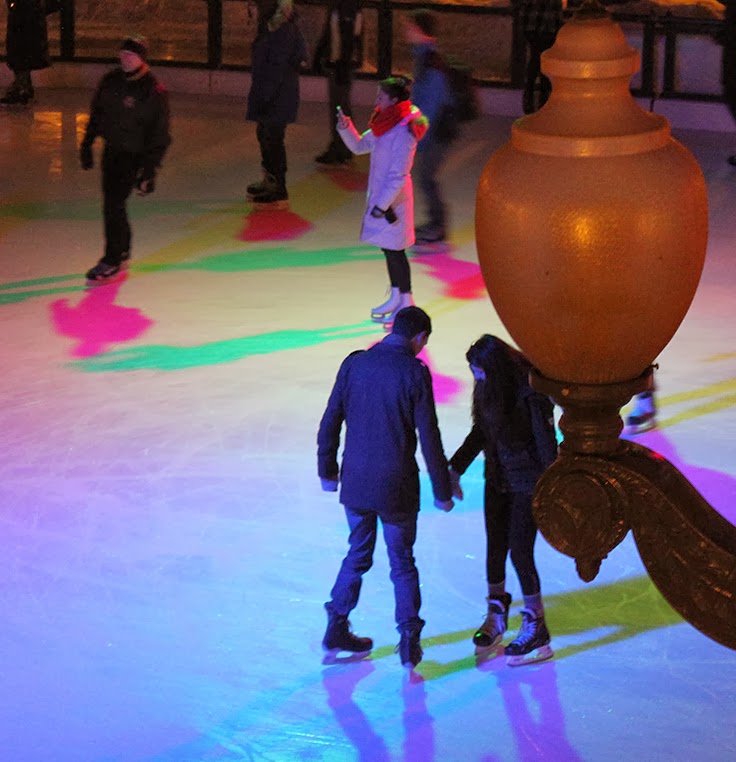 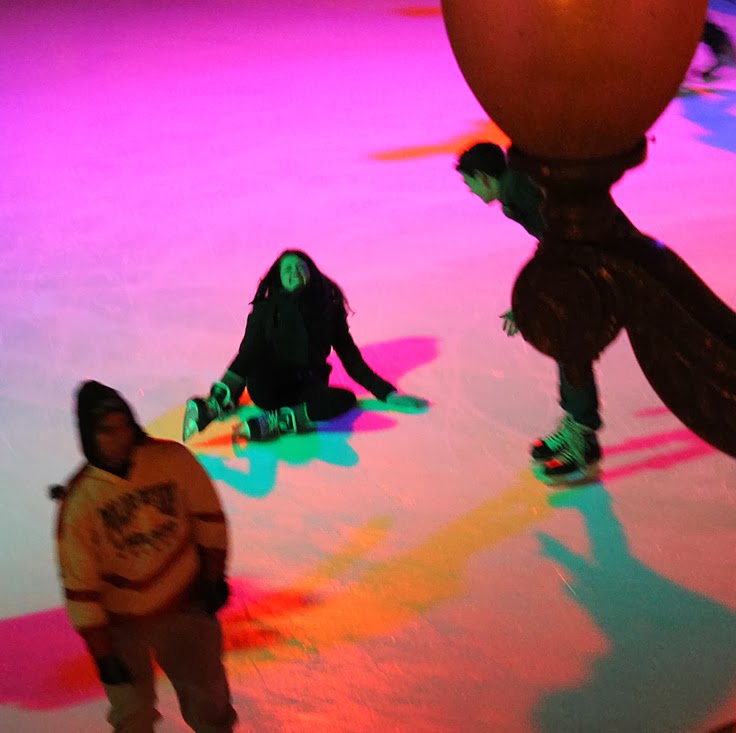 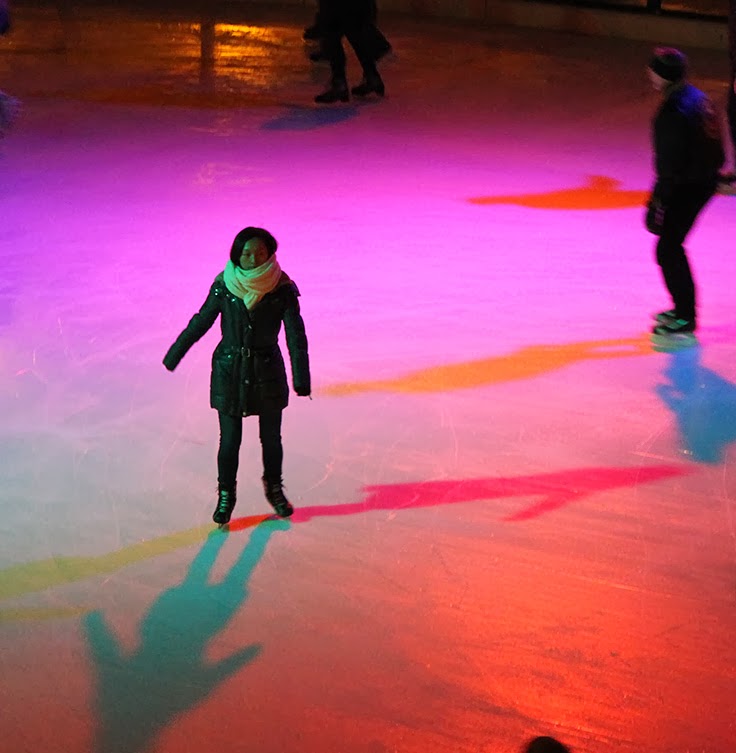 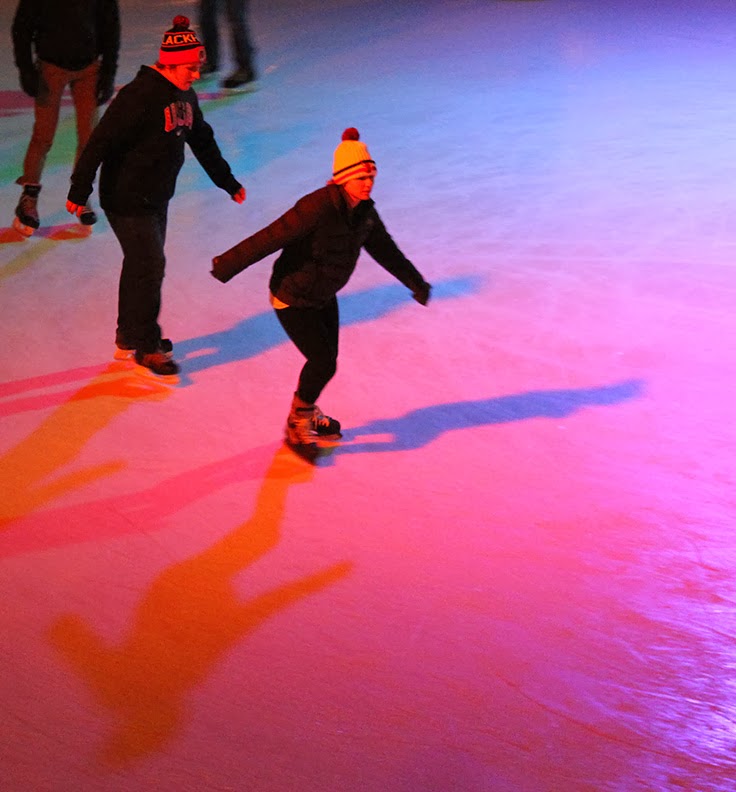 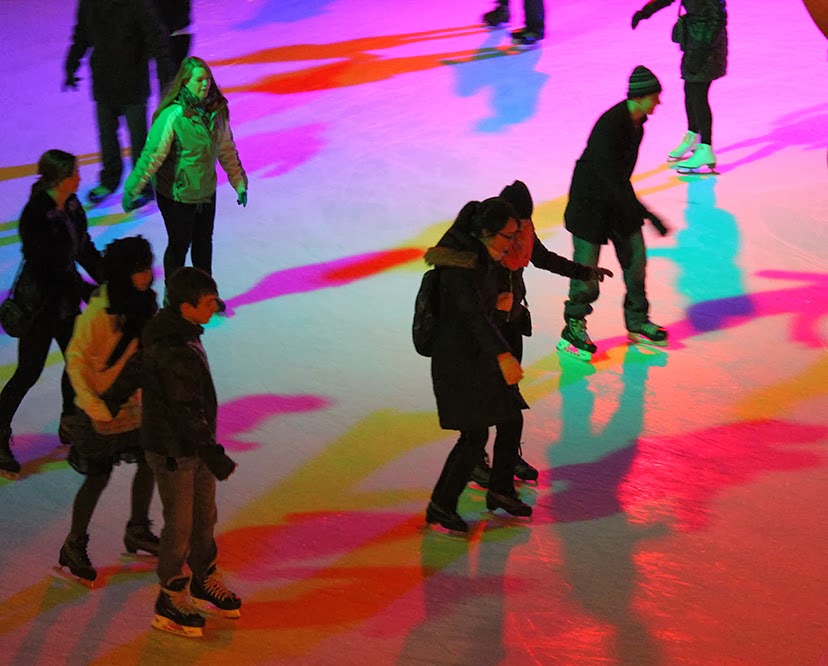 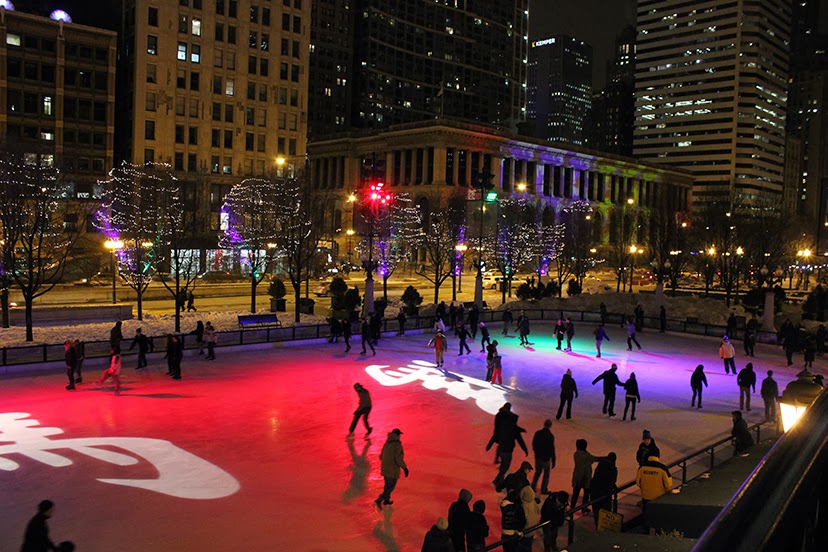 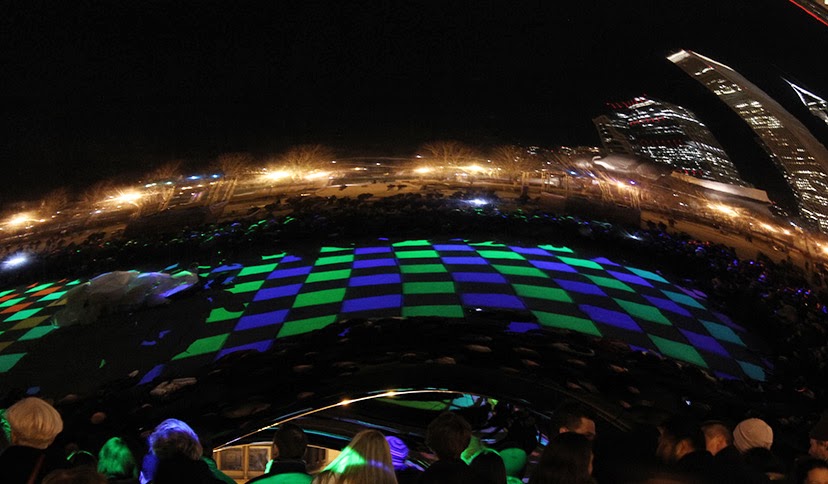 Chicago Rediscovered in a Luminous Field, at Cloud Gate in Chicago's Millennium Park

Anyone remember ice skating at rainbow on lawrence &clark ?