The problems started almost at the beginning.  The 60-story, ultra-luxury Elysian Hotel, one of the most ambitious designs of retro-architect Lucien Lagrange, was conceived in the midst of the great hotel condo bubble, in which large numbers of otherwise sober investors convinced themselves there was a looming boom market in people wanted to allow the luxury condos they owned to be rented out as hotel rooms when they weren't using them.  This high concept started to die almost as soon as it was born, with the 2008 crash providing the coup de grace. 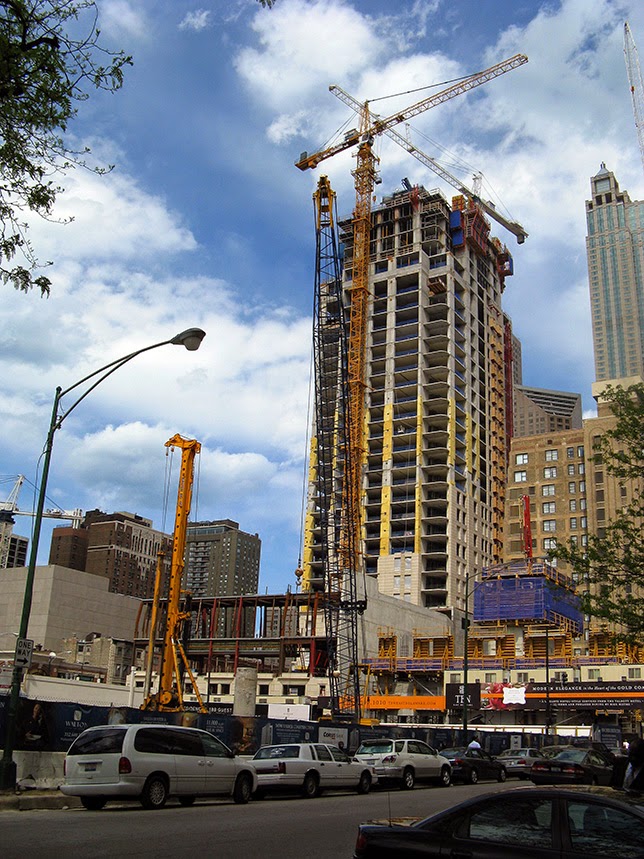 Little more than a month before the Elysian's 2009 opening, its 188 hotel condos became simply 188 hotel rooms.  The late chef Charlie Trotter, lined up to run the hotel's dining room, backed out of the project.  Investors who loaded up on high-priced condo's expecting to quickly flip them in a boom condo market often found themselves, after the crash, holding on to their investments far longer than they expected and selling out for far less than they had imagined. 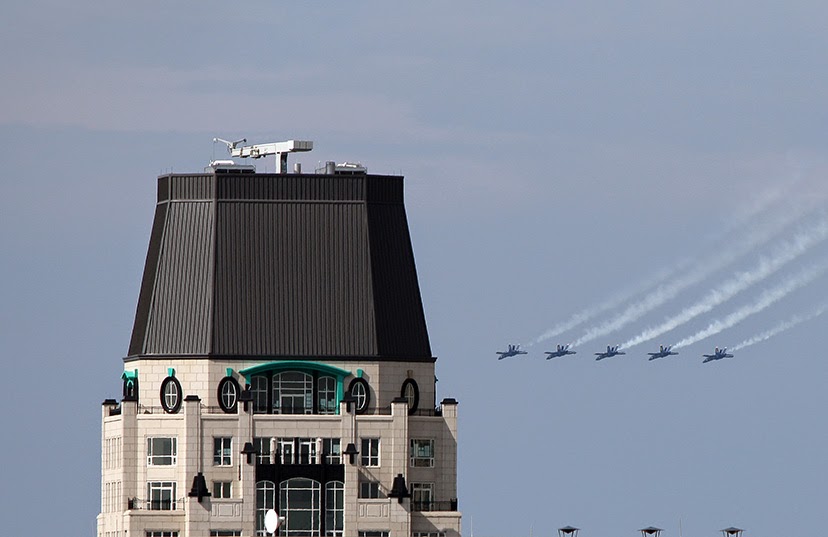 That didn't stop the hotel from winning rave reviews and immediately taking its place at the top of the luxury heap, rated number one in the nation by  U.S. News and World Report and the readers of Conde Nast Traveler.

Unfortunately, condo sales only paid back part of the Elysian's $263 million cost, so when the Bahrain-based investors who owned the project grew restless, the hotel portion of the building was sold in 2011 for $95 million to a group led by billionaire Sam Zell.  The Elysian would not only not spawn a new chain of ultra-lux siblings, it's name was erased, taking on the branding of its new operators, Waldorf-Astoria, which has been much more successful leveraging a storied New York hotel whose name had become synonymous with luxury into a chain of over two dozen properties worldwide. 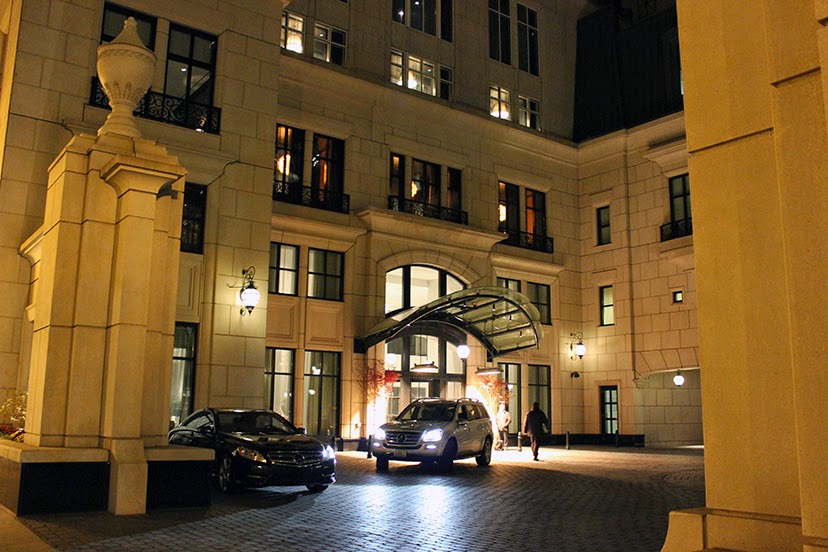 While the tower's interiors feature the best of modern amenities, the distinction of Lagrange's design drew from his commitment to keeping alive traditions that were dead long before he was born.  The stripped-down French Second Empire style offers a classically detailed courtyard that allows monied residents and guests to imagine themselves old-school royalty pulling up in their carriages even as the lower orders are kept safely outside the gates. 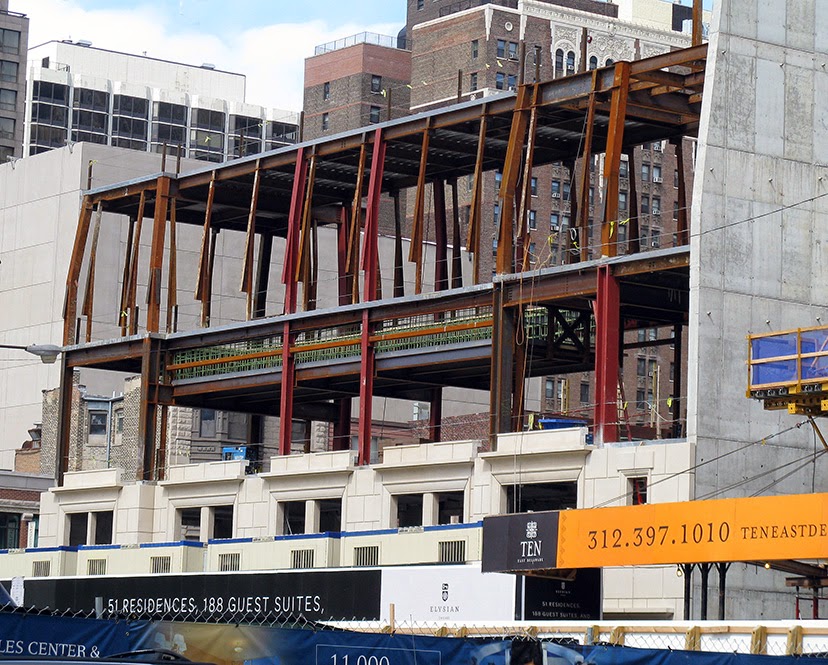 Enveloping the carriage court to the south and west is a four-story pavilion, complete with Mansard roof.  The roof is supported by metal rather than wood, and covered not with felt but steel, making it look less like classic Paris and more like an extended Quonset hut, but it's the thought that counts. 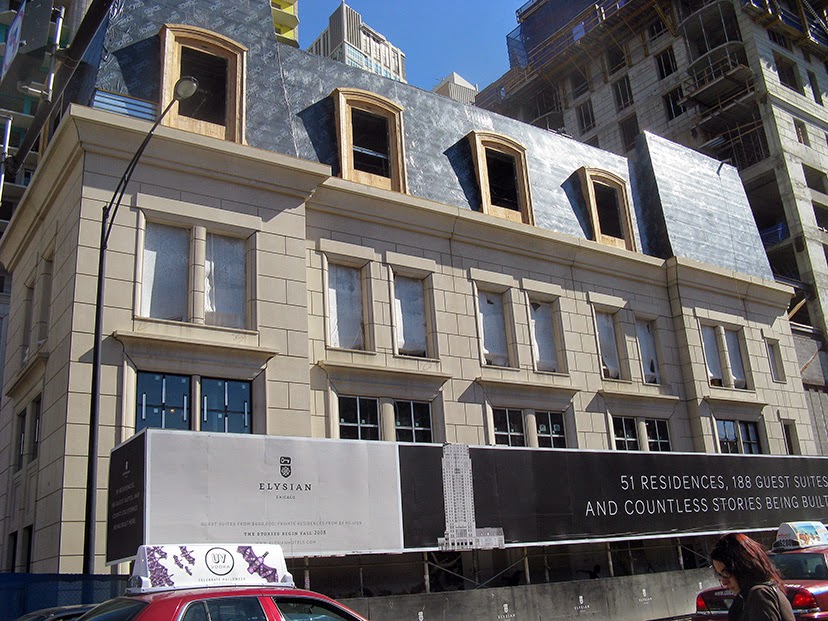 Yet even here, trouble lurked just under the surface.  Along State Street at Walton, a 1,650 square-foot retail space was occupied by a fashion boutique with the now ironically prophetic name of Perchance.  According to a report by Micah Maidenberg in Crain's Chicago Business, Perchance, in a lawsuit filed just this month, claimed their high-end space was beset with “leaking pipes, mold and a lack of heat.’  Then, early in January, as a numbing deep-freeze held Chicago in its grip, the store was flooded by a burst pipe.  It closed, and has not reopened, leaving behind only stripped shelves and naked mannequins. 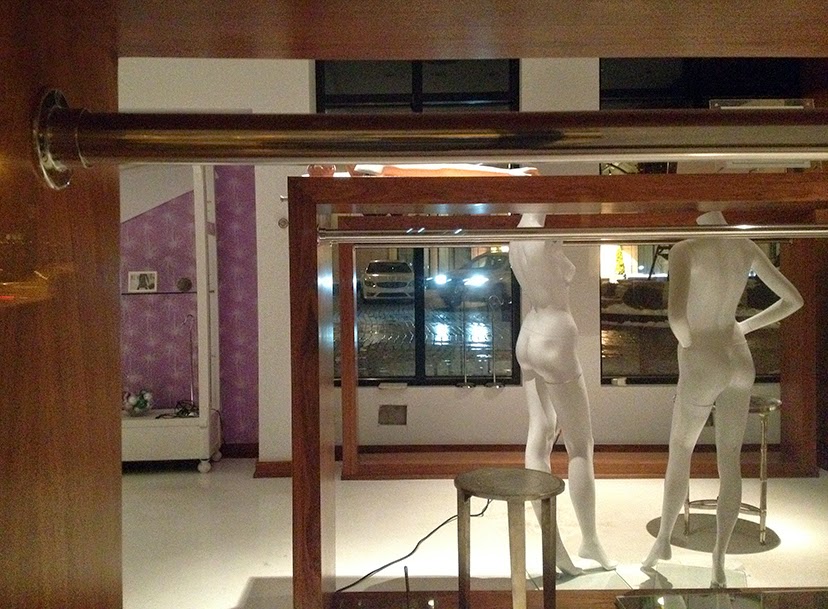 Just weeks later, the Waldorf's 6,738 square feet of retail space was acquired by Acadia Realty Trust for $44 million, translating to a whopping $6,530 for each precious square foot.  Despite the sky-high price, Crain's reported that Acadia considered the purchase a safe investment.  So it must have come as a bit of disappointed when Perchance, less than one year into their ten-year lease, stopped making payments on their $2.6 million annual rent.  A day before Acadia fixed the pipe in March, Perchance gave notice it wasn't coming back.  Acadia declared the retailer in default.  Late this month, Perchance filed a countersuit, alleging the space had been incompetently constructed. 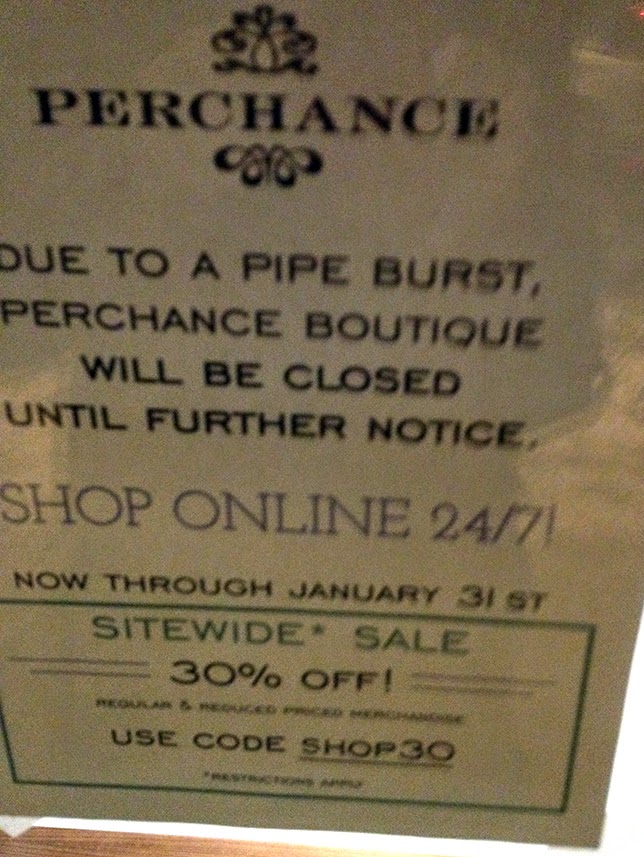 Really, for a building that's only five years old, there's enough colorful mishaps to fill up a cable reality show.  But we've saved the best for last. 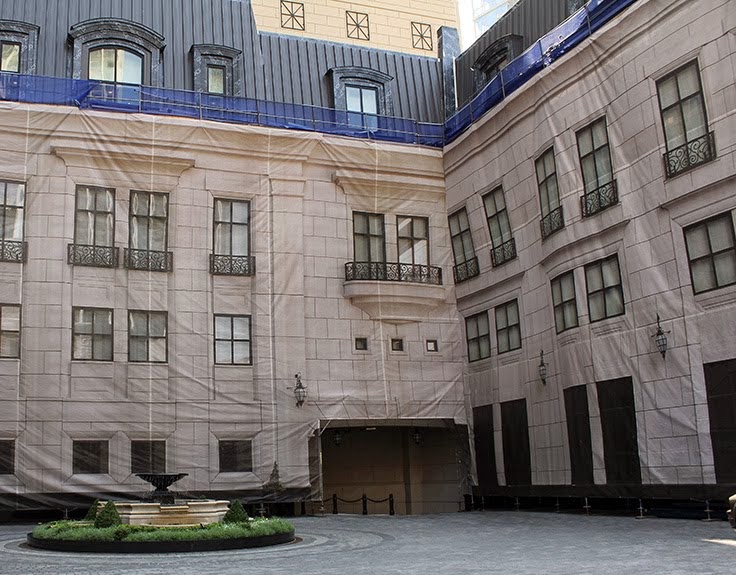 Just a year after the tower's opening, the facades surrounding the courtyard already required some major touch-ups.  No ugly pipe-metal scaffolding here, however.  The repair work was covered up with an exact photographic fabric replica of the actual facades.  Being fabric rather than stone, the fabric didn't hang exactly straight, and was prone to wrinkles, creating, for a brief time, one of the more delightfully surreal sites in Chicago architectural history, a phony copy cover-up for a phony copy of an expired style.  You can read more and see how it looked in my post, The Limp Building:Lucien in Dali-land, or The Persistence of Mediocrity.

I'm tempted to claim the building has become possessed by the Curse of Walton Street, but through it all, the Elysian Waldorf-Astoria soldiers on, at once one of Chicago's most desirable luxury locations, and something faintly absurd, probably the world's only luxury hotel tower whose shaft resembles a twist-top glue stick . . .

I had occasion to dine in the Elysian/Waldorf several weeks ago. The design was sufficiently over the top faux pluto-classical that I had the sense that the architects were in on the joke, but perhaps the residents weren't

I miss the LoCal Zone! Seriously, this style is joke city, I see it as well in those ostentatious boxes that replaced century + old homes along streets in LP and LV as well.

55 East Erie is much more of an embarrassment, with it's barely noticeable BIG WHITE BOX on it's roof. Perhaps the architect thought that we wouldn't
notice.

I thought adding the black window surrounds at the top was a mistake. And the courtyard just seems weird for such a tall building.